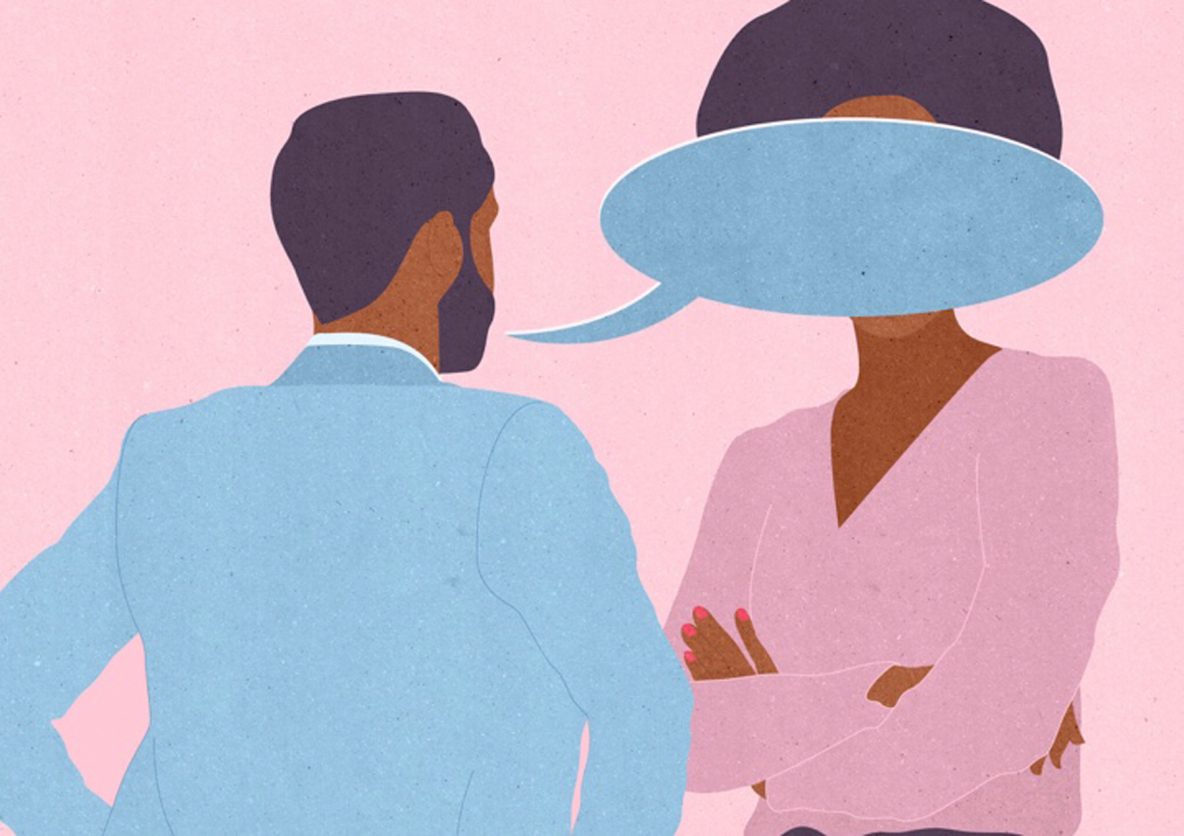 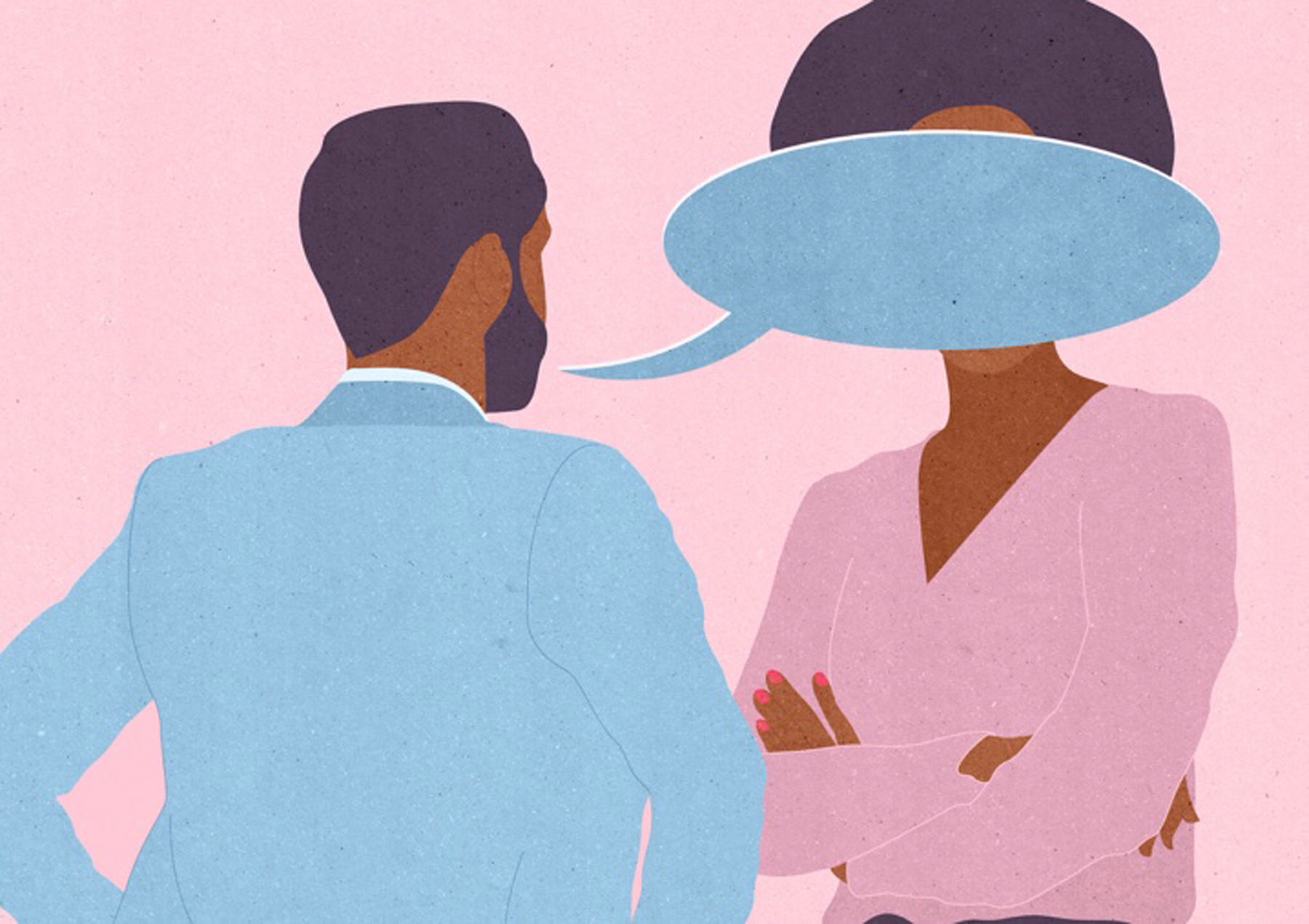 Mansplaining illuminates a much deeper problem than the bore of patronizing monologues. “Entitled” author Kate Manne unpacks the phenomenon.

— The girl, from “Hills Like White Elephants” (1927) by Ernest Hemingway

It’s common. It’s cringeworthy. And it’s been documented, some might argue, since at least the 17th century. It happens on Twitter. It happens at work and at Thanksgiving dinners. In barrooms and in classrooms. Famous men do it. Uncles do it. Politicians, colleagues, bad dates, bureaucrats and neighbors do it. (Some of you may do it, ironically, in response to reading this.) Yes, we’re talking about mansplaining.

The portmanteau describes the act of a man’s unsolicited explaining, generally to a woman, something he thinks he knows more about than she does — occasionally at anesthetizing length — whether he knows anything or not.

The apt articulation of this phenomenon began with Rebecca Solnit’s 2008 essay, “Men Explain Things to Me,” which describes a conversation with a man at a party whose “eyes were fixed on the fuzzy far horizon of his own authority.” After he discovers that Ms. Solnit’s latest book was about the British photographer Eadweard Muybridge, he cuts her off, to pontificate, relentlessly, on a “very important” Muybridge book he thinks she should read.

Turns out, it was her book. And he hadn’t read it.

By Ms. Solnit’s telling, it took three or four interjections by her friend to get through to the mansplainer that Ms. Solnit was indeed the author, before he finally heard it. Tellingly, it also took time for Ms. Solnit to recognize the book he was referring to was in fact her own: “So caught up was I in my assigned role as ingénue that I was perfectly willing to entertain the possibility that another book on the same subject had come out simultaneously and I’d somehow missed it.”

“Mansplain,” a word that reaches far beyond the borders of the United States, was inspired by that essay. Today, an ever-evolving list of international iterations exist. In German, it’s “herrklären.” In French, “mecspliquer.” Italians have “maschiegazione.” There’s a Spanish version of mansplain, and there’s a word for it in Russian, Arabic, Hebrew, Hindi, Mandarin, Ukrainian, Japanese and dozens of other languages.

Mansplaining illuminates a much deeper problem than the bore of patronizing monologues. As Ms. Solnit notes, it “crushes young women into silence” by telling them “that this is not their world.” She adds, “It trains us in self-doubt and self-limitation just as it exercises men’s unsupported overconfidence.” More than a decade on, why is men’s interruption of women to explain things — often things they know less about than the women to whom they’re explaining — still so common?

Kate Manne, an associate professor of philosophy at Cornell University, explores the issue in a chapter of her new book, “Entitled: How Male Privilege Hurts Women.” On a recent call from her home in upstate New York, where she lives with her husband, their 8-month-old and a corgi, she unpacked the problem.

How did we arrive at the idea that men are the authorities of knowledge?

Mansplaining may be recently named, but it’s most likely a phenomenon as old as time. Inherent in patriarchy is men’s entitlement to all valuable human goods: things like love, care, adoration, sex, power — and knowledge. When it comes to knowledge, especially of a prestigious sort, the idea that men have a prior claim to it is as venerable as the patriarchy itself. Sometimes it’s connected to the idea that women are incapable of being authority figures. In “Politics,” for example, Aristotle wrote: “The slave is wholly lacking the deliberative element; the female has it but it lacks authority.”
Editors’ Picks

We know from the classic “John vs. Jennifer” study at Yale that both men and women hold biases that women are less competent. Is this an essential part of mansplaining?

Absolutely. Part of what’s going on is the presumption that a woman will be less knowledgeable, less competent and somehow in need of a man to explain things to her.

That doesn’t explain the fact that mansplaining often also involves men’s resistance to evidence that the woman is more knowledgeable on the subject than he is, and sometimes, the anger when that turns out to be the case.

Why do some men mansplain even when they know of a woman’s qualifications?

I connect it to the sense of entitlement of certain privileged men to be the expert, the knower in the exchange. Whereas, paradigmatically, the expert woman is the ingénue, in need of his injection of information, as Rebecca Solnit put it.

You say “privileged men,” but men who are less privileged, aside from their maleness, also mansplain.

While it tends to be worse with men who are more privileged, there’s a powerful gender dynamic where he’s often been socialized to feel like he’s the authority.

Girls, on the other hand, are socialized to be pleasing and polite, to not embarrass men …

Absolutely, there’s a very strong sense in women that she should provide a pleasant audience to him, one that doesn’t interrupt him. Correcting someone is an inherently hierarchical act. It’s saying “You’re wrong; I’m right.” Jumping in when he’s mistaken or less expert is inverting the gender hierarchy. Even though a woman is perfectly entitled to intervene, it’s perceived by men who feel entitled to a smooth exchange as socially abrupt, rude and even a form of violence. Because it disrupts the status quo and overturns his position as the default authority in the exchange.

Yes. It’s linked to the sense of entitlement to be the knower and the one who issues explanations. That sense of epistemic entitlement makes it very natural to speak over others, and to hold the floor for longer than is proper. It also makes men more willing to assume the floor. A 2004 study of Harvard law students found that men were 50 percent more likely to offer at least one comment in class, and nearly 150 percent more likely to volunteer to speak three times or more.

What’s an example of mansplaining in culture?

In Ernest Hemingway’s short story “Hills Like White Elephants,” a man and his pregnant girlfriend sit at a bar, waiting for a train. He tries to convince her that having an abortion is “perfectly simple.” As well as making no space in the conversation for her own reservations, desires and plans, he keeps repeating himself. Finally, the woman has enough: “Would you please please please please please please please stop talking.” As a reader, it’s hard not to echo her sentiments.

“Himpathy” is the idea that we feel sorry for men even when they’ve behaved abhorrently. How do himpathy and mansplaining go together?

Himpathy is what I think of as the excessive or undue sympathy given to men over their female victims in cases of misogynistic behavior, like sexual assault. Himpathy and mansplaining interact by making us feel sorry for men we would otherwise sharply correct. We feel preemptively sorry for him if he would feel humiliated, or even chastened, by being corrected. And it makes us feel guilty, or even ashamed, for thinking of it.

To avoid being a mansplainer, what should a man ask himself?

Is she interested? Did she express some desire to have this information imparted to her? Do I know this? Is she more expert than I am? Might she be asking a merely rhetorical question?

Maybe look at her face?

[Laughs] Yes, read the room. If other people are registering profound discomfort, that might be a sign that you’ve made a misstep in the dialogue.