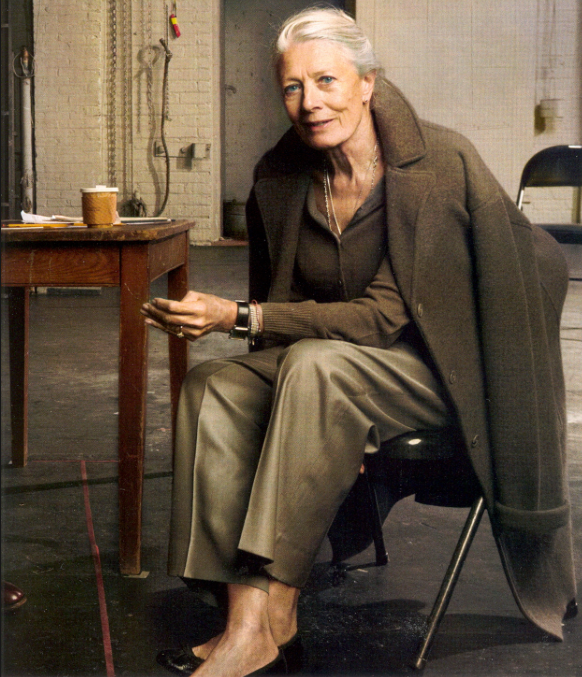 I have loved Vanessa Redgrave since I saw her in Julia, where she played a woman so moved by her convictions she is willing to risk her own life. I suspect the Vanessa Redgrave, actress/activist wasn’t too far removed from the character she played.

At 80 she has made her directorial debut with a documentary about the refugee crisis.

Below is the interview she did with Lateline about why she felt moved to make it.

Also her take on true love after marrying her second husband Franco Nero. Not part of that interview but I love what she has to say………

Redgrave spoke to Lateline about the film, Sea Sorrow, which she said she and her producer son Carlo Nero have poured all their money into.

“Life doesn’t plan itself like that and I certainly didn’t plan my life like that,” she said.
“I didn’t plan that there’d be this awful situation in which our European governments, just to start the story off, breaking the Geneva conventions on the protection on the human rights of refugees.”
Image of Aylan Kurdi prompted her to make film

“People talk about preaching to the converted which is total codswallop rubbish. There is no such thing as being converted forever, absolutely no such thing,” she said
“You can get numbed, people can get hardened, it’s not their fault, they just get hardened, news media get hardened, proprietors get even harder.
“So it’s a film to keep the heart and the brain warm and responsive and thinking, that’s what we’ve tried to do.”
On Australia’s refugee policy

“The fact is the Australian Government is breaking international law,” she said.
“They pretend they’re not, and I use the word pretend because all the politicians — it’s not a party political question, all the politicians bar one or two are guilty.”
Topics: unrest-conflict-and-

And On what love means to her

Was it true love that brought you together after so long apart?
Concepts are empty until each person finds what’s true about them. True love is what has endured and come through lots of things — tragedies or upsets or violent temperamental disagreements. Some people find true love much earlier and keep it. In my own case, true love comes with constantly learning about the people you love and keeping your eyes open and caring about them and listening to them. And rediscovering them. Whether it’s friends or family or children. Or a husband.