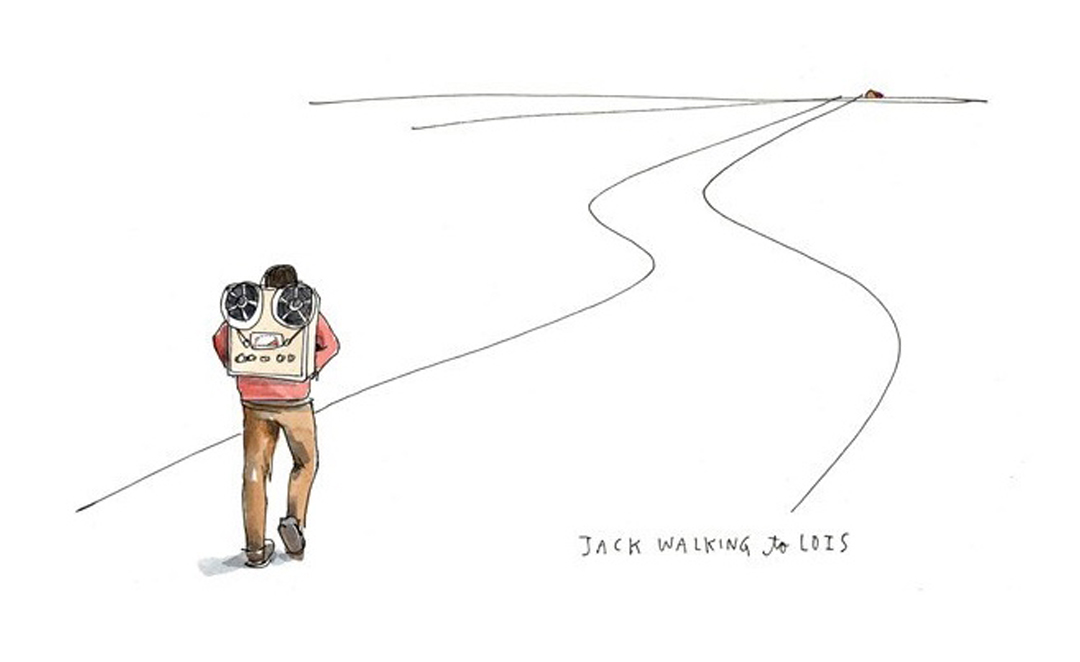 This is such a beautiful love story about Jack Kerouac I had to share, its from the wonderful Brainpicking's site....link below

Love, Kindness, and the Song of the Universe: The Night Jack Kerouac Kept a Young Woman from Taking Her Own Life

In the late 1950s, a young woman named Lois Sorrells Beckwith did what many passionate book-lovers find themselves doing — she fell in love with an author through his work; not with the writing alone, but with the man. That man was Jack Kerouac and the book that tipped Lois over the edge of infatuation was his newly published novella The Subterraneans (public library), a semi-fictional account of a fervid romance.

But then Lois did something few ardent readers would dare to do.

A native New Englander then living in California, she moved back to the East Coast and, one fateful afternoon in 1958, mustered the timid brazenness to drive herself to Kerouac’s home in Northport, Long Island, hoping to meet him. She pulled up to the house and found him sitting under a tree in his front yard, meditating — a practice he had taken up some years earlier as he plunged into Buddhist philosophy.

So began a romance that lasted many years. Lois was twenty-three. Jack was thirty-six and had just published On the Road, the novel that would become a counterculture classic and catapult him into literary celebrity.

“I had fallen in love with the soul of this man,” Lois — the mother of my friend Sebastian Beckwith, whom I know through the wonderful and talented Wendy MacNaughton — tells me as she looks back on this unusual and electrifying adventure in love and literature.

The relationship continued, on and off, for years. The “on” phases were intensely beautiful — the two shared an apartment in New York’s Greenwich Village, an epicenter of the era’s creative culture, which they relished fully. Lois recounts:

We were drinking lots of wine and dancing and making love and listening to him read.

They went to poetry readings together and listened to music and led a life that Lois remembers as “pretty fast-paced and exhausting.” But it was also incredibly tender — every time he left the apartment, Jack wrote Lois a sweet note.

Writing, indeed, was not only what had brought them together but what kept them together. During the “off” phases, they wrote each other letters that sustained their romance. But marriage was never something either of them desired. Jack had already been married and divorced twice. Lois has fallen in love with his writing and respected it as his greatest commitment. She reflects:

I felt his pain deeply, and his beauty, and his knowledge. And I loved being with him. But I never thought of marrying him — he was a writer, and he had to write.

And then Lois lost her mother, with whom she had been incredibly close. Gutted by grief and mired in a thick depression, she went to stay with her father for a while.

Late one night, there was a knock at the door. It was Jack, with an enormous reel-to-reel tape recorder strapped to his back. Already one of the country’s most famous writers, he had been away on a book tour when he received Lois’s letter about her mother’s death and her depression. Terrified that she might commit suicide, he had flown in, walked five miles from the other side of town with the giant device, and come to play Lois a song to lift her spirits.

This man, in whom the tender and the troubled always coexisted, had recognized in his beloved the wounded part of himself. He had extended to Lois the comforting care he was ultimately unable to grant himself. Lois recounts:

As he became more famous, he drank more — it was very sad.

“Practice kindness all day to everybody and you will realize you’re already in heaven now,” Kerouac himself once wrote, and in this enormous gesture of kindness, he had transported himself to heaven, if only for a night.

Eventually, the couple parted ways as lovers but remained friends. In fact, it was Jack who introduced Lois to her husband, who became my friend Sebastian’s father.

And then, many years later, something unusual happened.

One day, when Lois was about to turn eighty and Jack had been dead for nearly half a century by the troubledness that eclipsed his radiant spirit, a piece of paper fell on her floor as she was moving some papers at home. On it, the phrase “universe — one song” was written in the handwriting of her youth.

Lois immediately remembered a vivid dream she had had all those years earlier, in that New York apartment. She recounts the dream:

I was just walking around on a very hot, sultry night — it was exciting, sensual — and I heard the most exquisite music. I asked someone what it was, and they said that it was the voices of all nationalities speaking. The dream was all about kindness — this huge love and kindness — so it made me think of Jack on the night of his heroic five-mile walk. And that’s still what I think about when I think about Jack.

Moved by the memory of the dream and Jack’s generous gesture, Lois penned a poem in remembrance of his kindness. Here she is, at eighty, reading it: