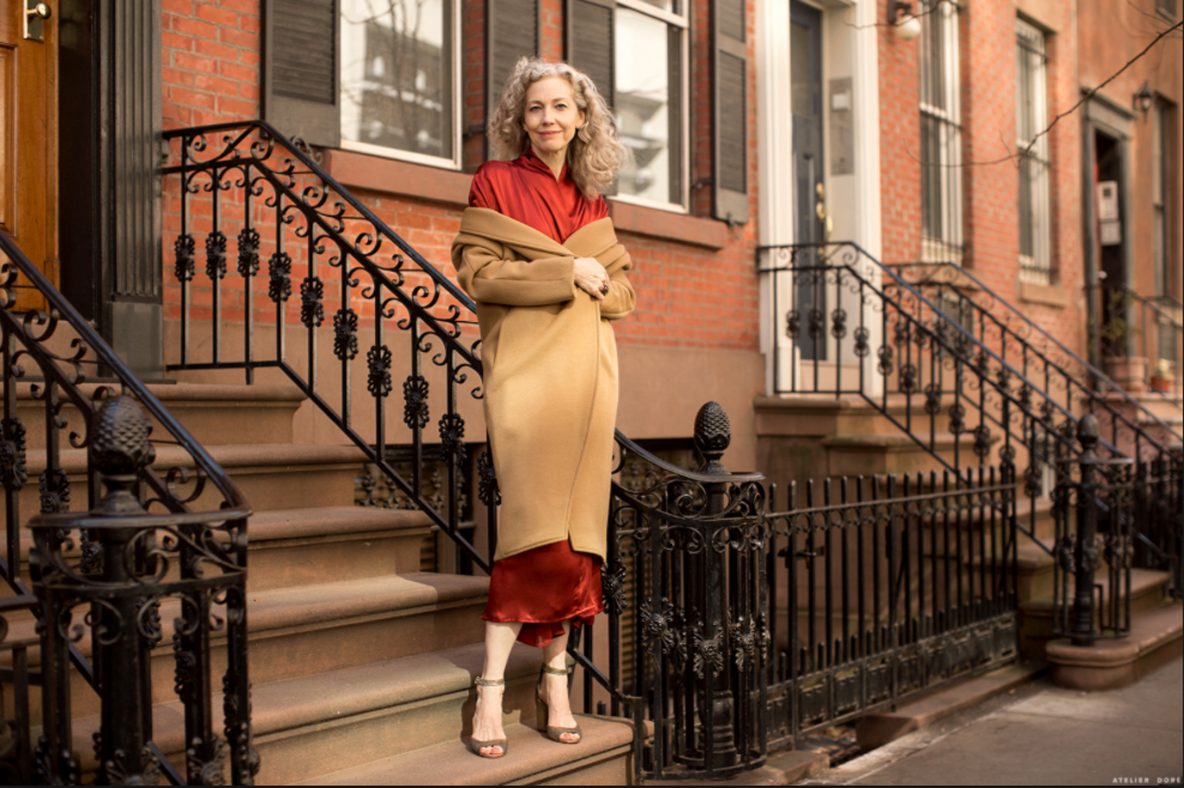 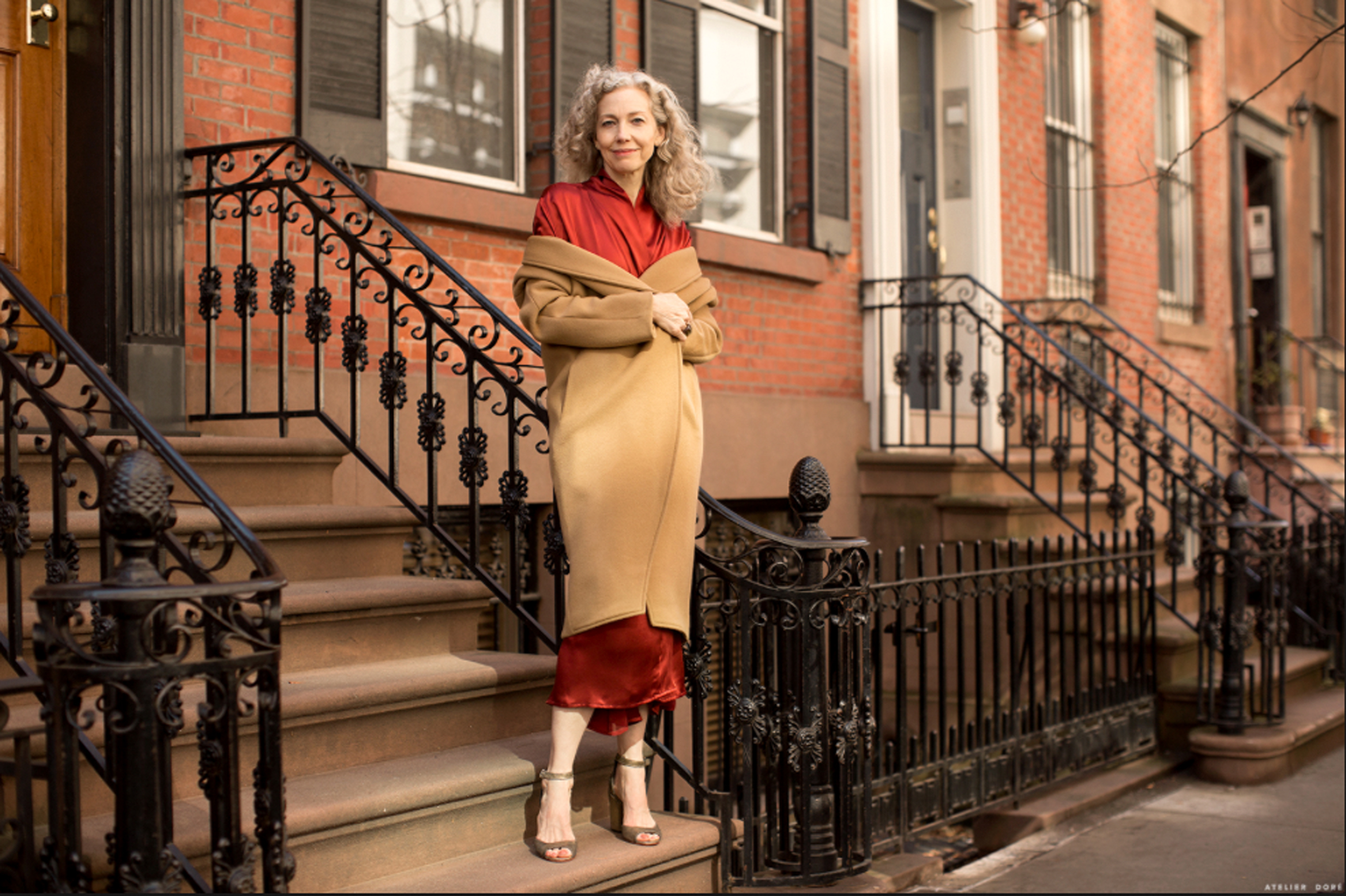 This blog about the beautiful Jocelyn Beaudoin who now works as a model, she started her new career at 59, has been borrowed from …. combination image from Garance Dore blog and the interview from the silver women Blog… Oh and buy a red dress!

Women who inspired you as a young girl?

My great grandmother, Mary Flammand. She was born in Canada. Her family were Irish immigrants who established themselves in a rural area near Quebec City and switched their language to French. She was happily married to a French Canadian man, but he died a few days after she gave birth to their ninth child. She raised her family on her own by starting a bakery in the basement of her house, and a lumber business from her land. When her youngest child reached 18, she remarried to a widower who had nine kids of his own, all under the age of 12. He died suddenly, a few months later. She raised all those kids. She married again three more times and was a widow again three more times. Meanwhile, her business grew and when she died in her late 80s she was rather well off. She was always upbeat, never complained, had a wicked sense of humor and wit. We were friends and wrote to each other until she died.
My other inspiration was Claire Bretecher, a French cartoonist, known for her mordant humor on woman and gender issues. She is a sharply insightful observer of daily life, always delivering a funny and astute social commentary with her wry cartoons (bandes-dessinées). She was very successful in the then exclusively male French cartoonist world of the 60’s and 70’s in Paris. Other inspirations as a young girl: Jeanne Moreau, Debbie Harry (Blondie), Eileen Gray, Granny May (from the Beverly Hillbillies), Jodie Foster, Françoise Hardy.

Women who inspire you now?

My friends.
They inspire me with their stealth, their ability to negotiate multiple responsibilities at once, remaining forever charming, stylish and witty. The mothers who juggle demanding careers and manage to raise balanced, well-adjusted humans especially inspire me. I observe their daughters with interest, wondering how they will turn out as adults. These women are fierce beacons.

Most valuable lesson taught by your mother?

If you are going to do anything, give it your best effort or don’t do it at all, even if it’s the simple act of washing dishes.
Another one from her: Sometimes it’s best to keep your mouth shut and let events unfold on their own (still working on that one).

Have you made career changes over the years?

Sort of. I went from working as an art director and production designer in feature films and TV commercials to being a set designer and prop stylist in commercial photography.
Same job, different context.

20s: I wish I had been less shy and tentative in general and more confident of my skills and talents.

“Being a set designer 30 years ago, I had to take a deep breath before walking into a lumber store, I would get treated with so much condescension and snickering, same when I had to deal with grips and electrics on set. The only way to survive was to know as much as they did about what I needed.”

Nowadays, this doesn’t happen anymore. In Canada, where I grew up, it was considered gauche and rude to be assertive as a woman. Moving to NYC in my mid-twenties was a huge kick in the pants. It was do or die, so I had to quickly learn how to sell myself.
30s: I had success in my career and I attained my ultimate goals of designing movies, music videos and TV commercials but I seemed to have a hard time monetizing my skills. I did an awful lot of work for very little money. I wish I had been more business savvy, enterprising and more socially aggressive in expanding my network (this was not a concept at the time) however I was fortunate enough that my job took me all over the world on great projects.
A dream come true!

40s: As my career was well established I gave a little more attention to my personal life. In my early 40’s I went from being a single city girl, devoted to her career, to being married to a widower, with three young adult kids, a live-in toddler grandson, a house in the suburbs, three cats, a dog and a ferret. Obviously, my life expanded 150% overnight! A very welcome expansion but a 360º turnaround, to be sure.

50s: I live with my husband and our grandson, now a teenager, in the same house, with one dog and one cat. I have enormous energy and “lust for life” to quote Iggy Pop. I will most likely follow my father’s footsteps he retired at 78. I love my job !

The downside …is the sensation that I’m drying up. As a result, I have become a little nuts with eating generous amounts of fats every day: butter, coconut oil, avocado, olive oil, crispy chicken skin, nuts, etc… I have the humidifier on every night in our bedroom, and I refuse to put the heater on in my car unless it’s absolutely freezing. That warm forced air is deadly!
For the brain, I started taking piano lessons again after 40 years, and practice (almost) every night. This definitely keeps the wheels well greased! One more thing I dislike is the creeping sensation that, in the workplace, your opinion doesn’t matter as much anymore. My business is a business of young people, I’m often the oldest person in the room on a job, and I often get stares if I speak up.
The upside… I don’t care as much anymore about how my appearance or my opinions are perceived, I feel like Olive Oil (from Popeye): “I am what I am, and that’s all that I am” As an older person, the formerly prevalent sexual tension that colored every exchange with people (esp. men) has almost entirely faded away, so every little signal that used to be so loaded, is now irrelevant. It is unbelievably freeing: I use to color my hair to hide the gray, I don’t care anymore and have let it grow naturally. I used to never talk to strangers in elevators, or in waiting lines, I don’t care anymore and talk to anyone I feel like talking to. And about my opinions: experience and time have certainly proven to me what works for me, what I was right to believe in from the start, and what I was right to discard as not relevant. So, as I used to be hesitant about many things, now I just know. That’s tremendously empowering. Another thing is that, at this point in life, I have had certain friends for a very long time, and have gone through many trials of life with them by my side. I love this feeling that I have a tribe and I will never get kicked out of this tribe. Lastly, I have now been through serious challenges and know exactly how strong I am and that I can count on myself in times of stress. I might forget my keys or lose my glasses, but I don’t break, I’m solid!

Your advice to young women of today?

“Don’t be a victim! Stand up for yourself; no one is going to do it for you! And never settle; be inflexible when it comes to your core values. Pair up with a partner that is as solid, driven, and independent as you are.
Never apologize for what you believe in, even if it is unpopular.”
–Jocelyne Beaudoin