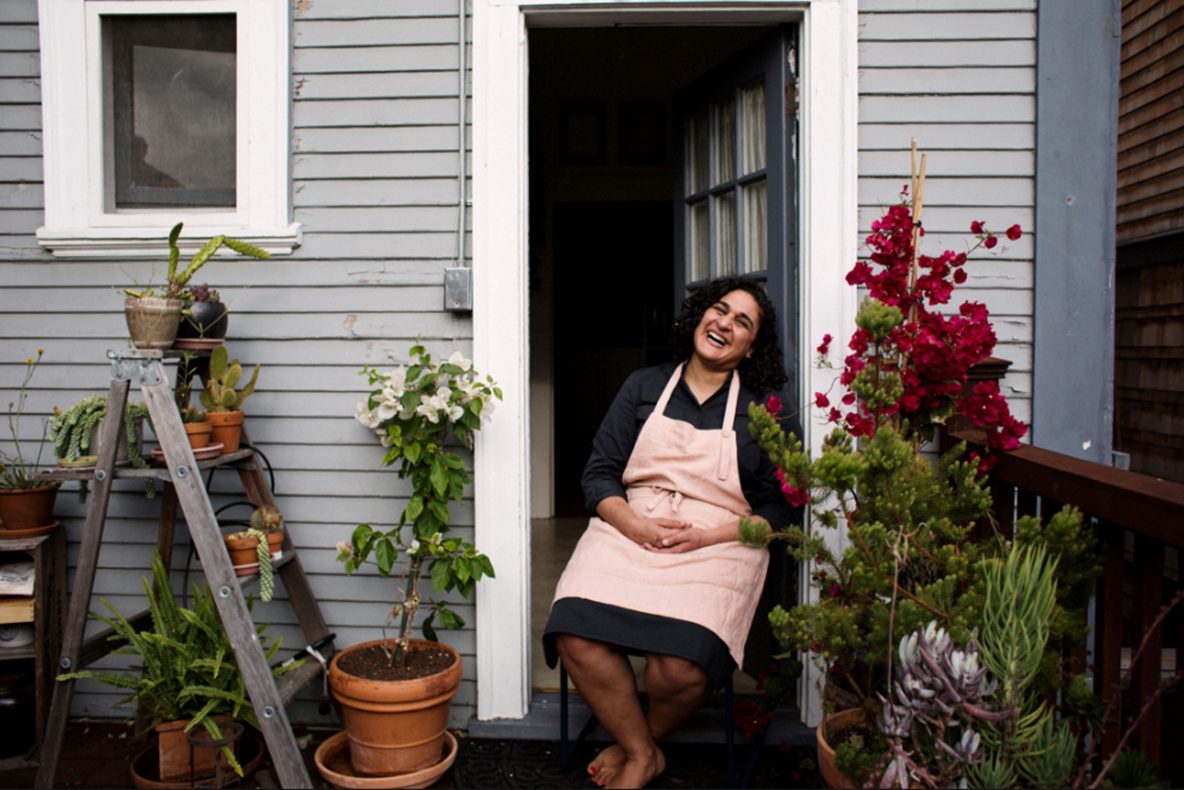 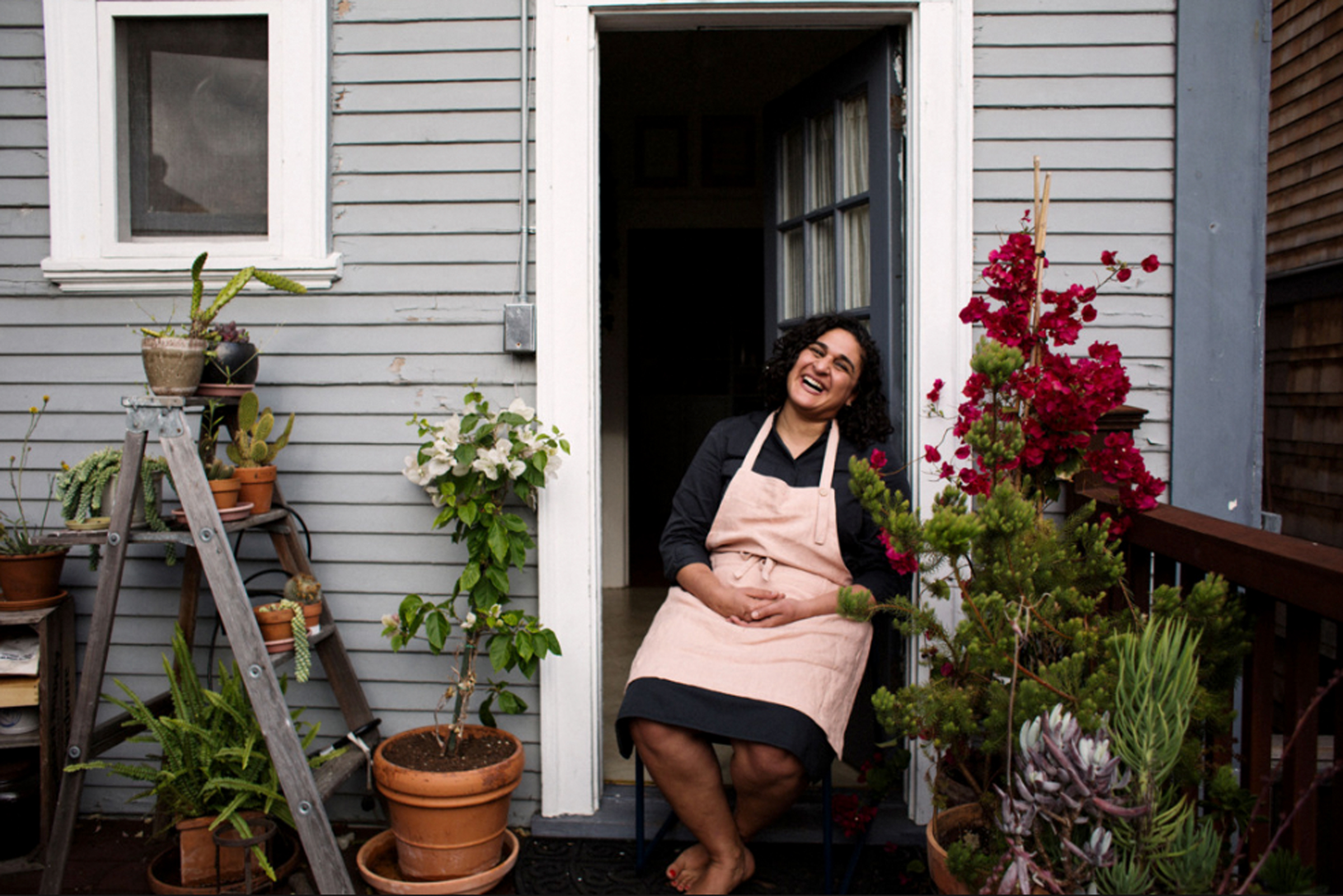 Over the holiday season I will be indulging … slowly watching this fabulous series on Netflix Samin Nosrat’s Salt, Fat Acid, Heat. She is my new food crush, I love her and the trailer for the show.

There’s a perfect word that sums up everything about Netflix’s new cooking show, “Salt Fat Acid Heat,” and it emerges over a meal that the star, Samin Nosrat, is enjoying with her hosts in Japan, where she has just learned the traditional way of making soy sauce. As they tuck into some chicken and rice balls, the elderly woman who has helped prepare the meal laments that the rice balls are not the perfect shape. “The thing I love is wabi-sabi, that handmade quality that makes it human,” Nosrat told her host, using the Japanese term for finding beauty in imperfection.

Wabi-sabi is one of the things that makes “Salt Fat Acid Heat,” named for the four factors of successful cooking and her cookbook of the same name, remarkable. The show and its star exude it. It is Netflix’s first instructional cooking show, and it doesn’t look anything like the rest of that genre, which is too often the domain of cheerful domestic goddesses in glossy, polished kitchens. It’s also a travel show — Nosrat takes her viewers to a different country that exemplifies each component in the show’s title — and it doesn’t look anything like those shows, which are usually full of brash men eating organ meats and throwing back beers, either.

Instead, it looks like Nosrat’s life, beautiful in its imperfections.

“It’s funny, when I first started getting cuts of the show and I would show my friends . . . everyone’s reaction was, ‘It’s really you!’ ” Nosrat said in a phone interview. “I kept asking them, like, ‘What did you expect me to be?’ And they’re like, ‘Well, we thought maybe they would glam you up, or you would be acting differently, but you’re just acting exactly like you act.’ ”

While Nosrat does not cook the way normal people cook — she’s much, much better — she does some of the same things we do. She winces and cries her way through dicing a pile of onions. She makes mistakes, as she does when making a loaf of focaccia, and owns up to them. She throws a dinner party in her Berkeley, Calif., home and serves her guests roast chicken, and no one drinks out of fancy stemware.

“I’m a total ham, and I have no problem being portrayed as a person who doesn’t know everything,” she said. “I think it’s kind of a teaching tool, because if you see that I might mess something up, and yet we keep going and we make something nice, then maybe you’ll feel like you can mess something up.”

And she eats the way real people eat, even while she’s on camera: sometimes taking too big of a bite, so she has to pause and chew before she can speak again. She slurps her pasta. When she eats something she really likes, you can see pleasure spread across her face — her eyebrows arch and her mouth might pucker, before she smiles. “Wow, wow, wow, wow,” she says, when she eats some Parmesan cheese in Italy, an experience that brings tears to her eyes. 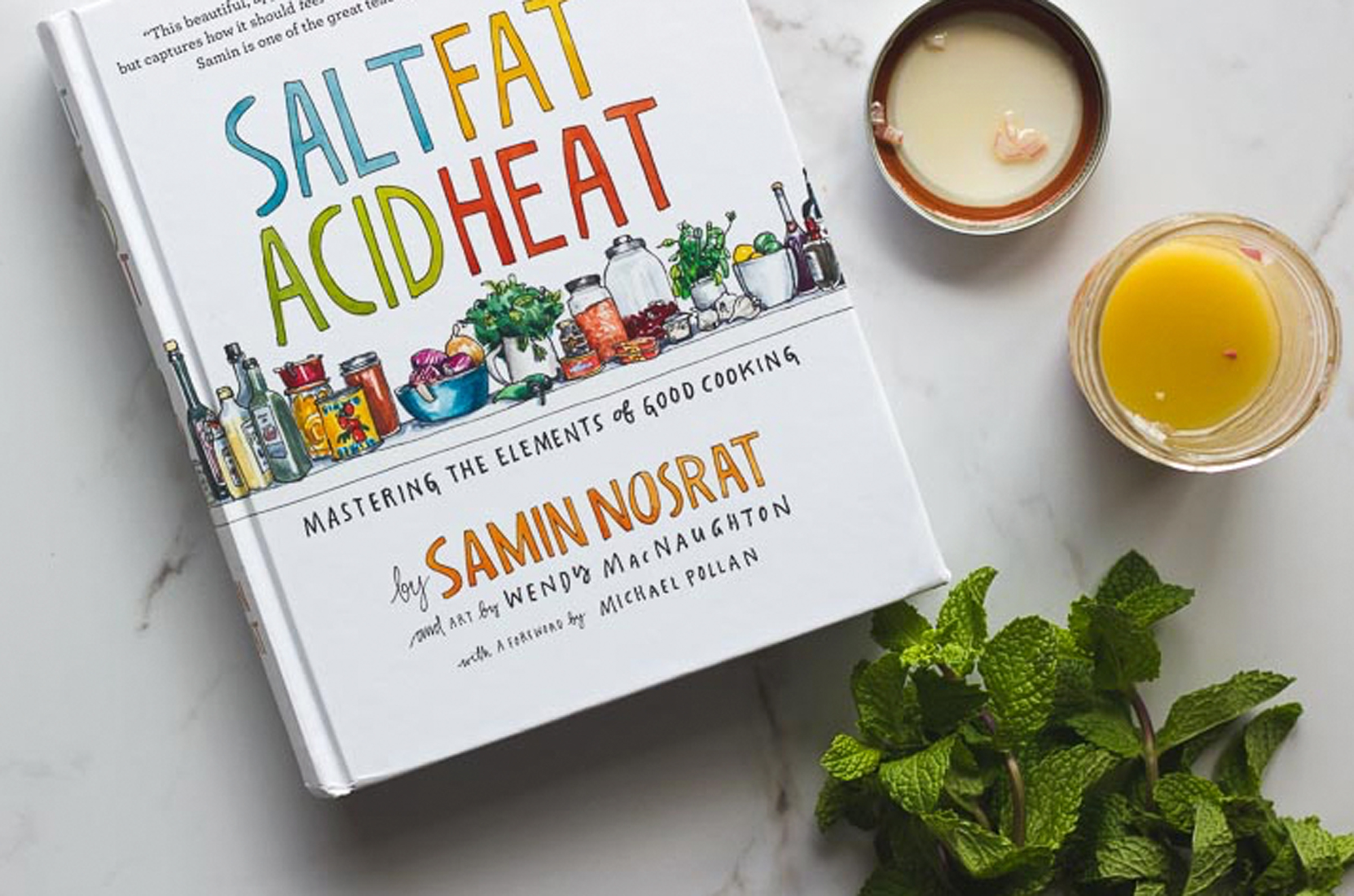 Nosrat samples Parmesan cheese in Italy during the show’s “Fat” episode. (Netflix)
While these are endearing and charming characteristics for a food show, the thing that sets Nosrat’s show apart from others in the genre is who she is. She’s a Persian American hosting a show in a genre where, usually, the people who look like her show up to make food for the white host to learn about — if they appear in the show at all. As for the “stand and stir” instructional element of it, the people who host those types of shows usually have names like Martha, Paula, Rachael and Julia.

“There is a really fine line between being the discoverer and being a curious traveler,” she said. Watching depictions of Persian food on TV, “I am very aware of the feeling of having something taken from you, repackaged, and not being given credit for your own tradition. And that’s something that I never want to do to somebody else.”

That means giving more credit to women, too. One of the extraordinary things about “Salt Fat Acid Heat” is how many women appear in the show. They are there as friends and cultural guides for Nosrat, or they’re the faces of successful artisanal food businesses. Or they’re elderly home cooks, eager for the chance to reveal their secrets. When men do appear, they are often in the background, and only a few of them get a major speaking role.

“The bulk of all cooking has been done by women. And yet, in popular culture and in media, it’s very rarely that women are given credit for that — are honored in any way — and certainly it’s even more rare that home cooks are glorified or dignified or honored in any way,” said Nosrat. Grandmothers are an obvious choice: Not only is it a chance to show a demographic that has historically been ignored on TV, it is a way to get a true expert to show Nosrat what to do. “I feel like there’s something to learn from every single one of them,” she said.

Nosrat tries extra-spicy salsa in Mexico in the show’s “Acid” episode. (Netflix)
“It was absolutely intentional,” that the show shows mostly women, and especially older women, said Nosrat. “There would be times where the producers would bring me a list of people” that was full of men, and she would tell them to go back to the drawing board. Eventually, “we all sort of got on the same page and understood that that was where this train was headed, to mix my metaphors.”

There are only four episodes of the show, which is shot documentary-style, on Netflix. You can binge all of them in one day, though Nosrat hopes you won’t. (“Don’t they know it took me years to make?” she said, laughing.) Each episode focuses on one element of cooking paired with a location: fat in Italy, where she makes pasta and eats prosciutto and cheese; salt in Japan, where she collects seaweed and makes miso eggs; acid in Mexico, where she eats fiery salsa and harvests honey; and heat in Berkeley, where she returns to the restaurant where she got her start, Chez Panisse, to cook over a wood fire. It has an opulent cinematography style, like “Chef’s Table,” but you’ll come away from each episode with practical tips and recipe ideas, too.

Now that the show is out, Nosrat isn’t sure what’s going to happen next (“I’m going to sleep for six months,” she joked). After working nonstop on her book and then the show, she feels like she needs to take some time to “refill my creative juice tank — my green juice tank.” She feels like the impact of the show hasn’t quite sunk in yet.

“Emotionally, definitely it has not hit me,” she said. “Like, you see yourself in Times Square,” where there is a billboard of her face. “What does that even mean?”

“Maybe now if this show is really successful and people see that, then people want to make more shows that don’t follow the same sort of traditional format with the same traditional cast.” It means that when Nosrat thinks back to her childhood and how she wished there was someone on TV that looked like her when she was growing up, she can now be that person for someone else.

It means she can be herself, which was “such an amazing and healing message for me to get in my older age,” said Nosrat, 39. “If I’m okay the way I am, with my funny curly hair that’s frizzy half the time, and I kind of limp because I tore my meniscus, and I make a big mess when I’m cooking, and if that’s special enough to be on camera, then maybe at home, you are special enough, too.” 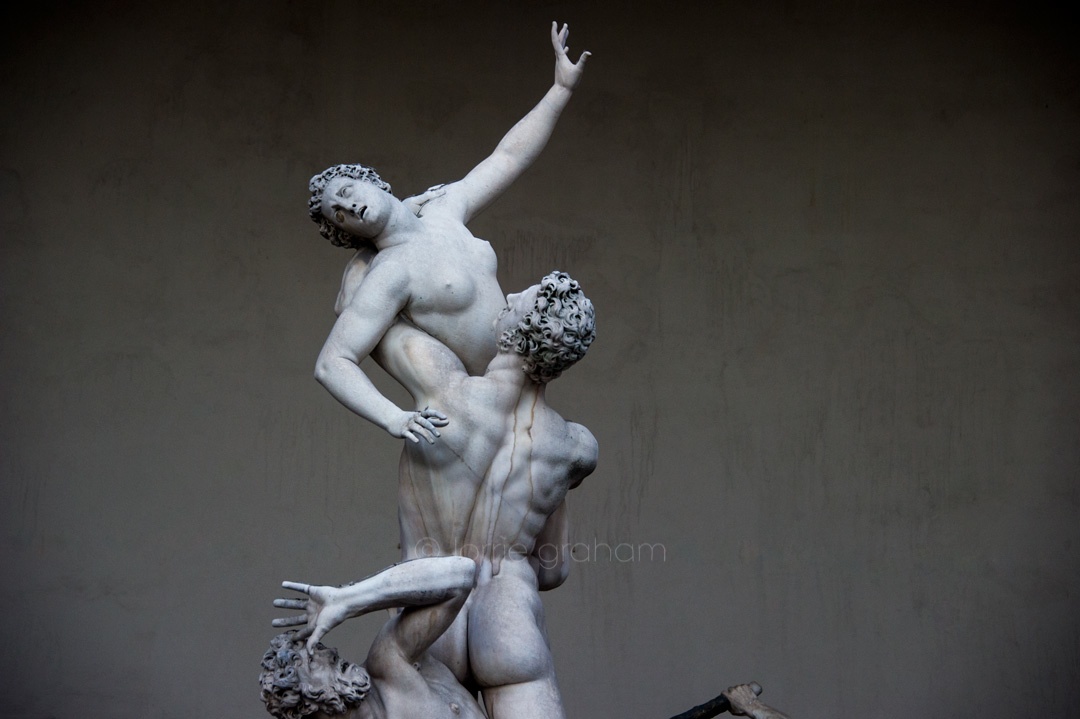 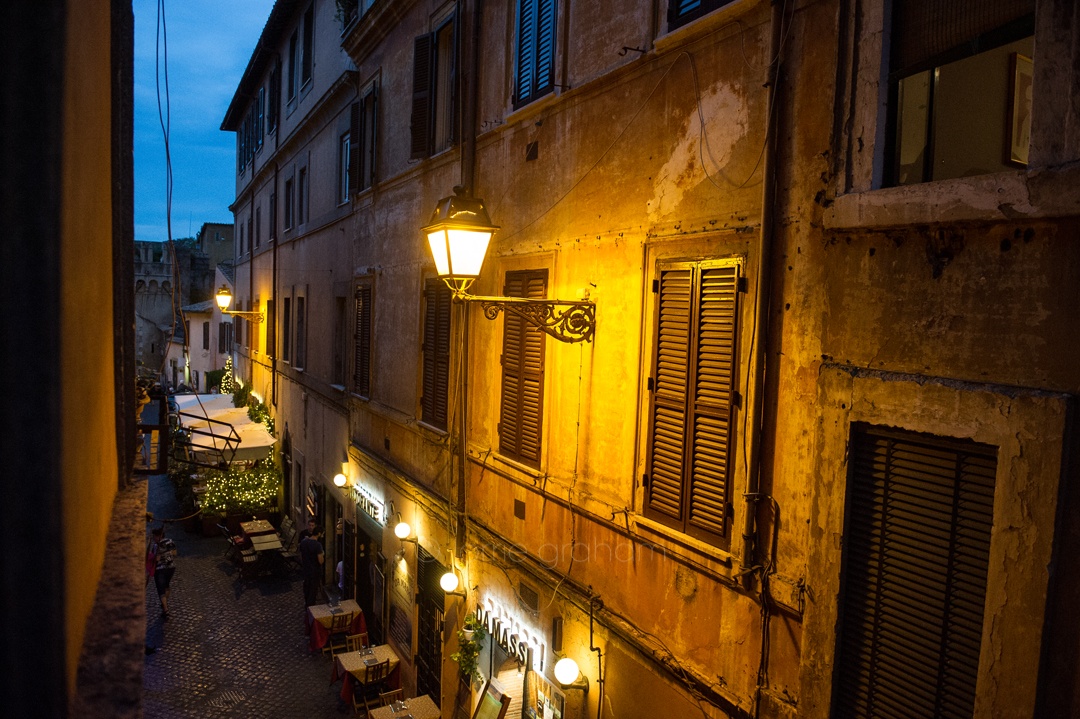 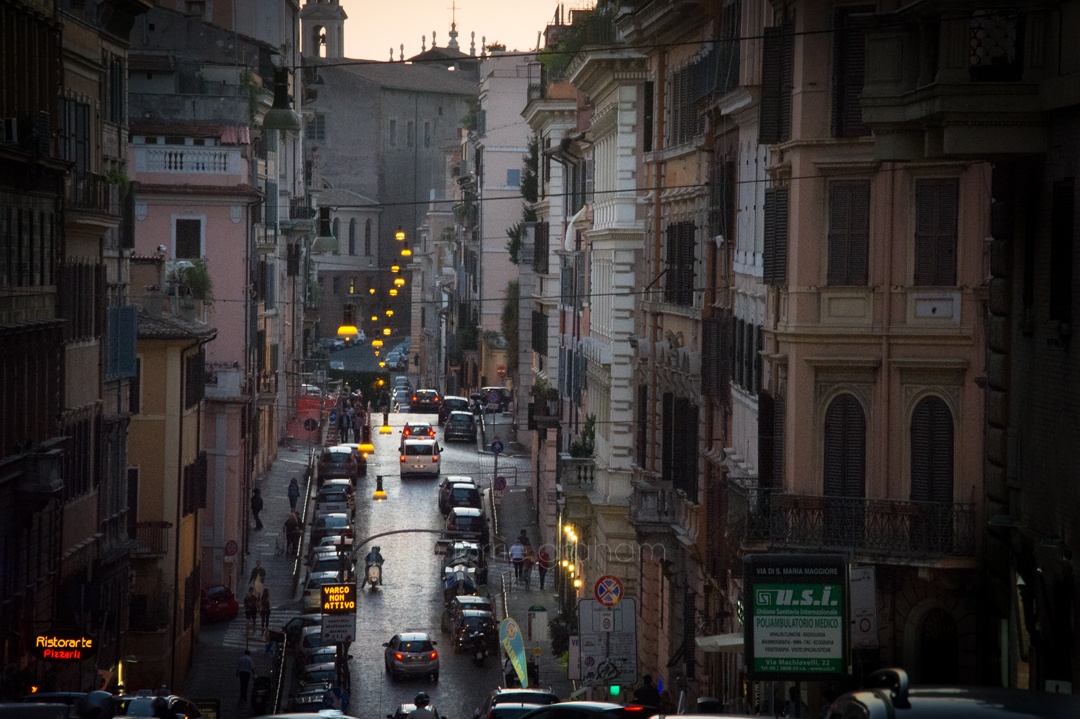