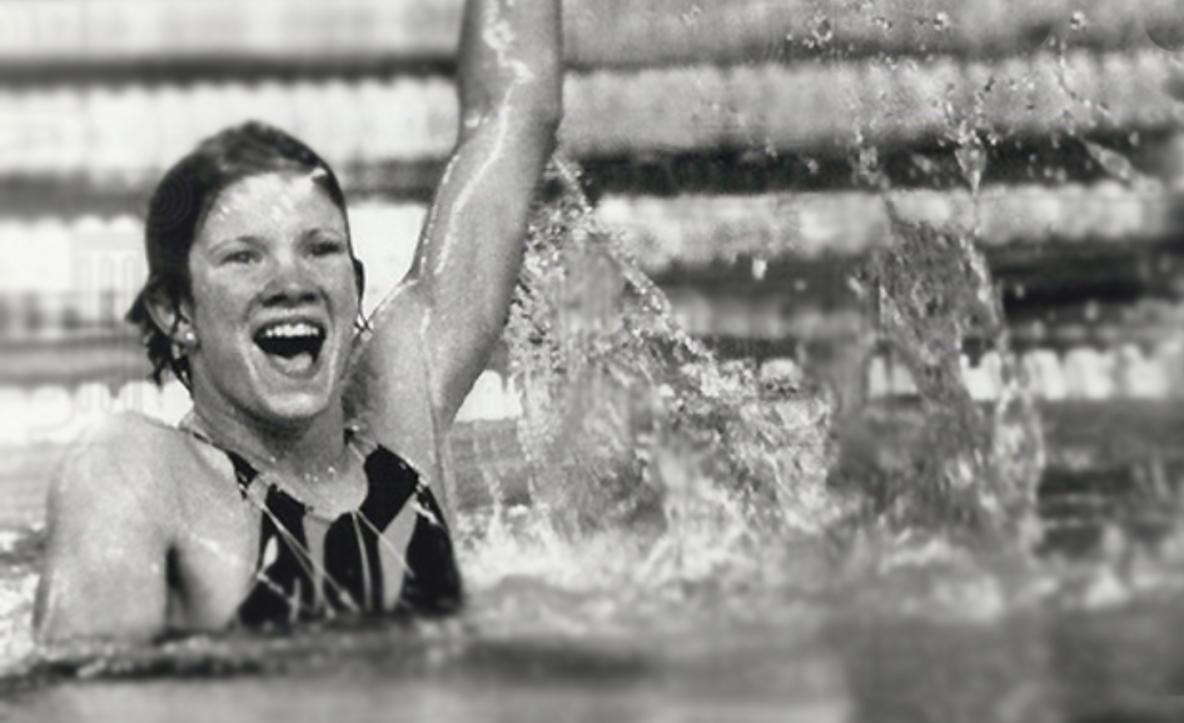 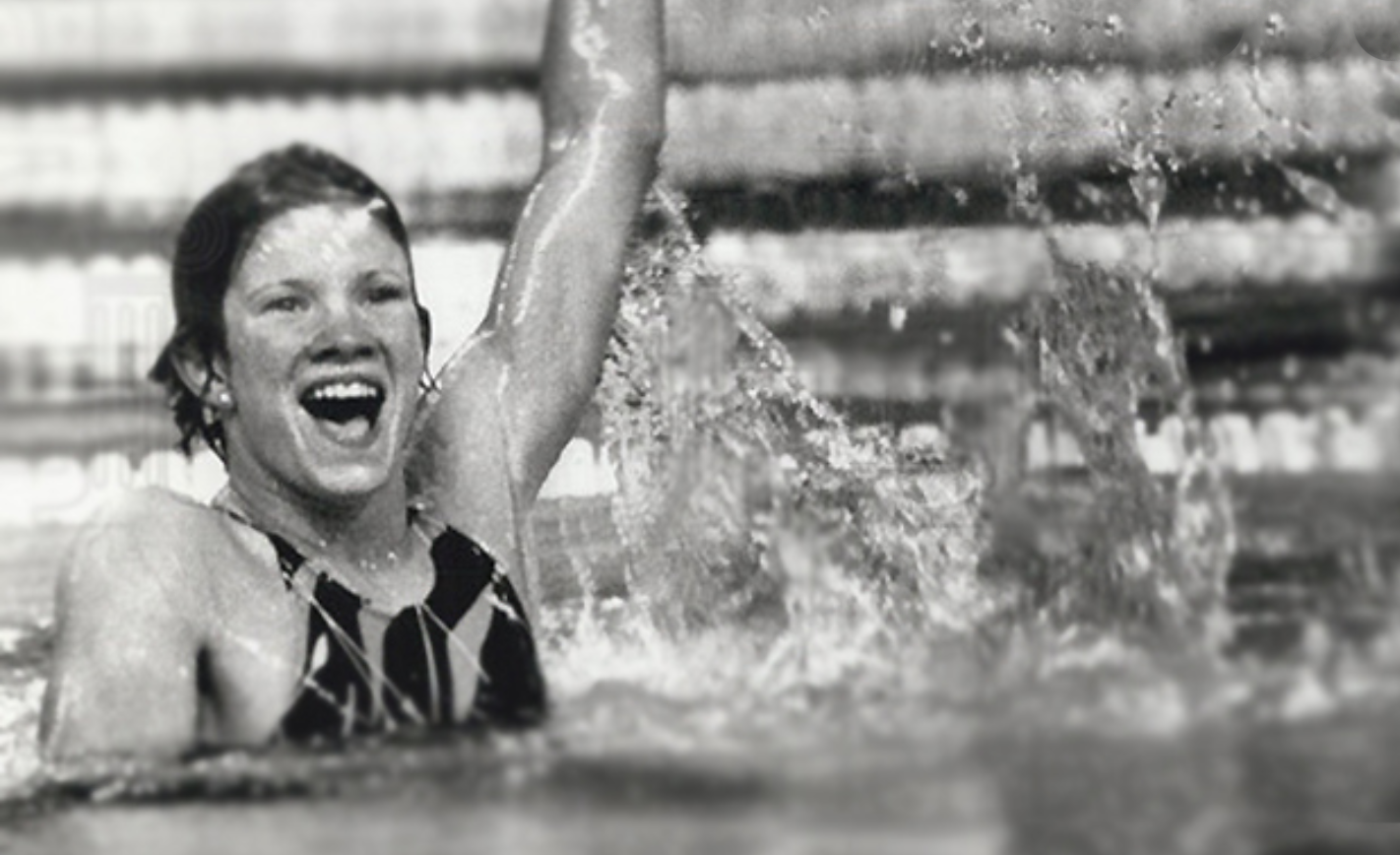 Michelle Ford won Olympic gold against doped-up competitors and carries that same strength of determination and resilience into the rest of her life. She discusses what makes a champion, the East German doping scandal, and what's next for her.

Life is filled with transitions. So often our happiness depends on our ability to navigate the unknown waters we may have found ourselves plunged into. To be an Olympian, a Gold Medal winner, means to be the very best in the world at your sport. It means to be the recipient of global attentionand accolades and usually at a very young age. But then what? How does one move on from being absolutely extraordinary at one thing, to being less than that at something new? Having focused one’s life on the singular dream of achieving greatness, where does one go after that?

These are the questions we wanted to understand better from someone who knows all about transitions. Australian Michelle Ford was the only non-Soviet Bloc female swimmer to win an individual gold medal at the 1980 games. She also set two world records in her career and was the first Australian woman to win individual Olympic medals in two distinct specialized strokes.

It was an Olympiad fraught with controversy. Michelle was under pressure from the Australian government not to participate in the games because of the boycott, despite swimming at world-class level. Then at the games, up against heavily doped East Bloc swimmers, she, like the champion she is, found a way to win. Post her competitive athletic life, she brought the focus she learned from being an elite athlete and, along with it, a healthy dose of humility.

How are people like yourself different from others?
We are all humans. But I guess the competition, the successes, and the failures tend to shape our personalities. It takes strength, grit, and determination to compete at the highest levels. I’d say that we are more often intrinsically motivated and are driven by the challenges given to us. I was trained to focus, be strong and not give up. A good coach can see that in an athlete, and this is what they work on. In the ’70s and ’80s, there were no financial awards, which meant that our careers were short-lived. I am someone who continuously looked to improve — I would thrive on that feeling when it all came together in a perfect swim. We learn over time that winning is about commitment, dedication and a lot of hard work. At the end of the day, it really all comes down to how much you love what you do.

“I am not held back by conventional restraint; I know I can push barriers in a way that perhaps others don’t”

How does this sort of grit or reliance you describe come into play in your life today, now that you are not a competitive athlete?
I guess I am not held back by conventional restraint; I know I can push barriers in a way that perhaps others don’t. I am not invincible, but if I feel strongly about something, I’ll keep going at it. Like everyone, I still have challenges. There are many things I am not good at. For instance, I am trying to write a book, and this is challenging for me.

There are many Olympians, but only 3 will podium and 1 will win. What separates them? What is the ingredient?
It is about that one day, that moment, that particular instant when you are called upon to do something. At the Olympics, there are many more elements that come into play. It is bigger than any national championship in your home country, in that there is so much you are not in control of — the food, the location, the culture, a mix of different sports on at the same time, the venues, and the many distractions. How do you make yourself block out all the noise and bring out everything you have been trained to do? The Champion can do this, and that is what makes the difference.

“How do you make yourself block out all the noise and bring out everything you have been trained to do?”

At one point you were the very best in the world at one thing. How does it feel to be more mortal in areas outside of the one you took gold in?
I have been fortunate, but I guess we make our own fortune. My transition into life after sport has been good. However, this is not always the case and I know for many athletes it is very hard. It is like forced retirement that many people go through, except for an athlete it happens when they are so young. When we come off that podium, we feel we are the same person, but we are perceived differently in the world. Many athletes seek acclaim — we all miss that, but we need to reinvent ourselves. The question each athlete asks is how do we look at ourselves after such a career? One year after my gold medal swim when East German state doping program was in full form, I was fortunate to be one of the first athletes to be asked to voice our opinions at the 1981 Olympic congress. This was back when athletes were still considered armatures. A time where our place was on the field with no ability to influence the direction of the sporting world or the Olympic movement. Yet, albeit much scepticism, we stood up and asked for change. This gave me a pathway into what I do now, to talk to the issues in sports.

What do you say to people who want to pivot to doing another job? You, and the athletes you know, have a special insight into how to reframe yourselves.
The difference is that we are so young when we test those extremes. It gives you a harder skin. We (athletes) have to navigate the challenges and the constant failings. It’s part of sport, because every day the competition is different, and we learned to deal with failures and get back up and go again. Just like in the business world. The athlete we are one day is suddenly no longer, so we need to learn to adapt to the changes. It’s about finding another goal, another purpose, or another road to take. The problem champions can have is that they think it should be easy for them, as they have already made it. This is a learning curve we need to adjust to. People may expect you to perform in another field at that same elite level, but you may not have that skillset yet. This is something the person needs to come to terms with; expectations are high. There needs to be some humility here, along with resilience.

“There needs to be some humility here, along with resilience”

One thing to keep in mind is that it is not just you in sport, there is an entire team behind you: your coach, your family, your friends who pull you through the hard times. That is why when I am mentoring people, I tell them to find somebody who will help draw them up the chain. Find that mentor who has that confidence in you, like your coach did, and don’t let them go.

What is the most memorable thing about going to the Olympics as a competitor?
It is a lot about the dream, and actually being there, standing on that starting block and realizing that you are there with the best in the world.

The Olympics are so special because it takes place once every 4 years, which is long for an athlete. There is so much sacrifice that is needed in those 4 years. While getting there is enough of an achievement for some athletes, winning is another step. It’s about handling the weight that is placed on you which becomes a totally different dynamic at the Olympic Games. You feel so special and full of national pride. To think that you are there amongst the best in the world representing your country and all those who helped you get there.

“I have been working on my memoirs”

What are you working on now?
I have been working on my memoirs. I am hoping for this to be a broader story that sheds the light on the challenges – physical, psychological, and political – that athletes come to face, while also shedding some light on what it was to compete in those days. The 1980 Moscow Games were fraught with controversy over the boycott and the East Bloc doping that nearly brought the Olympic movement to an end. I felt it was time to tell this story from an athlete’s perspective. There were also the humiliations we female athletes had to overcome, as there was no gender parity back then. I guess it is about the saying, when you’ve had everything on your back then you get thrown the kitchen sink, now what?

At the time, the East Germans pretended there was nothing going on. I was the only non-Eastern Bloc female who defeated them, which still amazes me. They had beaten me in the first two races, where I won bronze and fourth place behind them, and then, for the final race, the 800m freestyle, I said no way they are doing this to me again. I told myself I had to swim my race not theirs, so I pulled myself into focus and won — mind over matter. My understanding is they were quite surprised I won.

Additional to your writing, what else have you been working on?
For over 10 years, I was a director of sport at University of Lausanne, Switzerland, before moving back to Australia to work with the organizing committee of the Sydney 2000 Games. My knowledge of local and international sport, I was asked to the board of the Australian government’s ‘Sports Commission’ as well as a board member of Australian swimming. I also really enjoy coaching and mentoring athletes, in particular the transition of past athletes.

Were you able to ever meet any of the East Germans after the games?
No, I haven’t as yet. I have heard that many don’t want to talk about the Games. Sadly, the winner and world record holder of 200 fly in ’76 recently passed away. And so, I would like to ask them: “How do you feel about this, all the doping, and what it has done to them?”

Evidence from the Stasi files show how much they were doping, the amounts they were being given. When I read them I was shocked as they were being given 3 times the level of Ben Johnson (the Canadian sprinter banned for doping). For women, who were smaller and more affected by steroids, these were huge doses. Many in the swimming community have asked but, to date, the records have never been set straight. I think this is something that needs to be answered; we must show that doping is wrong.

They were not really given a choice, right? They were made to take these drugs; they were science experiments. So they were victims also, don’t you think?
We were all political pawns in that era. It was terrible, and the scars still exist — for the Americans and other nations who were denied their right to compete because of the boycotts, and for the East Germans who suffered the physical effects from doping. I get that the doping issue is a difficult and delicate question, but I also think that for the good of sport, if there has been cheating it needs to be addressed. For the moms and dads who bring their kids to sports, and for the athletes who compete at the highest level, we need to do this for them.