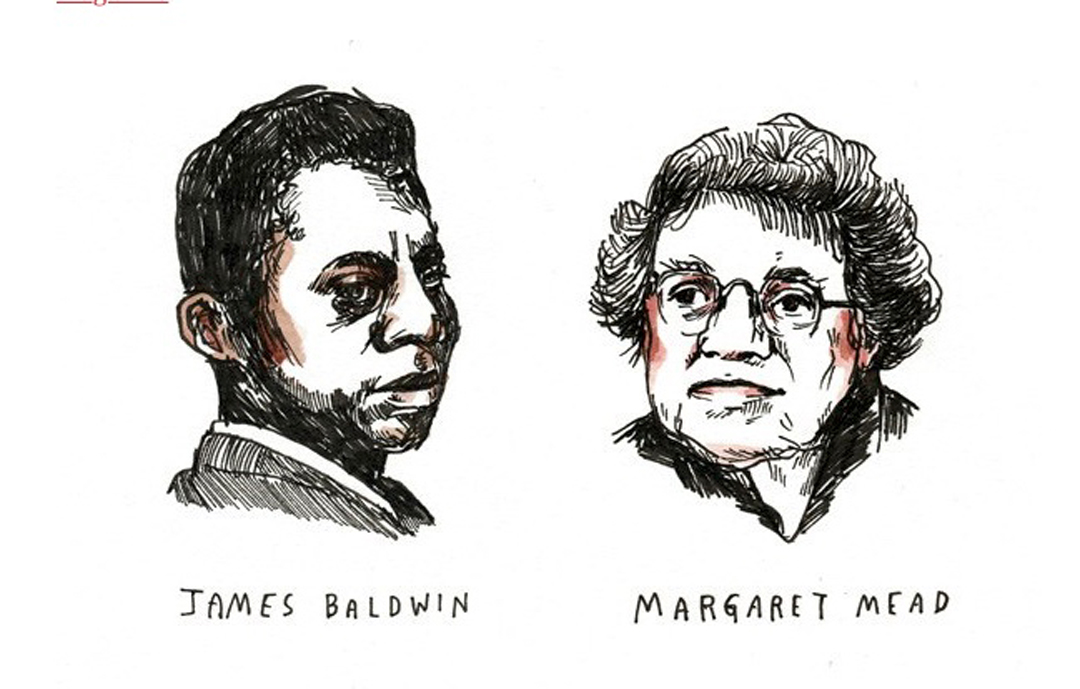 James Baldwin and Margaret Mead's rap on race is extraordinary, if you have the time, hit the link to read on the wonderful site Brain Pickings

NOTE: I wrote this essay five years ago, about a conversation that took place fifty years ago – both important timestamps in reflecting on how the ideas therein speak perfectly to the present moment, and how they speak imperfectly but importantly as historical counterweights in a continually evolving context. This essay was the first installment in a multi-part series covering Mead and Baldwin’s historic conversation. Part 2 focuses on identity, race, and the immigrant experience; part 3 on changing one’s destiny; part 4 on reimagining democracy for a post-consumerist culture.

On the evening of August 25, 1970, Margaret Mead (December 16, 1901–November 15, 1978) and James Baldwin (August 2, 1924–December 1, 1987) sat together on a stage in New York City for a remarkable public conversation about such enduring concerns as identity, power and privilege, race and gender, beauty, religion, justice, and the relationship between the intellect and the imagination. By that point, Baldwin, forty-six and living in Paris, was arguably the world’s most famous living poet, and an enormously influential voice in the civil rights dialogue; Mead, who was about to turn seventy, had become the world’s first celebrity academic — a visionary anthropologist with groundbreaking field experience under her belt, who lectured at some of the best cultural institutions and had a popular advice column in Redbook magazine.

They talked for seven and a half hours of brilliance and bravery over the course of the weekend, bringing to the dialogue the perfect balance of similarity and difference to make it immensely simulating and deeply respectful. On the one hand, as a white woman and black man in the first half of the twentieth century, they had come of age through experiences worlds apart. On the other, they had worlds in common as intellectual titans, avid antidotes to the era’s cultural stereotypes, queer people half a century before marriage equality, and unflinching celebrators of the human spirit. Besides being a remarkable and prescient piece of the cultural record, their conversation, the transcript of which was eventually published as A Rap on Race (public library), is also a bittersweet testament to one of the recurring themes in their dialogue — our tendency to sideline the past as impertinent to the present, only to rediscover how central it is in understanding the driving forces of our world and harnessing them toward a better future.

This forgotten treasure, which I dusted off shortly after Ferguson and the Eric Garner tragedy, instantly stopped my breath with its extraordinary timeliness — the ideas with which these two remarkable minds tussled in 1970 had emerged, unsolved and unresolved, to haunt and taunt us four decades later with urgency that can no longer be evaded or denied. Although some of what is said is so succinctly brilliant that it encapsulates the essence of the issue — at one point, Baldwin remarks: “We’ve got to be as clear-headed about human beings as possible, because we are still each other’s only hope.” — this is nonetheless a conversation so complex, so dimensional, so wide-ranging, that to synthesize it in a single article or highlight a single dominant theme would be to instantly flatten it and strip it of power.

Instead, I am going to do something I’ve never done in nearly a decade of Brain Pickings — explore this immensely valuable cultural artifact in a multi-part series examining a specific viewpoint from this zoetrope of genius in each installment, beginning with Mead and Baldwin’s tapestry of perspectives on forgiveness, the difference between guilt and responsibility, and the role of the past in understanding the present and building a more dignified future.