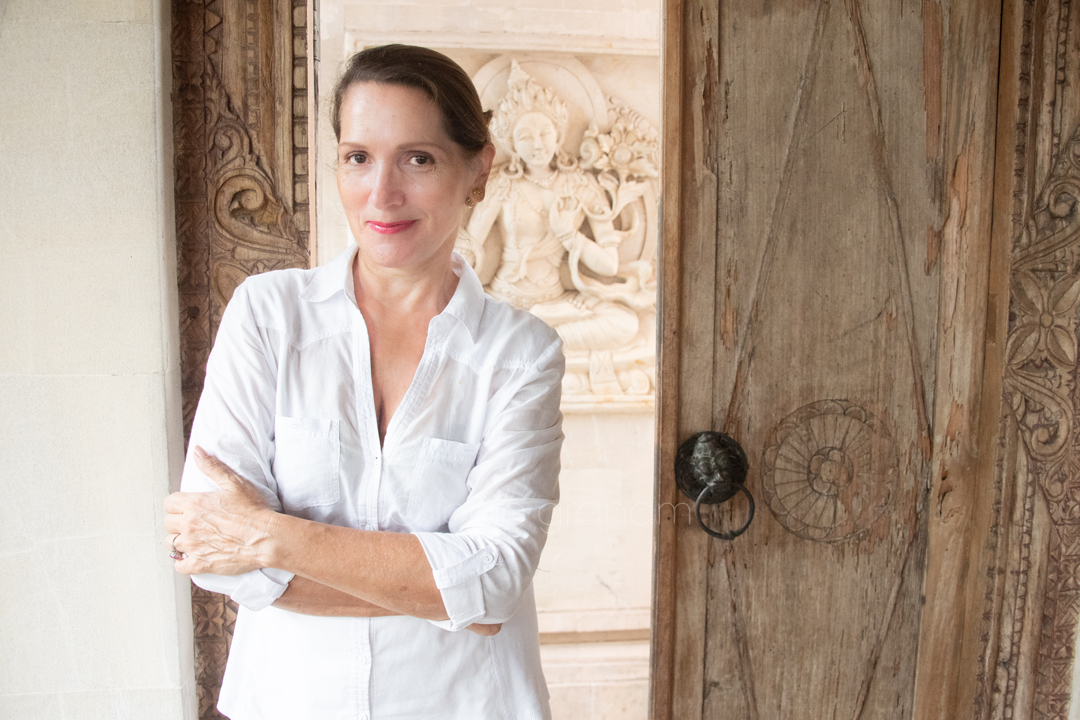 Janet De Neefe is a force. She has several restaurants - Indus is a particular favourite of ours - and a guesthouse a cooking school. She started and runs the Ubud Writers festival and this year launched the Ubud Food Festival. She also takes intimate cruises through the Spice Islands.

She’s devoted the last 30 years to sweeping visitors off their feet with her adopted Balinese hometown.

Now, Janet DeNeefe reflects on how she, as a western woman has managed to thrive in her adopted culture and home of Ubud.

LG: Janet you have been here over thirty years, so can you tell me what it has been like as a Western Woman.

JDN: It hasn’t been difficult. I’m very lucky that my husband is very well respected in the community but also is an entrepreneur himself. He has been a part of whatever I’ve done anyway so it hasn’t been a solo journey. I couldn’t have done it without him. I wouldn’t have come into this culture without some sort of support team around me. So I’ve had a mentor who has guided me.

LG: Culturally how are women treated in Bali?

JDN : Pretty good from my perspective, from where I sit it has always been good and I look at my sisters-in-law and they are all driving their own businesses. One of them is working in a bank, and I know she had some issues, she said her husband didn’t want her to work in a bank but she’s still there and a few months ago she said her husband didn’t want her to travel for her job – she kept getting these bonuses to travel overseas – but she still doing it, so I know who wears the pants in that relationship. The women I hang out with and the family members they are all driving the businesses …… so, I’m not saying that’s the same for everybody but you would say about Australia also. 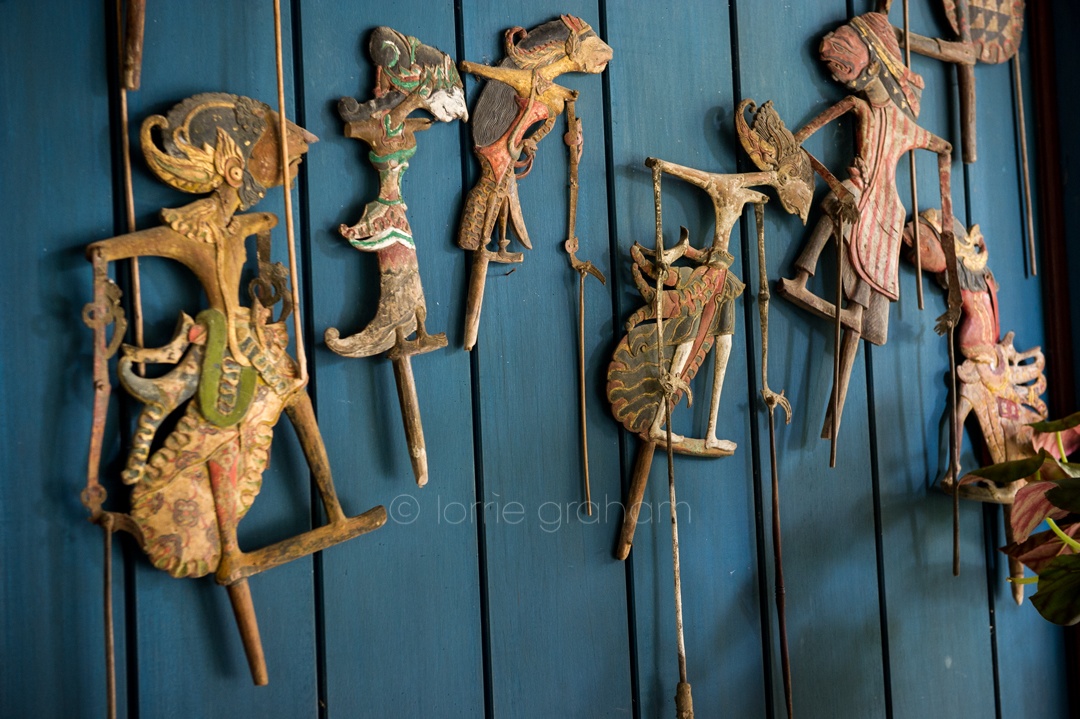 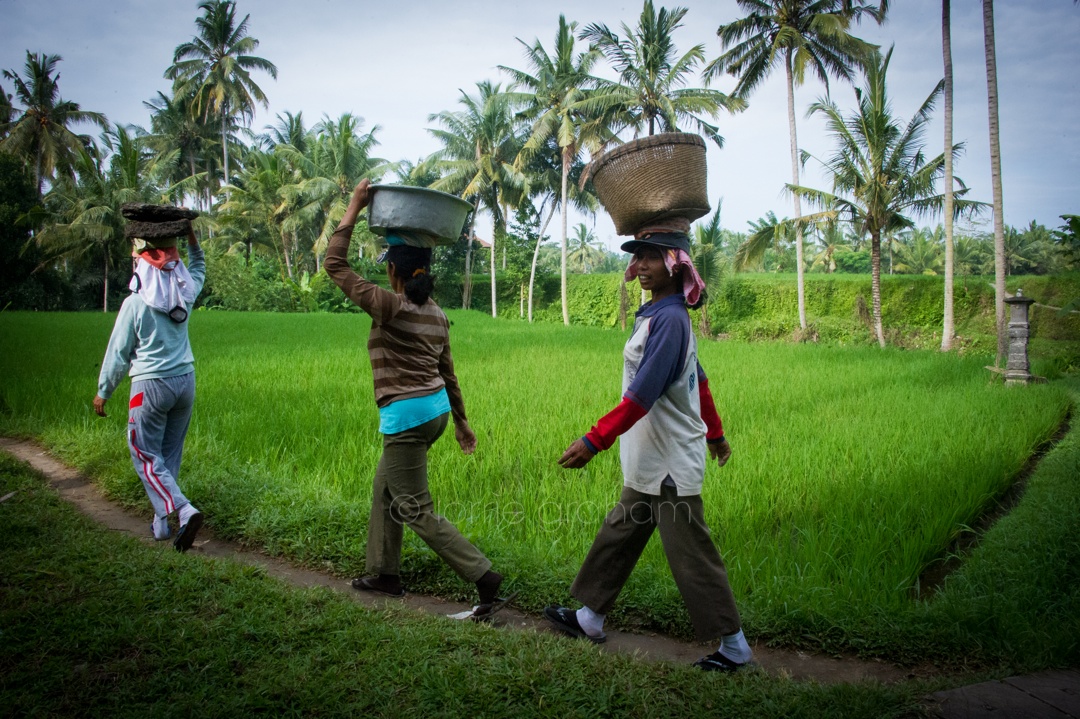 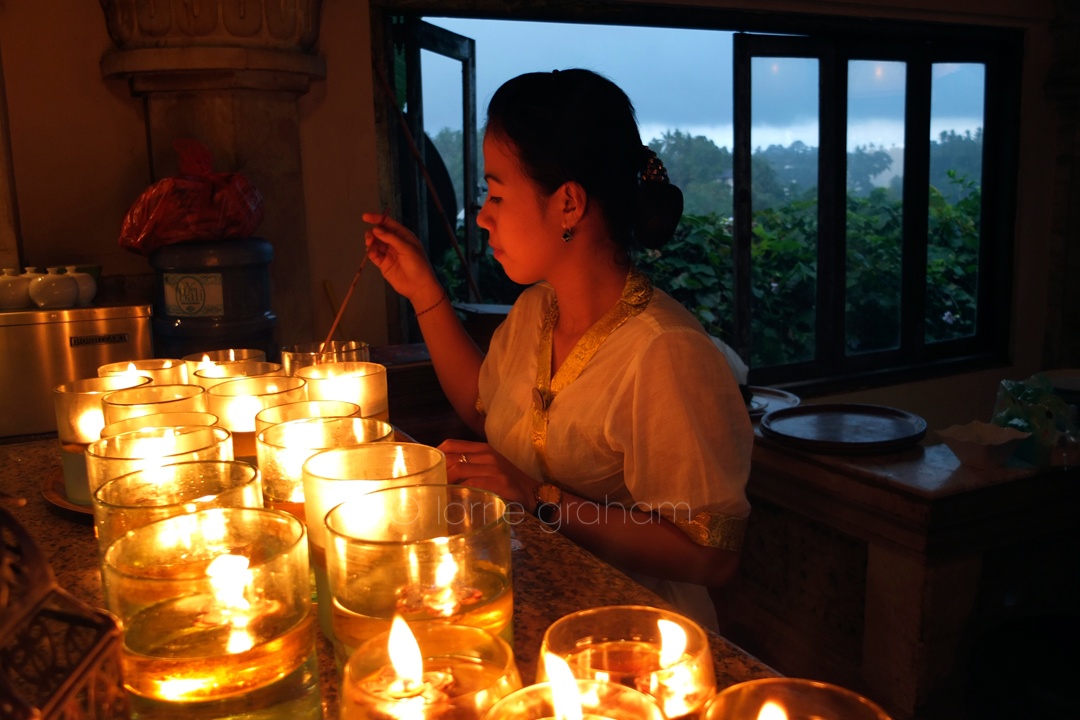 LG: How is ageing, as a woman, treated in this society?

JDN: I think most of the Balinese women my age are at home looking after their grandchildren. I don’t have any grandchildren yet, I would love them. I think the fact that I’m still in all of my businesses, they think that’s pretty fantastic. They respect older people more, in general, here. What I find in Bali is that everyone is naturally old, when I go to Australia with all the facial alterations I find that kind of scary. I hang out with women here who are all growing old gracefully, not expecting to look any different.

LG: There’s a freedom in that?

JDN: Yes I think so, an honesty and authenticity that you are getting older and there’s nothing wrong with that, just enjoy it! What’s interesting here is that you always have a role. You know at my age, your role is to be a grandmother also to be looking after the house and of course there are a lot of ceremonies. It kind of nice because you get to hang out with your friends all the time. You know its like playing Bridge but instead you’re making offerings.

LG: Do you ever wonder what sort of life you’d have had if you hadn’t come to Bali?

JDN: I don’t think about that for long because I know it would be miserable. If I’d stayed in Melbourne I would have been teaching and there’s no way I would have lasted in that system. I wouldn’t have been able to have a restaurant the way I have here - that wouldn’t have been possible and I didn’t want to study to be a chef because that’s hard work….I could break my nails. …. (Laughs) …. I think about that for 2 seconds and I think just don’t go there . 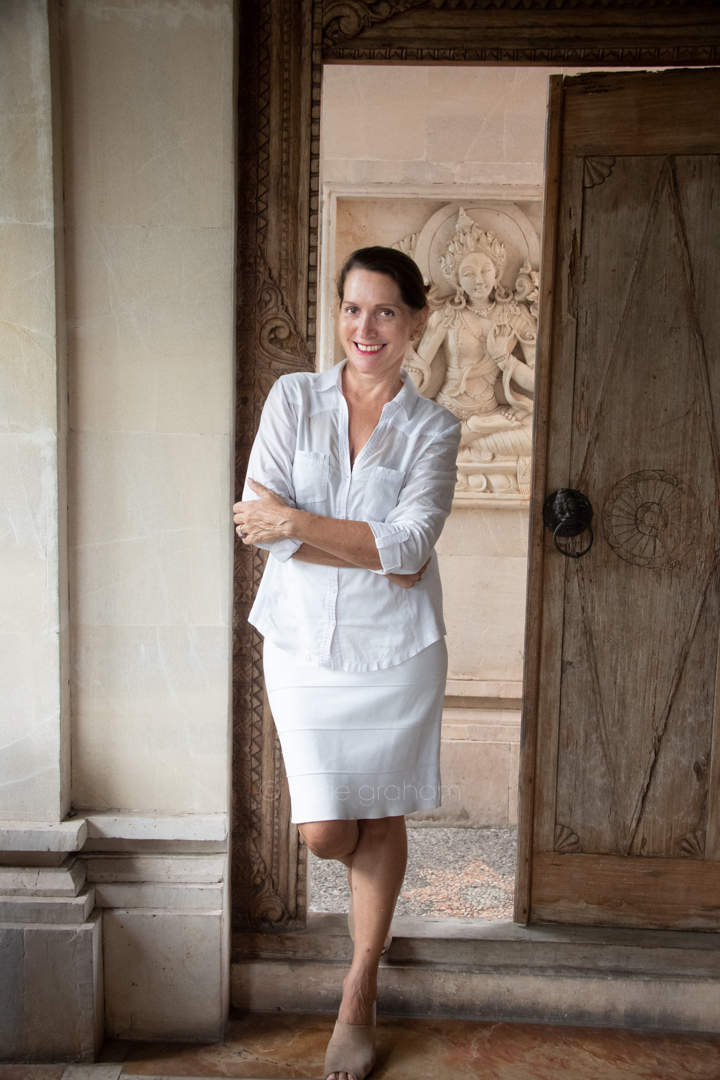 LG: It is a rich life living in a Culture that is not your own.

LG: Has the Writers Festival done what you wanted it to do by bringing the Community together?

JDN: Yes absolutely, absolutely. To be honest I had thought by now I would have had stronger sponsorship and partners and all sorts of people wanting to be connected but that hasn’t worked out the way I thought it would, but in terms of an event that has been highly successful and it brings Ubud to life and brings an economic boost to Ubud during those days.

LG: Maybe that’s because publishing is in a bit of a hole worldwide?

JDN: Maybe that’s right, but in a way its been a plus for us ….. we don’t rely on publishers …. we can pick and choose, it means we have to pay for them but then no controls - our decision making our selection of authors.

LG: Which is wonderful because you get to see other Asian writers that one wouldn’t normally get to see.

JDN: Yes, but you also get to see other authors who never make it to Australia. You realise how limited the publishing world is. One of the most common comments we get is …. people love it for the surprise factor they say they come to the festival to hear the voices of authors they would never have known about. Whether that’s Indonesian or other and that’s what excites me too.

LG: The Food Festival - tell me about that. We have noticed on this trip that the food is spectacular.

JDN: Yes I’ve been wanting to do a Food Festival for years, but I had to wait for my team to get up to speed, and then a couple of years ago I dropped the bomb and said OK guys we are going to do this, and who doesn’t love a food festival? Its going to be fantastic. It is not just about Indonesian food but the ingredients we have here and also about the Chefs either those born here or who have come to work here. I believe one of Bali’s great selling points is its food, because even if its not 100% organic its almost there, because you know it wasn’t long ago when the whole island was organic. When you have a curry here its fresh spices, at Casa Luna we still grind by hand …. where else do you get that? I think there is an integrity and authenticity of flavour here.

LG: So I didn’t realise you could see Mt Agugn from the terrace of Indus.

JDN : We’ve always been dominated by the Volcano …. everyone in awe of it, instead of being angry with it, we’re all just Arrrh bowing to this awesome power. We keep hearing the Volcano will erupt …. but it doesn’t erupt but what we get is the media erupting and that had the most devastating effect on us …. it didn’t erupt but the humanoids did. 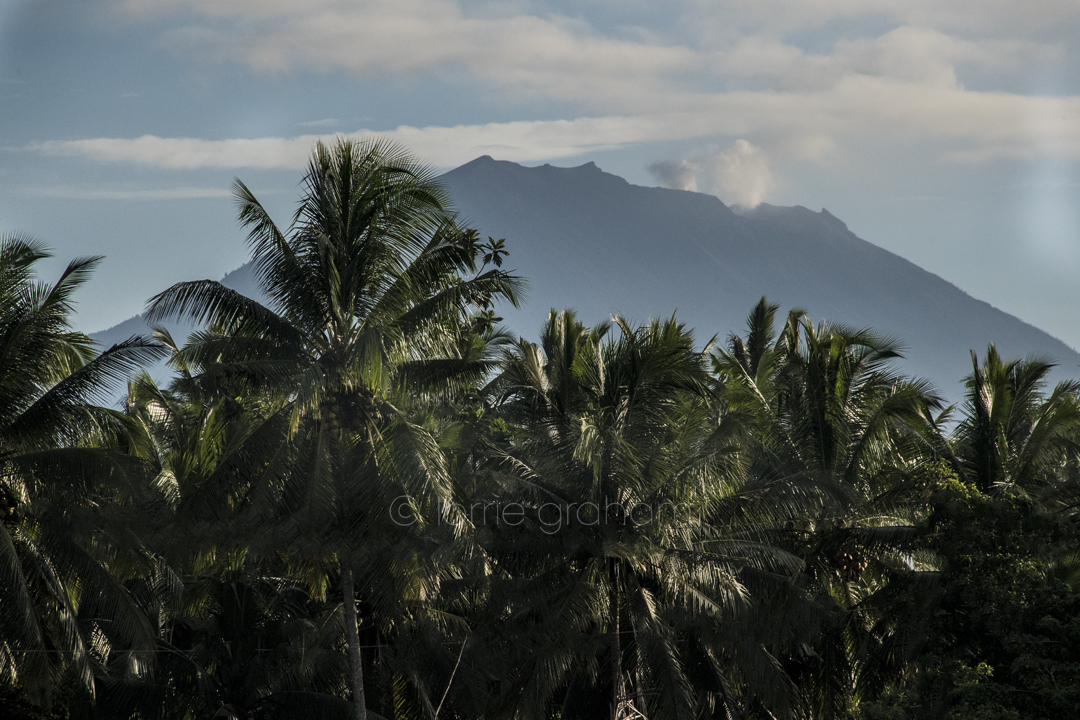 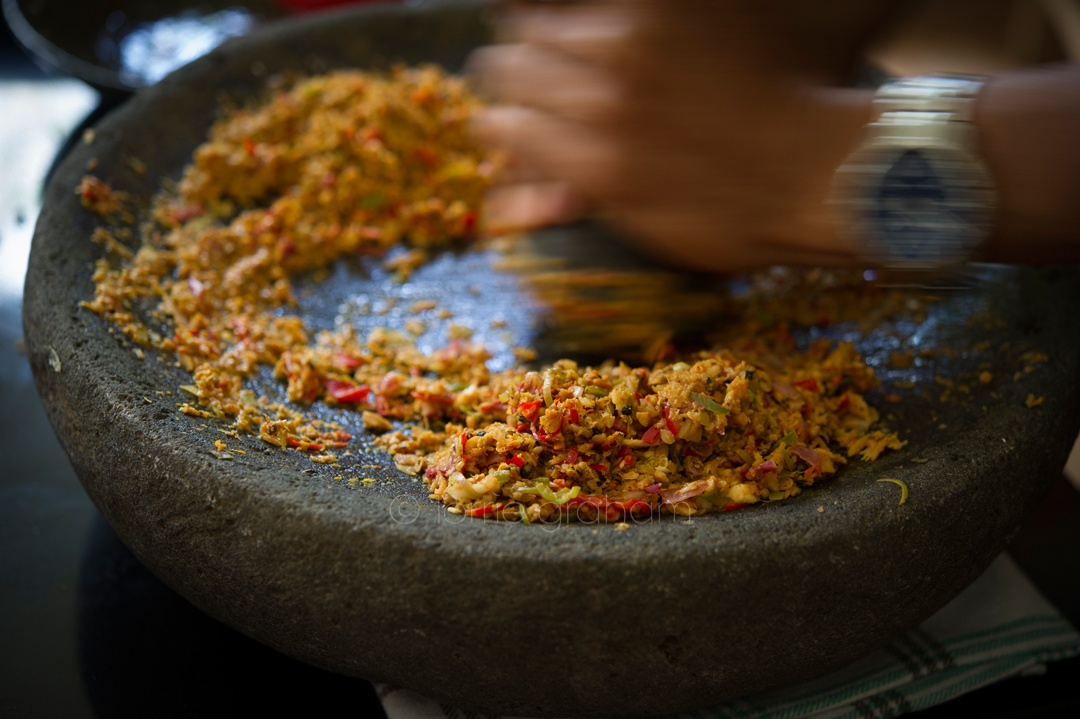 LG: The Spice Island cruises what about them ?

JDN: I think I might even do two cruises next year, I’m besotted with that part of Indonesia ….. there is something about the Spice Islands, you know you get on a boat and its like an old pirate ship its - like a historic voyage because when you sail across the ocean you are taking the same path that these adventurers, pioneers, pirates, the Dutch the British, they all went the same way.

So I think this time …. I’ll give homework, and ask the travellers to read Nathaniel’s “Nutmeg” so you become familiar and understand this part of the world and how significant it was in terms of global trade, so everyone has the sense that we are like the pirates and we were taking that journey through the fabled spice islands. I mean this was the only place on the planet that had nutmeg, cloves and mace - the only islands in the world ! So because of that, Indonesia fell to 350 years of Colonial rule.

We take this journey, and on the way we stop off at these little islands and get a sense of island life. The people live very simply and then we sail into Banda Nirea and both times on the cruise …. people have just gone very quiet as we’ve entered this very small port where the Dutch based themselves for hundreds of years, so there’s this silence that takes over all over us, its very beautiful.

There is this small but sprawling old hotel and then we head off to the island of Run, that is said to be the only place that had the Nutmeg at the time. The story of that island Run is that, it was a neck and neck fight between the Dutch and the British to get the spice islands and this little island of Run - the British held it for 4 years - so they laid claim to it and the Dutch took over but the British felt they still owned it but eventually they sat down and decided to swop so the British said to the Dutch you can have the island of Run and we have this other island called New Amsterdam that you can have that - so the British got Manhatten and the Dutch got this little island. That is such a tiny spec on the map. So going on the trip there has a great sense of history. We also went and visited the house where Nathaniel wrote the book.

LG: How long is Trip?

JDN: I think it was 8 nights and 9 days. Have you seen the video? The girls, on the island, taught me how make these fish cakes that taste like falafel. Originally, in this region and because they had the nutmeg you had the Arabic and Chinese traders coming to that part of Indonesia so the food in Banda Nirea is wonderful, these little fish cakes have a lot of cumin and mint so no one cooks food like that in Indonesia, I was really lucky to learn that and I have these very treasured recipes that are so yummy. Because Europeans called Nutmeg Muscat - I’ve always known that the reason they called it that, for the Arab and Chinese traders, it was just pure trade but with the British and Dutch that’s when money was involved …. got involved …. and it changed it forever. But the Arab traders would take the Nutmeg to Muscat.

LG: Its not an easy place to get to?

JDN: I know, which is what is kind of wonderful about it, that why its so quiet. We go island hopping …. there are some beautiful islands. So if we do the fast boat from Ambon to Banda Nirea you miss out on these beautiful islands but either way its very special. 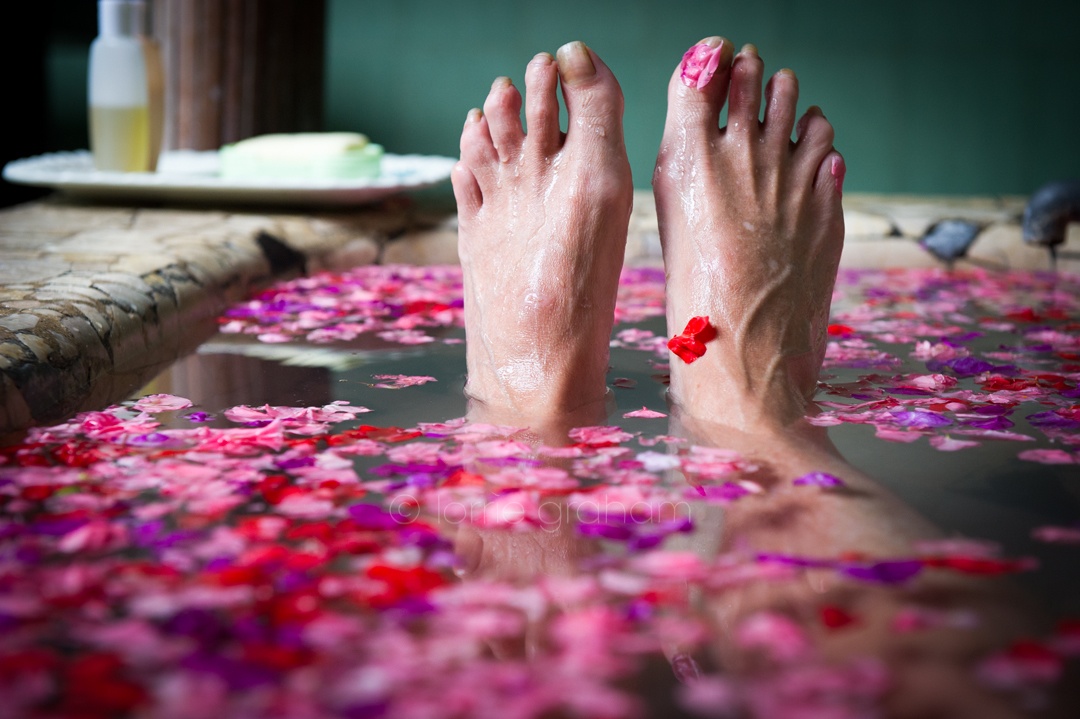 LG: So about your favourite drink (according to the Indus Restaurant Menu) is the one with Tumeric.

JDN: Oh yes I should drink that everyday its good for you brain its probably the worlds most effective anti inflammatory, it has had good results in dealing with 5 different types of Cancers, so if you drink that everyday you will avoid a ton of very bad illnesses. My other drink is Papaya with lime juice its vitamin A its good for the stomach because of the enzymes

LG: Do you have Boreh

JDN: Not so much. One of my favourite things is to rub coconut oil all over my skin. Your skin just drinks it in. My other addiction is Rose Hip oil I put it on my face every night.

LG: Do you travel a lot

JDN: My daughter has been in Florence studying fashion for the past 12 months so I visited her a few times and I went back to see her for 3 weeks and since that first trip she had worked out where to eat best pizza great food that has been amazing. 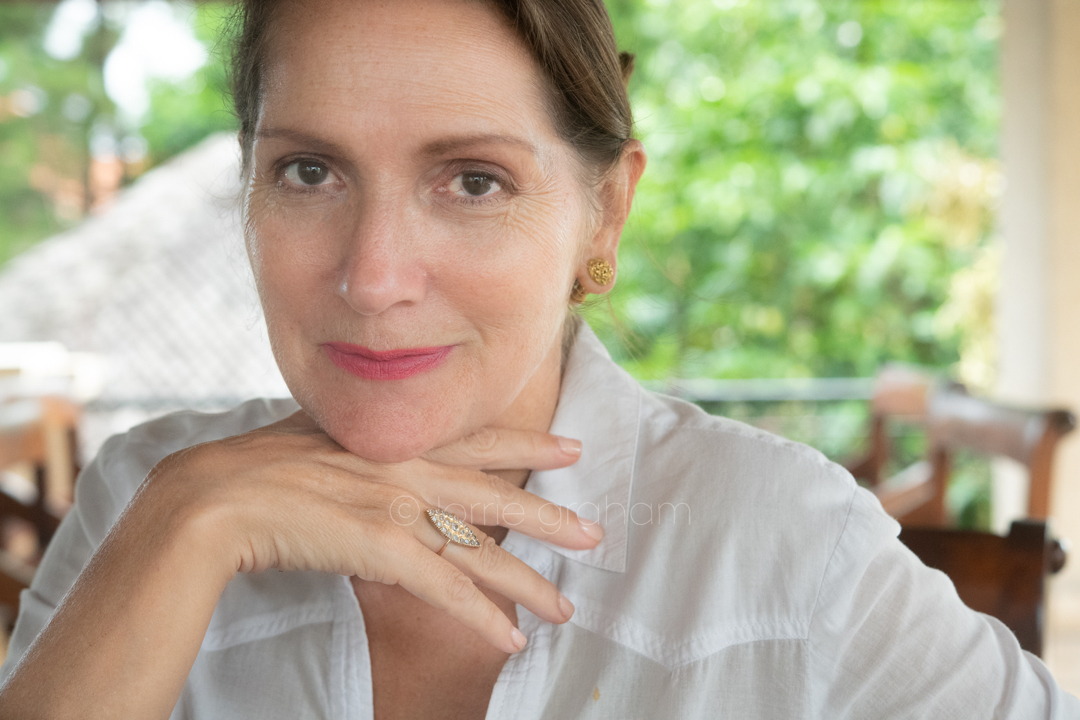