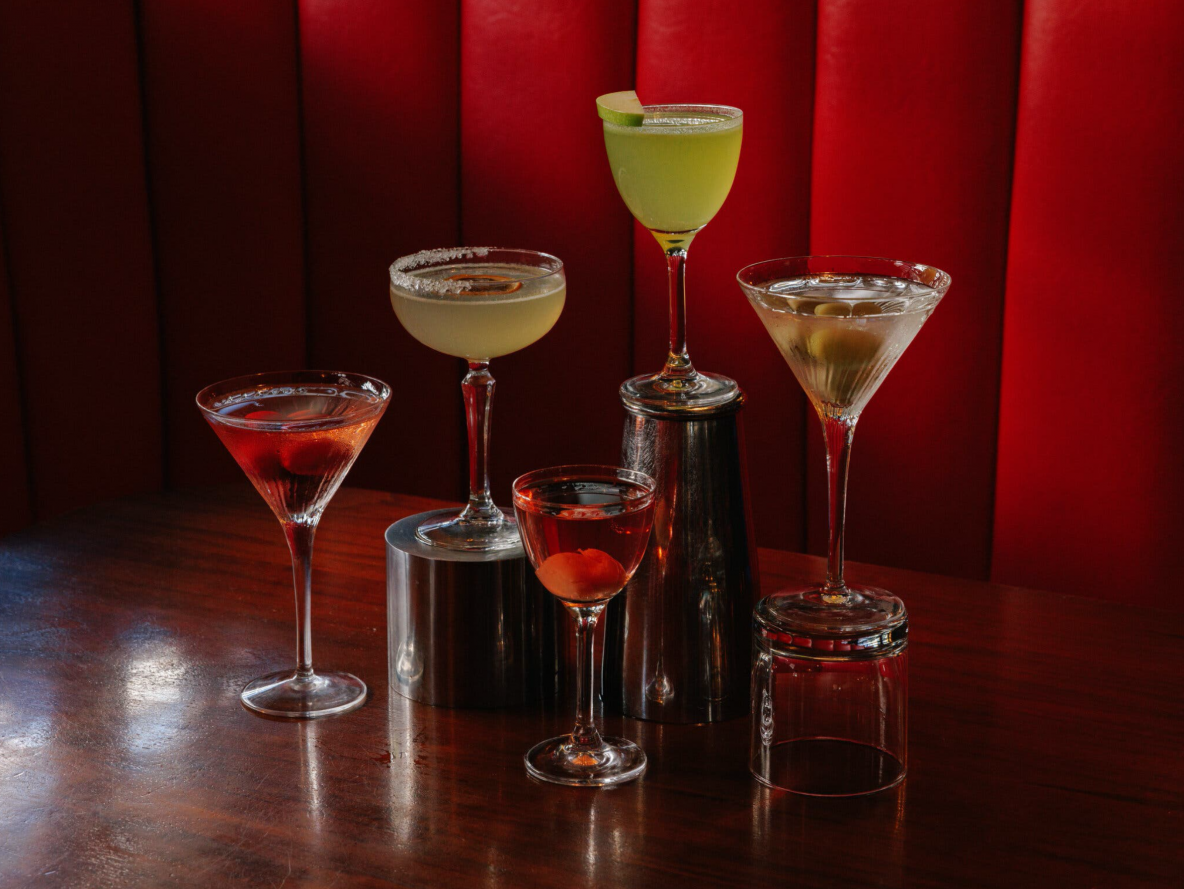 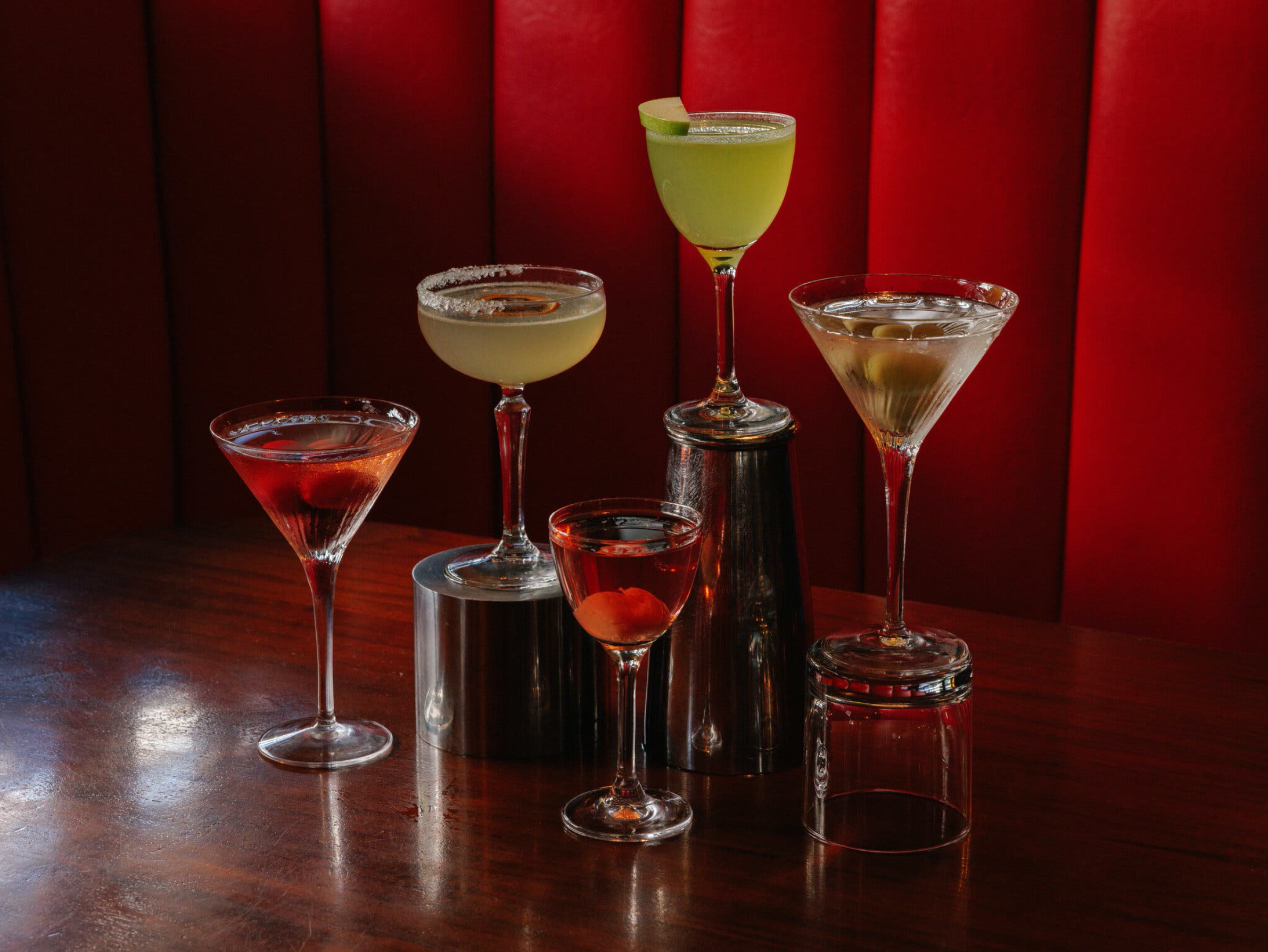 The Second Coming of the Appletini

As nostalgia grips drinkers, bartenders are giving vilified ’90s concoctions like the lychee martini and the lemon drop an upgrade — and ushering in a new martini era.

In April, a bar called Martiny’s — pronounced like the drink — opened near Gramercy Park in Manhattan. As one might expect from a place named after the world’s most famous cocktail, there is a martini on the menu. It is purple.

That signature cocktail — the Grand Martiny’s — is made of gin, manzanilla sherry, port wine, elderflower liqueur and Cognac. It’s a twist on a 50-50 martini from Takuma Watanabe, the cocktail bar’s beverage director and a founder. “I love martinis,” he said.

He has company. These days, New York and other major cities are awash in martinis, many of them straying far from the traditional template. Speculation within the industry on the source of the drink’s ascent varies: There’s the nostalgia for a simpler era, the sharpening of drinkers’ palates thanks to Covid-era home bartending and, of course, the need for a stiff drink in hard times. The popularity of the espresso martini, too, cannot be discounted, if only for keeping the word martini in constant circulation.

Every new bar or restaurant seems to offer a special martini. And just as in the so-called ’tini era of the 1990s — when anything in a conical glass sported the name martini, no matter the ingredients — many don’t stop at one. 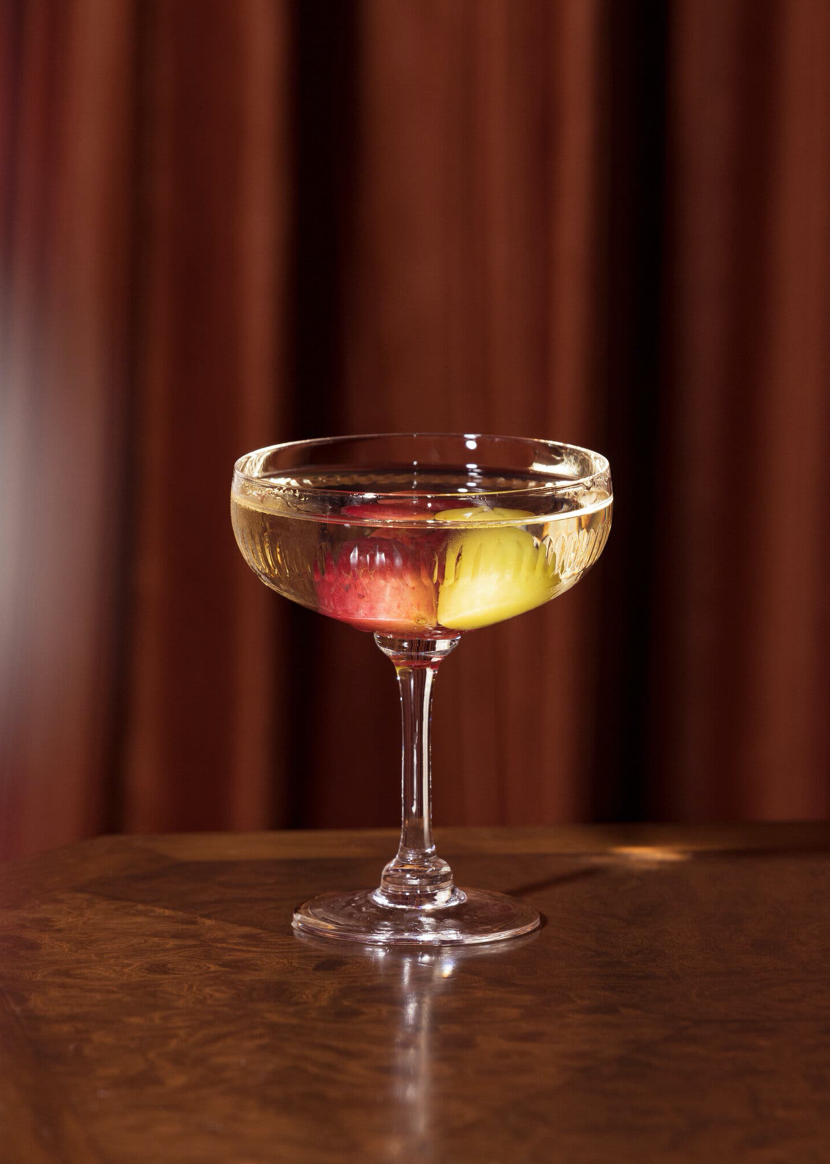 The martinis at Chezchez, an airy aperitivo-style bar that opened last fall in San Francisco, include the Coastal Martini, made of aquavit, sherry and vermouth. At Sweet Liberty in Miami, the martini list is six drinks long, with modern versions of ’90s staples like the lychee martini and the lemon drop.

Oui Cocktail Lounge, a new bar in Flatbush, Brooklyn, also has a lemon drop riff, made with vodka, sherry and lemon cordial. Little Ned, which recently opened in the old NoMad space in the Flatiron district, has a vodka-based Champagne martini made with Lillet Blanc and a Champagne reduction, and an Everything Martini, a gin-vodka blend flavored with a roasted-allium tincture and garnished with mozzarella balls.

It’s enough to make you take all the talk of a 1990s revival seriously. Are we living through a new ’tini era?

“I think it’s a much more refined ’tini era, if it is,” said Chris Moore, the beverage director of the Ned NoMad, the hotel and members’ club that contains Little Ned.

Mr. Moore, whose résumé includes stints at Coupette in London and Dante in Manhattan, is among the seasoned cocktail bartenders leading this explosion of variegated martinis. He recalls how the craft-cocktail community, which arose in the early 2000s, rejected the syrupy horrors of martinis past. Now, however, he is all in on martini experimentation.

“I quite like the idea of taking a classic twist on a martini and twisting it again,” he said. “Now I see the reinvention of the apple martini.” 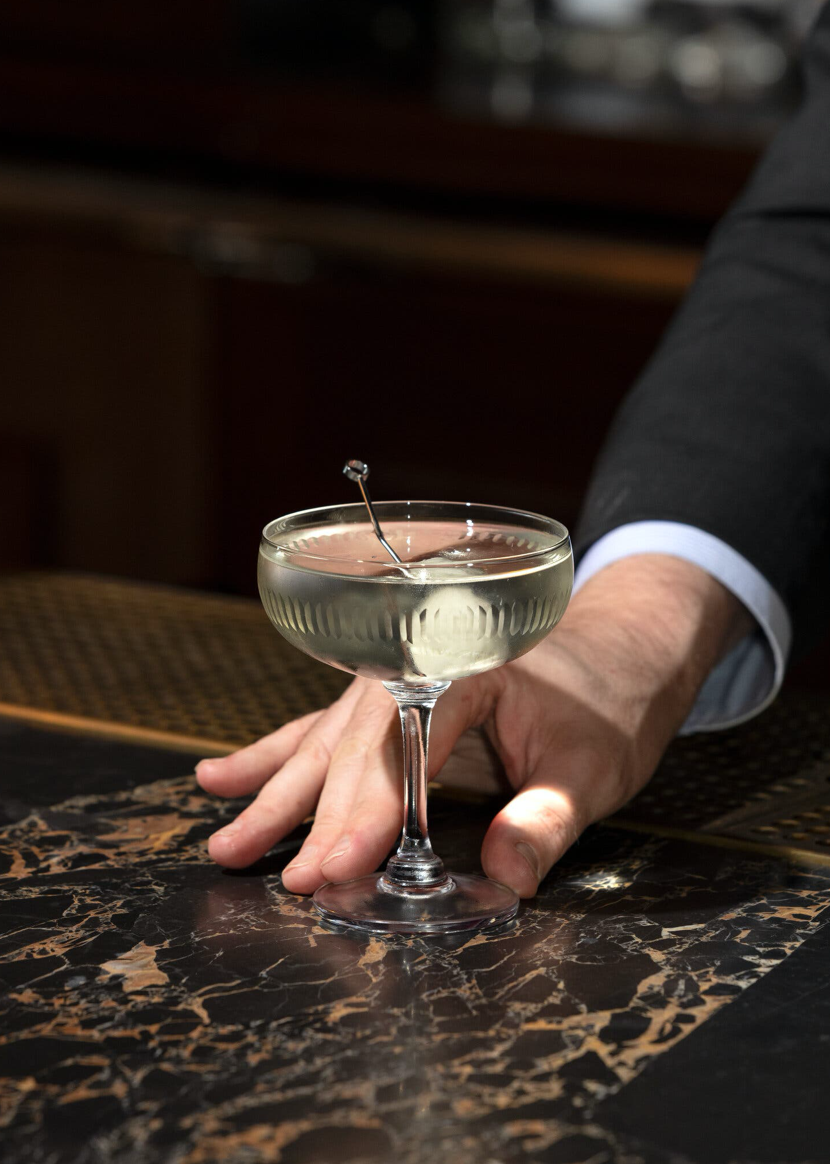 Julie Reiner, a leader in the craft-cocktail business for two decades, has tried to improve the appletini more than once. She first attracted attention in 2000 at the Greenwich Village restaurant C3 for her improved version of that ’90s bar staple, which used apple-infused vodka, apple liqueur and sparkling cider. When her new SoHo bar Milady’s opens this fall, she’ll serve apple martinis that are even better. Her latest version contains apple-infused gin and vodka, as well as apple brandy and apple liqueur.

She thinks the martini’s resurgence is driven in large part by nostalgia. “And there’s something to be said for those flavors,” she said. “A lot of people want to drink martinis, but a classic martini is too strong for them.”

The critical differences between yesterday’s and today’s creative martinis are skill and ingredients. While the old martinis were mostly made of vodka and cloying liqueurs, today’s bartenders insist on higher-quality spirits and a drier touch.

“It’s not just any random ingredient served in a martini glass,” said Sam Ross, an owner of Attaboy, who last year helped reopen Temple Bar in NoHo, which offers nearly a dozen martinis. “This time around, it’s based around clear spirits stirred with wine-based products,” he said, in the same way that the classic martini mixes clear gin or vodka with vermouth. 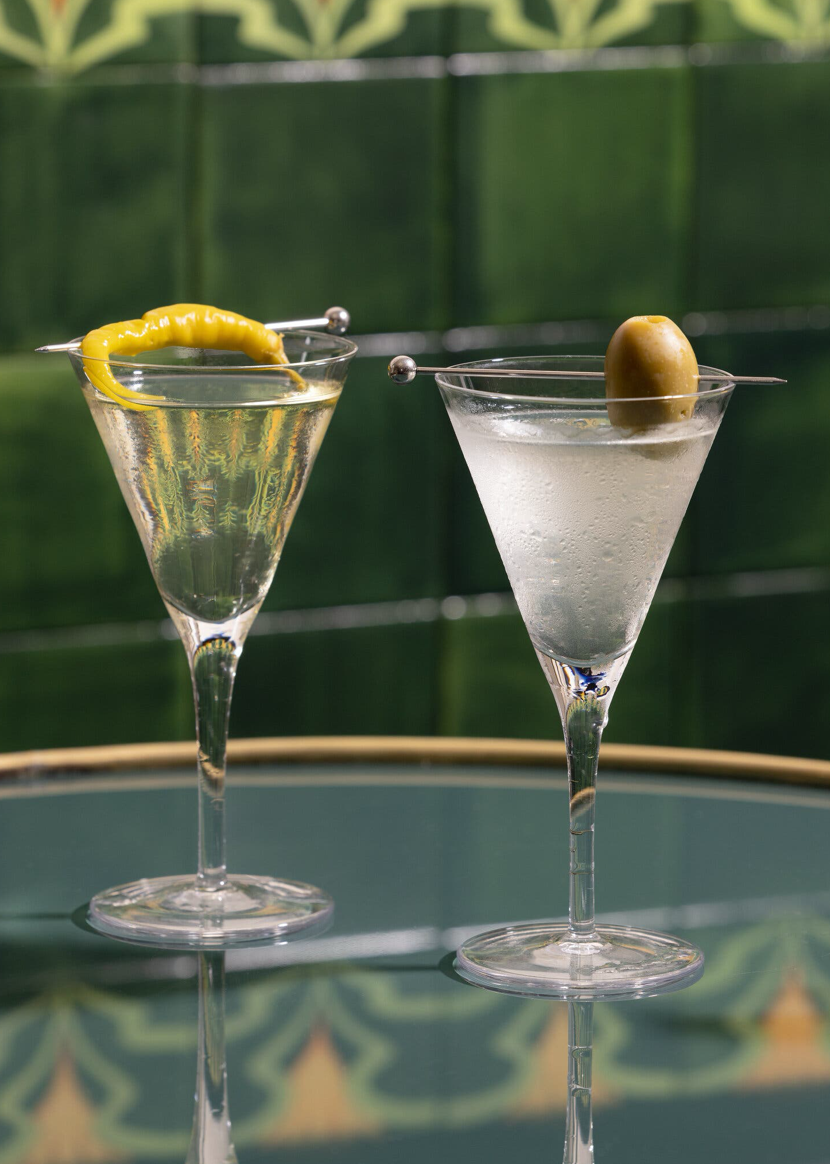 Mr. Ross pointed out that 20 years ago, bartenders didn’t have access to the wide variety of vermouths, sherries and other wine-based spirits imported today. This allows for a wider array of martinis that are nonetheless closer to the classic model than to the sweet potions of the ’90s.

The martini-thirsty public has also played a part in creating this expanding martini universe. Ashley Santoro, the beverage director of Deux Chats, which opened in July, in Williamsburg, Brooklyn, knew her customers were going to order standard martinis anyway. There was no point in listing a classic version on the menu. The two martinis available are the Deux Chats Martini, made with gin, vermouth, sherry and celery brine; and the Kinky Martini, made with red-thai-chile-infused vodka, a chile liqueur and two aperitifs.

If the cocktail revival of the past two decades has been a history of bartenders trying to correct bad practices and misunderstood cocktails, perhaps the new ’tinis are the ultimate correction, taking a chapter of cocktail history that had been written off as a train wreck and rewriting it as a creative embroidering on a classic.

Naren Young, the creative director of Sweet Liberty, sees value in making a great version of something that is often made poorly. “Maybe I can drink a good apple martini,” he said. “Maybe I can have a great lemon drop. There’s nothing wrong with it if it’s done well.”