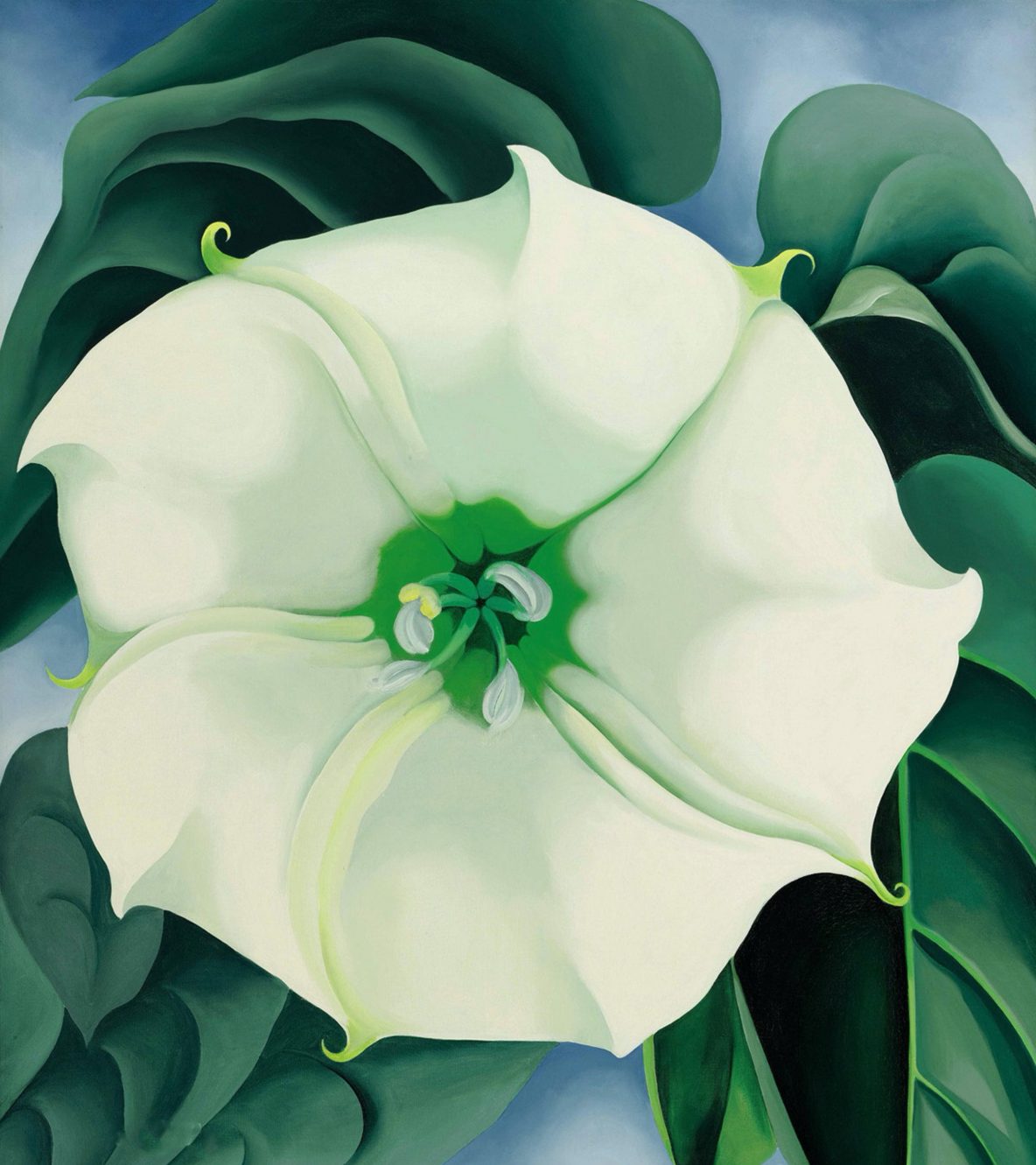 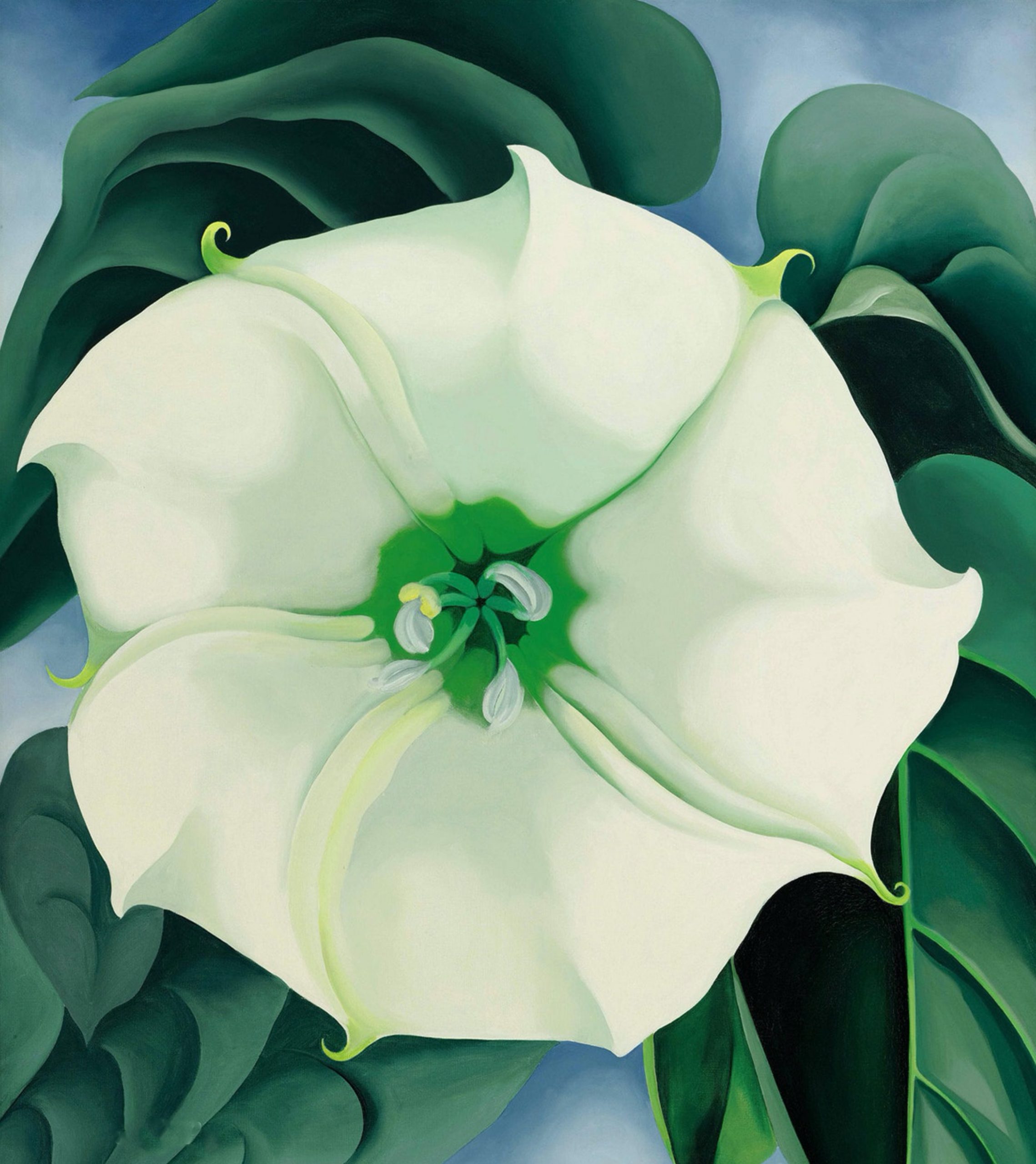 For Georgia O’Keeffe, they became a kind of prison, but she and other artists saw in them something that lies at the limits of human comprehension.

By Jessi Jezewska Stevens for The New Yorker

Maybe the word most associated with Georgia O’Keeffe is “vagina,” but it could just as easily be “cash.” Sold in 2014 for $44.4 million, “Jimson Weed/White Flower No. 1” holds the record for the highest price ever paid for a painting by a woman. A single white trumpet flower, cropped so close against an emerald tumult as to seem almost like a periscope peering out of a sea, it now hangs in the Crystal Bridges Museum of American Art, in Bentonville, Arkansas. A companion piece, less expensive, less vaginal, belongs to the Indianapolis Museum of Modern Art, about twenty minutes from where I grew up, in a suburb where fathers presented their daughters with promise rings.

For her entire career, O’Keeffe vehemently denied that her paintings had anything to do with female sex organs. This Freudian interpretation of her flowers originated not with her but with Alfred Stieglitz, the powerful photographer and gallerist who launched O’Keeffe’s career and who later became her husband. His association of her floral portraits with vaginas was, in retrospect, a brilliant bit of marketing, in many ways leading to the financial success of a work like “Jimson Weed.” It was also a brand that O’Keeffe struggled to escape for the rest of her life. In an introduction to a catalogue for a 1939 exhibition in New York, O’Keeffe made a bitter address to fans of her floral paintings: “You hung all your own associations with flowers on my flower and you write about my flower as if I think and see what you think and see of the flower—and I don’t.”

In this way, flowers became for O’Keeffe a kind of prison. Jimson weeds and irises overwhelmed and overshadowed her later renderings of deserts and red hills, “because,” as she wrote in the same introduction, “a red hill has no particular association for you like the flower has. . . . I fancy this all hasn’t much to do with painting.” Certainly, it would seem to have something to do with Stieglitz, but perhaps even more with the flowers themselves.

O’Keeffe was not the first to lament the expectations flower painting placed on women. For centuries, excess floral emphasis gaslighted the fairer sex into overidentification. In 1883, a cantankerous male contributor to The Massachusetts Ploughman complained that women had come to believe themselves endowed with an “innate comprehension” of flowers. The culmination of this overconfidence, he lamented, was the overrepresentation in local exhibitions of women artists (responsible for “more than half” of the flower paintings shown), when, in fact, there are “many who paint flowers creditably, and only a few, and those not usually women, who paint them worthily.” One detects in this charge a note of jealousy, but also genuine aesthetic dismay of a tenor not incompatible with the views of America’s Flower Queen: “Still—in a way—nobody sees a flower—really—it is so small—we haven’t time—and to see takes time like to have a friend takes time,” O’Keeffe wrote in the 1939 catalogue. Not everyone can see a flower “worthily,” let alone represent it.

And yet, for all the care that O’Keeffe took—to see flowers as they are, to be “surprised into” seeing them—flowers, in the end, screwed her over. Flowers do this a lot, and not only to women. Following the Dutch and English penetration of Asia, the Caribbean, and Africa, Renaissance Europe was abuzz with bio-speculation; it is impossible to separate the rise of the Western floral arts from colonialism. In the seventeenth century, the tulip, native to Turkey, became to the Netherlands what the tomato was to Italy, plus rampant financial speculation: for a brief time, a single bulb cost more than the average Dutchman’s annual salary. The 1637 bubble in tulip prices is now a textbook case for the first failure in futures markets, with the subsequent collapse wiping out the mortgages of the Dutch middle class. The following decade brought on a frenzy in hyacinths.

The real beneficiaries of tulip mania were, perhaps, the flower painters. It should be no surprise that the genre’s most accomplished forebears are Dutch. Among them was Rachel Ruysch, whose delicate, bountiful bouquets populate urns and dark niches—a play of chiaroscuro in the style of the times. The daughter of a horticulturist and physician, Ruysch’s career was boosted, in an auspicious turn for capitalist feminism, by consumer demand for floral specimens rendered in oil paint. The city of Amsterdam sent one of her contemporaries, the naturalist and entomologist Maria Sibylla Merian, to Suriname to draw plants.

For years, this was the status quo: men painted women, women painted flowers. As the center of painting shifted from the Netherlands to France, men’s paintings of women ended up in the grand salons, while women’s paintings of flowers landed in the apartment foyers of the type of Parisians who attended the salons only to be shocked by the unveiling of Gustave Courbet’s “The Origin of the World.” One can hardly hang a vagina in a respectable entryway, unless it’s disguised as a flower, of course. But if women continued, disproportionately, to paint bouquets, it wasn’t necessarily by choice. As the French painter Marie Bracquemond, one of only three women to be featured in the Impressionist exhibitions, complained, women in art school in nineteenth-century Paris were assigned “only the painting of flowers, of fruits, of still lifes, portraits and genre scenes.” Formal painterly education for men, meanwhile, revolved around the anatomy of the nude—in particular, nude women.

However much she may have resented the suggestion, O’Keeffe’s flowers might have served, several decades earlier, as a subversive hack, an anatomical study of the sort from which women were barred. There is an undeniable symmetry between a painting like “Jimson Weed/White Flower No. 1,” from 1932, and “The Origin of the World,” from 1866. Courbet’s composition parallels O’Keeffe’s signature close-cropping. We see a breast, a torso, a sliver of buttocks like another fold in the sheets, and there, smack center, the “origins” of man. Viewed side by side, it’s hard not to see how the focus of the earlier work, the vagina, might be transposed onto the focus of the later, a flower, and back again. Anticipating the uproar that his painting would cause, Courbet—presumably wanting to spare his model any infamy—refrained from painting her face.

In a dream sequence in Toni Morrison’s “Song of Solomon,” the protagonist, Milkman, looks into the garden to find his mother kneeling in her tulip patch, planting bulbs in the frozen winter ground. She appears drained, desultory. He’s wondering why she chooses to garden in such miserable weather when the tulips suddenly, fantastically, race into fruition. They bloom, grow tall, menacing his mother. They seem to beat her—“He could see only her shoulders above them and her flailing arms high above those bobbing, snapping heads. They were smothering her, taking away her breath with their soft, jagged lips.” In recounting the dream to a friend, Milkman means to make a certain point—why garden, why do anything, if one pursues the hobby as mechanically as his mother does?—but his friend, upon hearing the story, is distracted by Milkman’s own complacency. “Why didn’t you go help her?” he says. Milkman is surprised. “But she liked it,” he protests. “She was having fun.”

Women belong in the garden. In the original Song of Solomon, the female lover is “the lily of the valley,” “a garden locked up, my sister, my bride.” Later, when Milkman’s mother reflects on the garden in which she’s been locked up all her life, an epiphany arrives: “Suddenly, the world opened up for her like one of her imperial tulips and revealed its evil yellow pistil.” Because flowers can be phallic, too, though that’s not the association that resonates.