Charlotte Rampling through the eyes of PhotographerPEPPE TORTORA for ©Grey Magazine

I’m a little confused, Francois Nars, the founder and creative director of the cosmetic brand bearing his name announced that the new face of Nars would be the 68 year, (note making a point of her age) old Charlotte Rampling.

He would be shooting his muse in black and white, portrait style. At last a real woman- I thought- who from various images published recently has had no outside intervention.

One is left to wonder, then, why, when the cosmetic industry claims it would like to have a real conversation with women of our age, they photoshop this beautiful woman wiping out all of her hard won patina leaving a blank canvas. Are we meant to think the product rendered her lineless, pumped, looking like a store shop mannequin. Where is the integrity in that?

According to Australian Vogue “ In a supposed backlash against underage models, many brands are realising the potential in advertising to an older clientele with more mature models. Karen Walker’s 2013 eyewear campaign by Advanced Style photographer Ari Seth Cohen featured women aged between 65 and 92, Louie Vuitton’s spring/summer’14 stars a range of women, including 70 year old Catherine Deneuve, ( and her obvious face work). The Row has used a sexagenarian skincare empress Linda Rodin for its pre-fall 2014 look book. 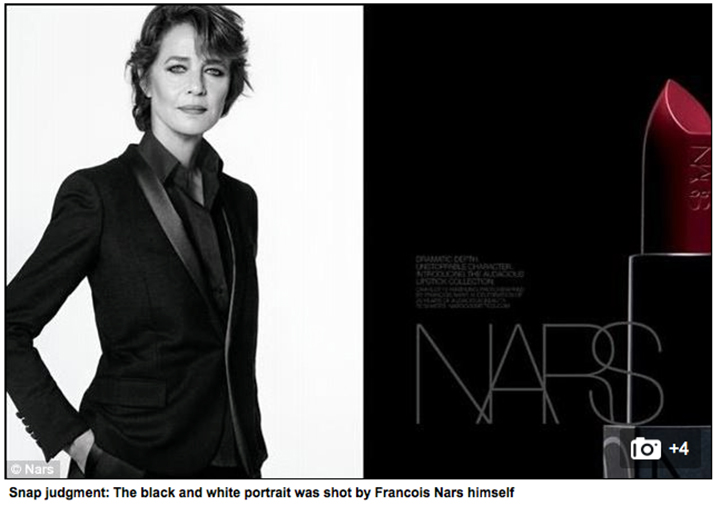 Charlotte Rampling as seen by Francois Nars in a lipstick advertisement

In the words of La Rampling herself…”This is how it is. I’m a very attractive woman despite my age – get used to it”.