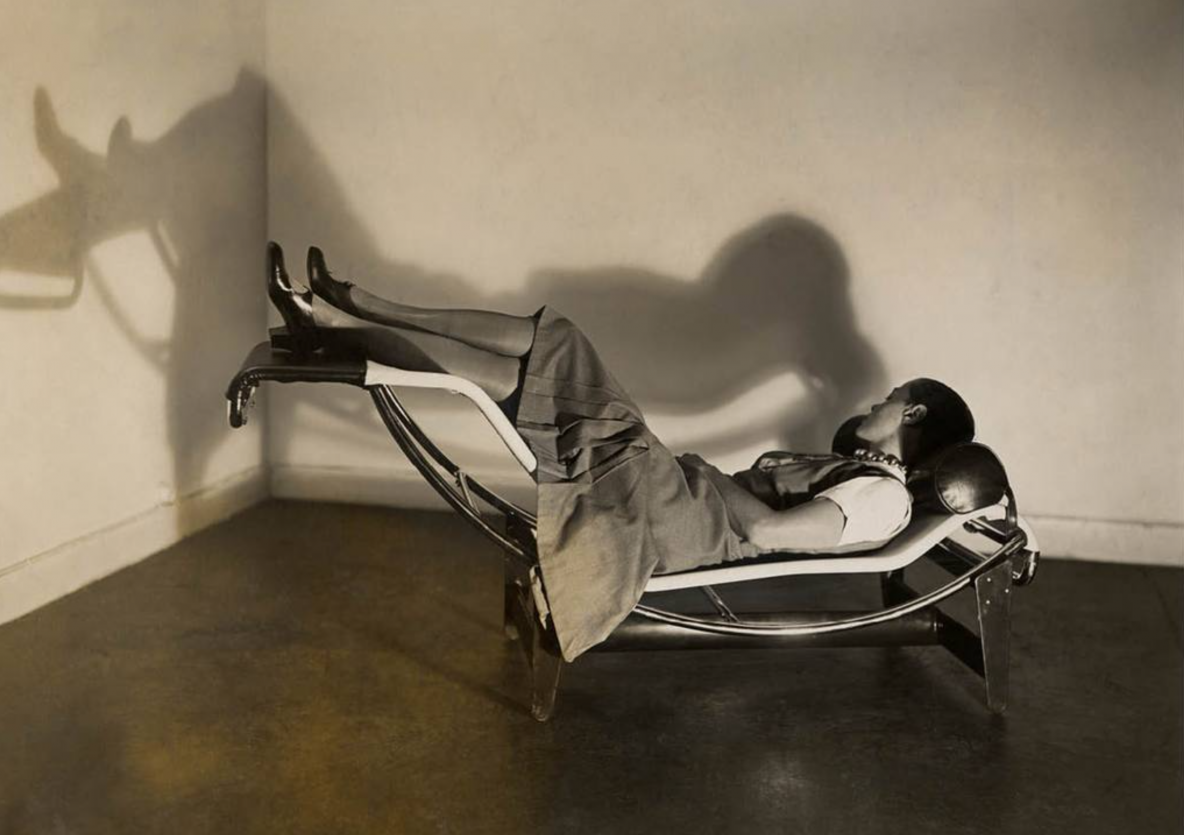 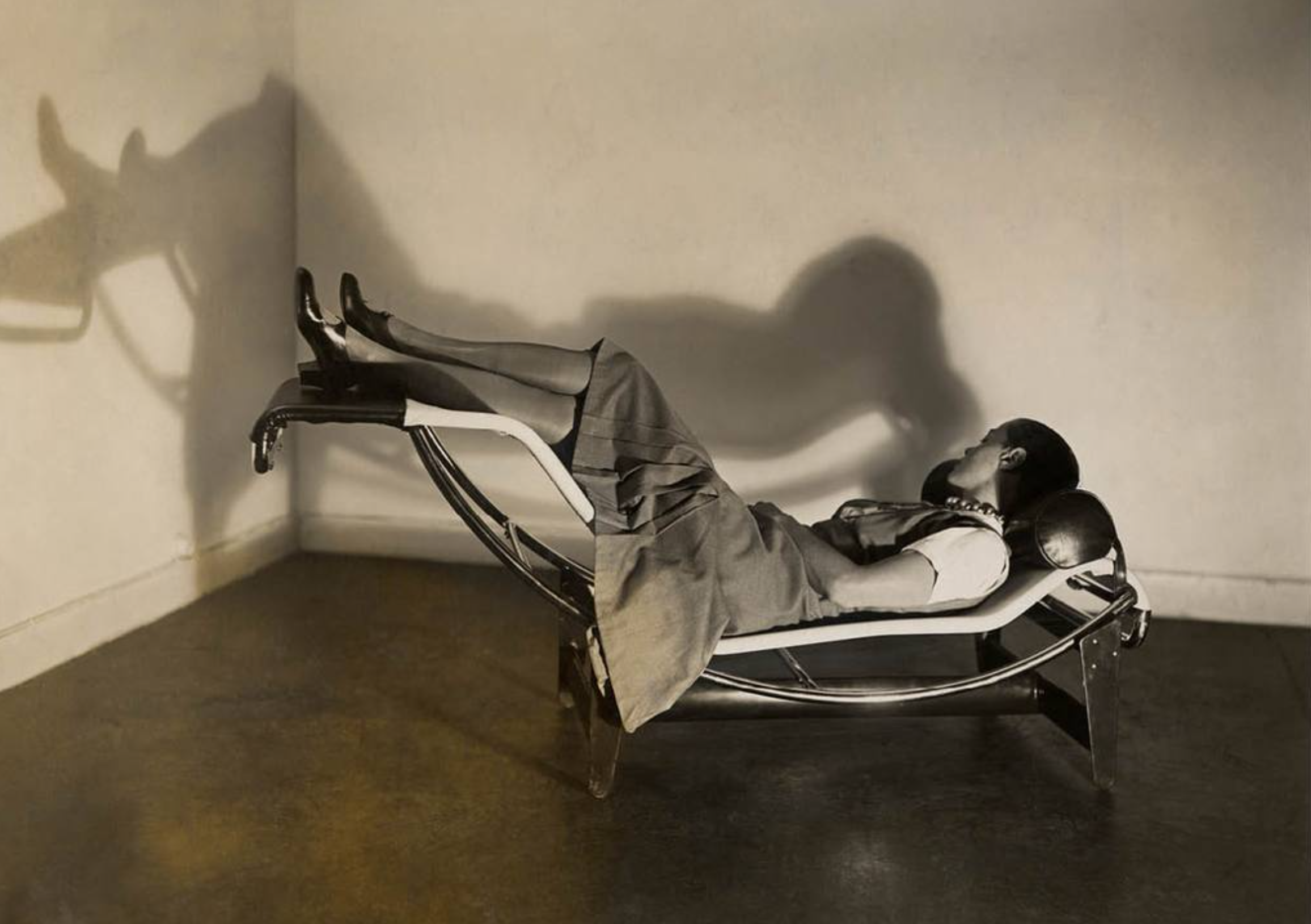 This article by Kate Lawson for Toast Magazine

Whenever I think of the French architect, designer, and pioneering creative force, Charlotte Perriand, she is forever the beguiling image of a woman languorously draped across a tubular steel chaise longue, her pleated skirt loosely arranged around her, wearing a trademark homemade steel ball-bearing choker necklace that was her accessory of choice. The photograph, taken in 1929 by a friend of Perriand, signified a new age of modernity and femininity, and captured a designer who defied the confines of an era dominated by men, to revolutionise our modern world.

Perriand was in fact the principal designer of the now iconic Chaise Longue Basculante B306 upon which she was lying, also credited to the Atelier Le Corbusier-Pierre Jeanneret, which she joined at the age of 24 in 1927, after Le Corbusier had initially turned her away, famously saying, “We don’t embroider cushions here.” But after visiting her presentation at the Salon d’Automne that year, featuring her Bar Sous Le Toit or bar under the roof, in which she recreated a section of her own apartment, with its glass and aluminium surfaces, Le Corbusier immediately hired her to lead his design studio.

Alive with bright ideas, Perriand was behind much of the beautifully ergonomic modern steel, aluminium, and glass furniture we associate with the early modernist movement, like the Fauteuil Pivotant leather swivel chair and the cube-shaped Grand Confort armchair, all branded with the LC Collection moniker, but their true author was Perriand — her maverick vision often at the centre of the progressive change in the course of aesthetics and lifestyle in the 20th century, despite being overshadowed by the male peers with whom she collaborated with. 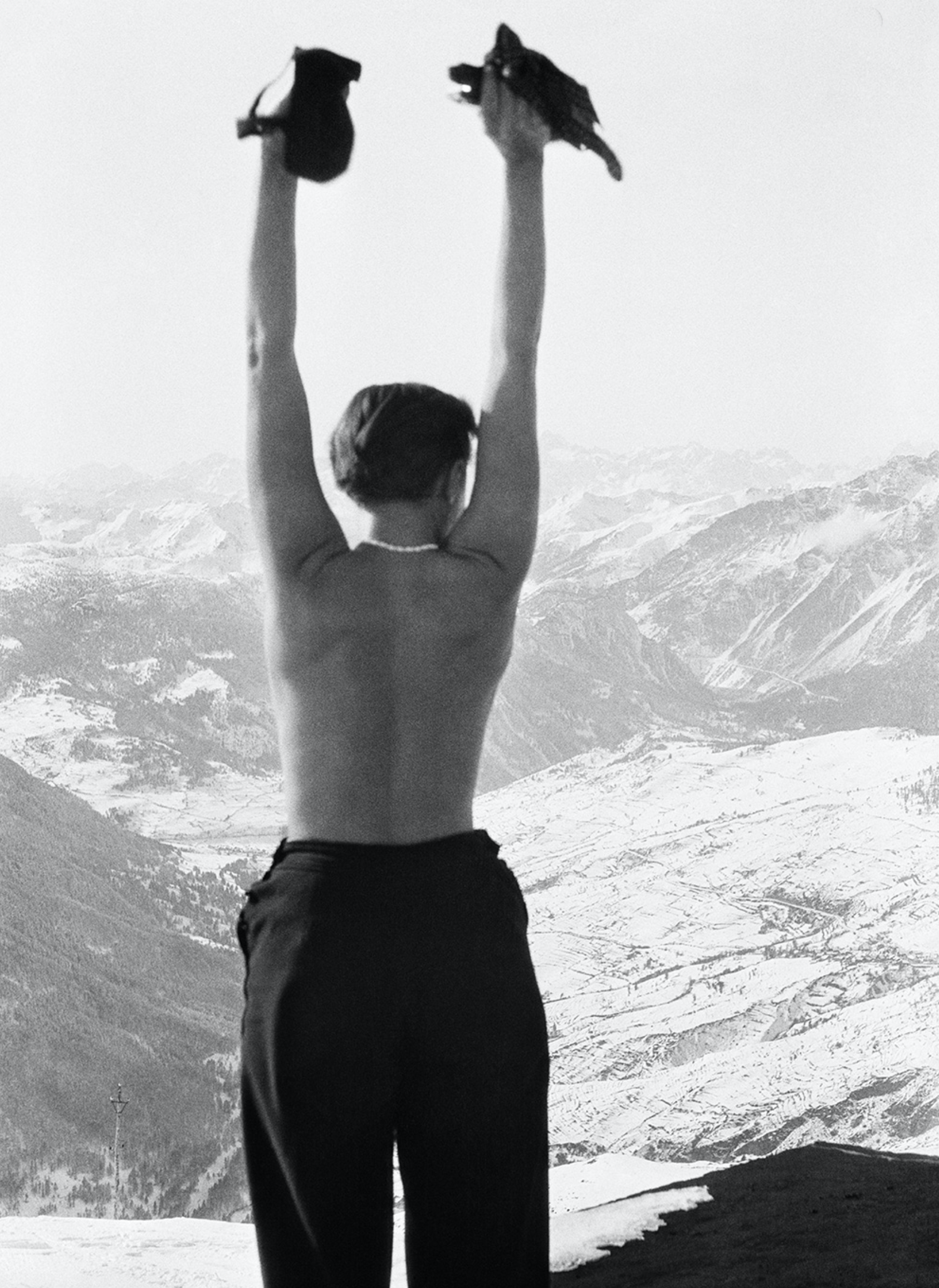 of course, the very nature of a major exhibition dedicated to such a trailblazing spirit helps to rectify historical imbalances, and 22 years after her death in 1999, Perriand is receiving her due once more in an epic retrospective entitled ‘Charlotte Perriand: A Modern Life’, to be staged at London’s Design Museum in June. In partnership with the Perriand family and the Fondation Louis Vuitton, the exhibition will showcase furniture, photographs, sketches, prototypes and final pieces, shedding new light on Perriand’s unique creative process. “She is definitely one of the most important female designers of the 20th century – perhaps the most important,” says Justin McGuirk, Chief Curator at the Design Museum. “It’s precisely because there are relatively few women in the canon of 20th century design that she is a role model,” he continues. “One of the things I like to emphasise about Perriand is that she was a natural collaborator – she subverts the Corbusian archetype of the lone make genius (which is always a myth, of course). For Perriand, collaboration is a natural, productive and social way of working, and this is another reason why I think she is a role model for contemporary designers.”

After stepping out from behind Le Corbusier’s long shadow and machine age technology in the late 1930s, Perriand established herself as an independent designer, working on the commercial interiors for Air France in London (1958), the French Railways office in London, (a collaboration with Ernö Goldfinger in 1963) and the Japanese tea house for the UNESCO garden in Paris in 1993. Perriand termed her broad vision of creativity as a “synthesis of the arts,” an approach where design, art and architecture come together, governed by the ‘art de vivre’ (art of dwelling). “Dwellings should be designed not only to satisfy material specifications; they should also create conditions that foster harmonious balance and spiritual freedom in people’s lives,” she insisted, an ethos that continues to resonate through contemporary architecture and design today. 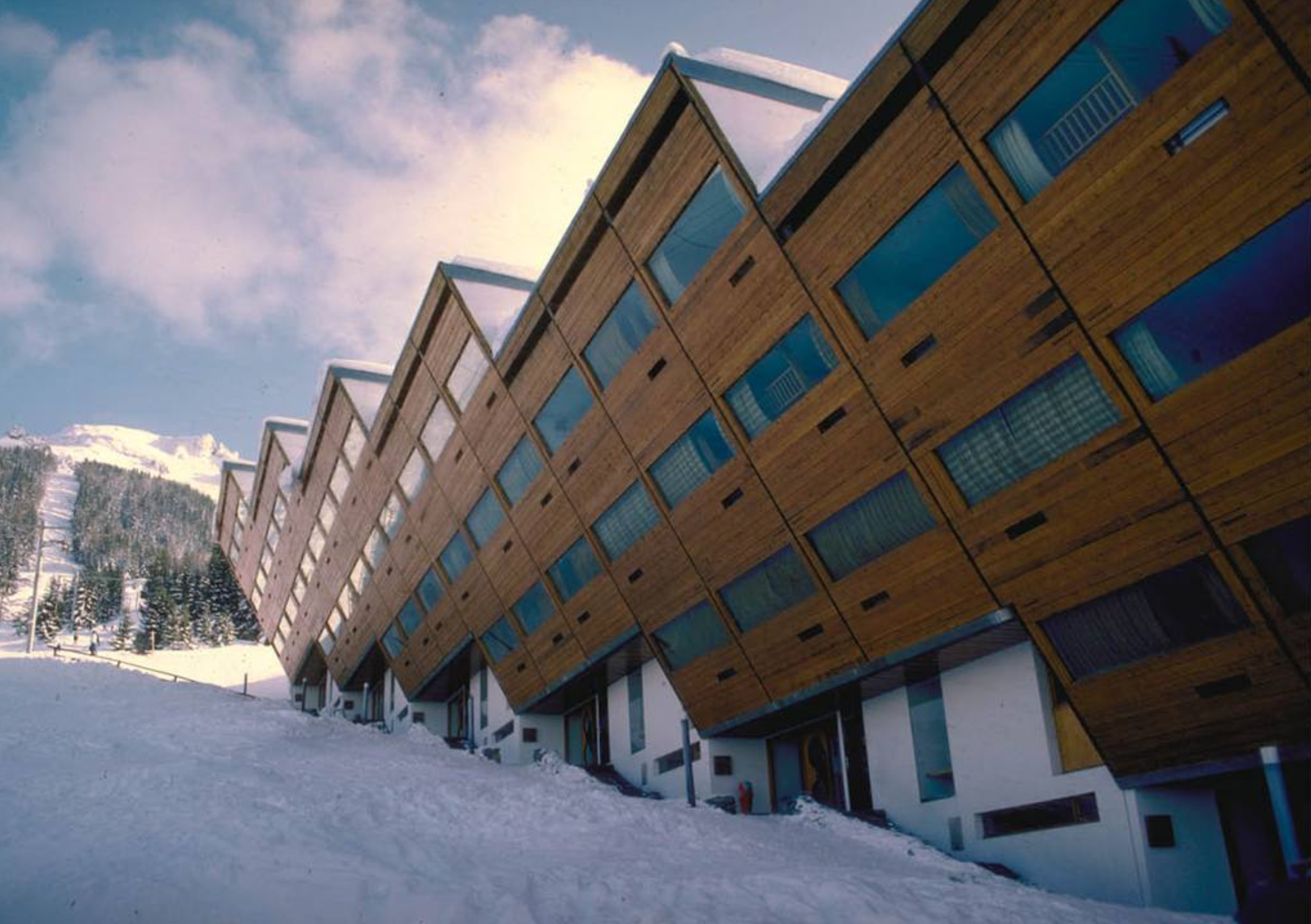 Particularly empathetic, her work always touched on profoundly human elements and Perriand believed design should play a crucial role in finding solutions to make society more equal, and that the objects around us should help to define our mental state. She offered up a new manifesto for modern living creating adaptable domestic spaces which were radical for the time, such as The Cuisine-Bar (1952), a modular kitchen at Le Corbusier’s Unité d’Habitation in Marseille. Perriand removed the divisions between rooms and made the kitchen part of the living area, so women were no longer locked away — the concept of social open-plan living that we are familiar with today. In the 1970s at Les Arcs ski resort in Savoy (where she spent much of her childhood and developed her passion for skiing), she synthesised her ideas into masterminding early prefabricated bathrooms, kitchen pass-throughs and a flexible relationship between indoor and outdoor spaces.

The reconstructions of some of Perriand’s real domestic interiors at the Design Museum’s exhibition, will allow visitors to physically connect with her work. “The beauty of that is that you can see the furniture in one of the settings it was designed for.” enthuses McGuirk. “The furniture almost always plays a specific spatial role, and it’s easier to understand that in-situ. But, in the Salon d’Automne room for instance, visitors will actually be able to sit on the furniture (since those pieces are still in production by Cassina) and see what a Perriand chair feels like. That’s quite rare in a design show.”

In later years, Perriand began to explore the potential of wood, a far less expensive material than metal, and there was a more organic, sensuous feel to her designs. She blurred the lines between the mechanical world of the indoor, with a sensitivity to the organic world, looking to nature for inspiration. She would often photograph driftwood and rocks on the shores of Normandy where she walked with close friend Fernand Léger, and she enjoyed callisthenics in the mountains of the Alps, studying the flow and grace of movement, and trips to Japan where she discovered the lightness and subtlety of bamboo — all of which transpired into her work. There are echoes of driftwood in the curvaceous wooden tables she made for herself and friends, and an updated version of her famed chaise longue remade in bamboo. 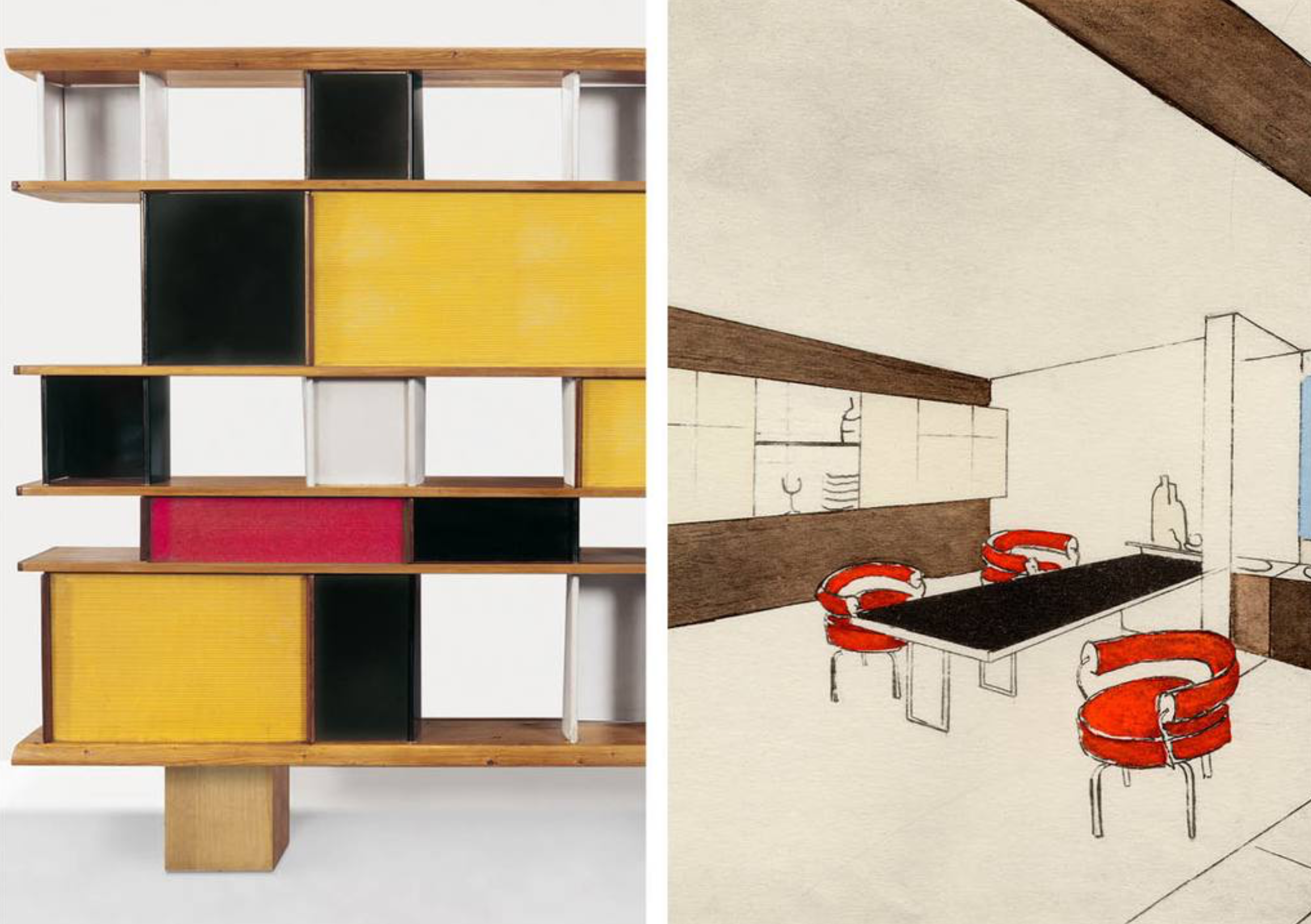 Asian culture played a critical role in the evolution of Perriand’s design philosophy, living in Japan and Vietnam between 1940 and 1946, she absorbed the essence of their designs, integrating them into projects: sliding cabinet doors, stair storage, the Tunisie bookcase and the much-coveted Nuage (cloud) bookshelf, which she thought added rhythm to a space, a modular unit that could be rearranged in various configurations, thanks to sliding panels, trays, and shelves. “Perriand’s bibliotheques (bookcases) were ahead of their times,” says McGuirk. “They were modular designs that could be assembled in different ways, making the buyer a participant in the final work. They are also important because they illustrate Perriand’s approach to furniture as an architectural element – they weren’t just storage units but space dividers that could replace the need for walls.”

Despite championing design that should be affordable, functional and accessible to all, none of Perriand’s designs ever made it to the mass market. Today, her celebrated LC4 chaise longue manufactured by Cassina, retails for more than £4,000. Much like the Eames recliner, it has become a visual metaphor for the type of cult status furniture that graces the living rooms of those who can afford it. More than a designer though, Perriand was a visionary who softly changed the world for the better, and put simply, our way of living today would not be the same without her, and she remains more relevant than ever. In her own words: “In every important decision there is one option that represents life, and that is what you must choose…Life is something in motion”.