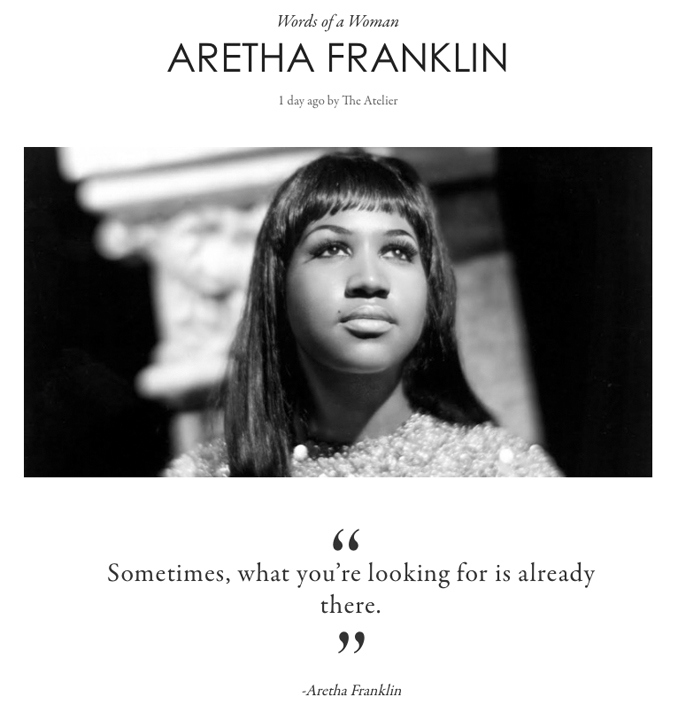 Officially, “Respect” is a relationship song. That’s how Otis Redding wrote it. But love wasn’t what Aretha Franklin was interested in. The opening line is “What you want, baby, I got it.” But her “what” is a punch in the face. So Ms. Franklin’s rearrangement was about power. She had the right to be respected — by some dude, perhaps by her country. Just a little bit. What did love have to do with that?

Depending on the house you grew up in and how old you are, “Respect” is probably a song you learned early. The spelling lesson toward the end helps. So do the turret blasts of “sock it to me” that show up here and there. But, really, the reason you learn “Respect” is the way “Respect” is sung. Redding made it a burning plea. Ms. Franklin turned the plea into the most empowering popular recording ever made.

Ms. Franklin died on Thursday, at 76, which means “Respect” is going to be an even more prominent part of your life than usual. The next time you hear it, notice what you do with your hands. They’re going to point — at a person, a car or a carrot. They’ll rest on your hips. Your neck might roll. Your waist will do a thing. You’ll snarl. Odds are high that you’ll feel better than great. You’re guaranteed to feel indestructible.

Ms. Franklin’s respect lasts for two minutes and 28 seconds. That’s all — basically a round of boxing. Nothing that’s over so soon should give you that much strength. But that was Aretha Franklin: a quick trip to the emotional gym. Obviously, she was far more than that. We’re never going to have an artist with a career as long, absurdly bountiful, nourishing and constantly surprising as hers. We’re unlikely to see another superstar as abundantly steeped in real self-confidence — at so many different stages of life, in as many musical genres.

That self-confidence wasn’t evident only in the purses and perms and headdresses and floor-length furs; the buckets and buckets of great recordings; the famous demand that she always be paid before a show, in cash; or the Queen of Soul business — the stuff that keeps her monotonously synonymous with “diva.” It was there in whatever kept her from stopping and continuing to knock us dead. To paraphrase one of Ms. Franklin’s many (many) musical progeny: She slayed. “Respect” became an anthem for us, because it seemed like an anthem for her.