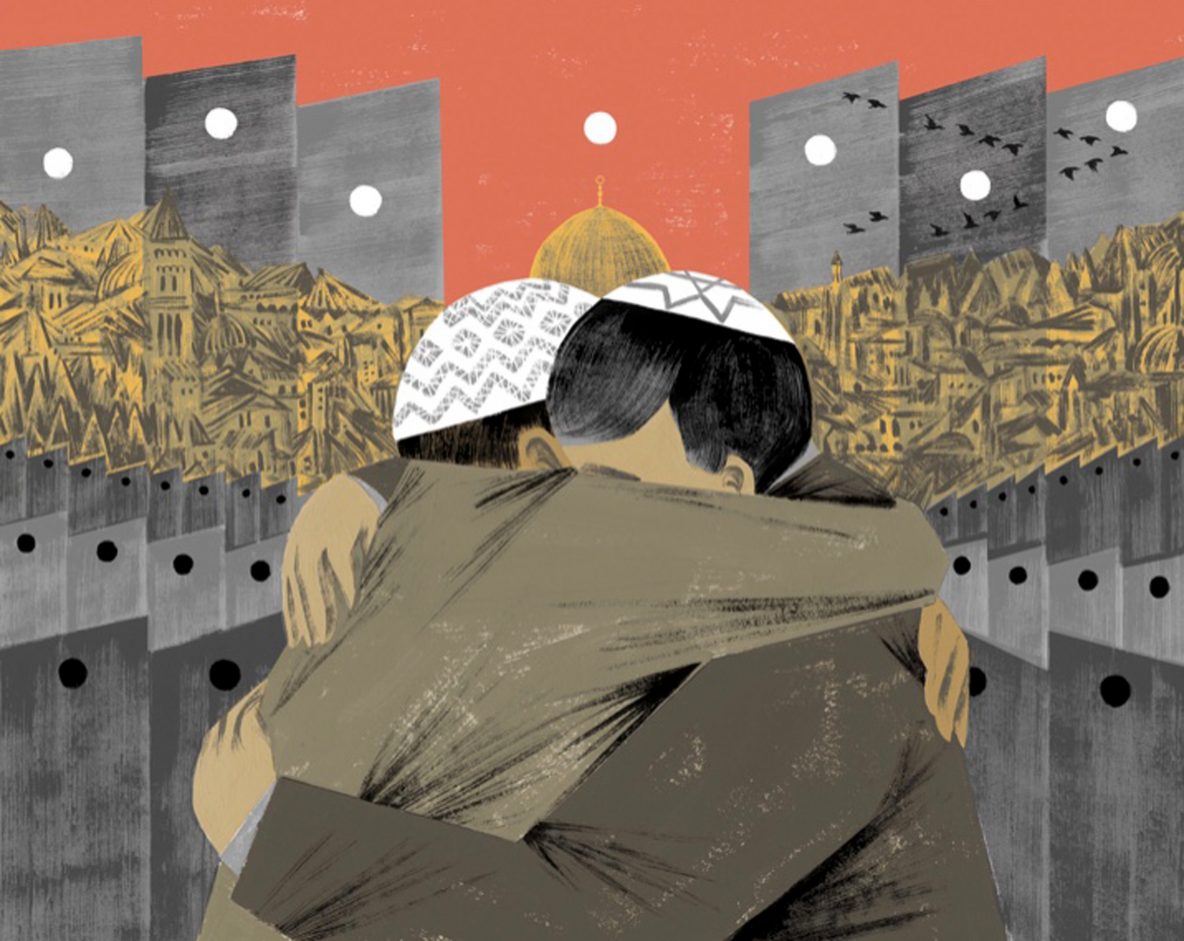 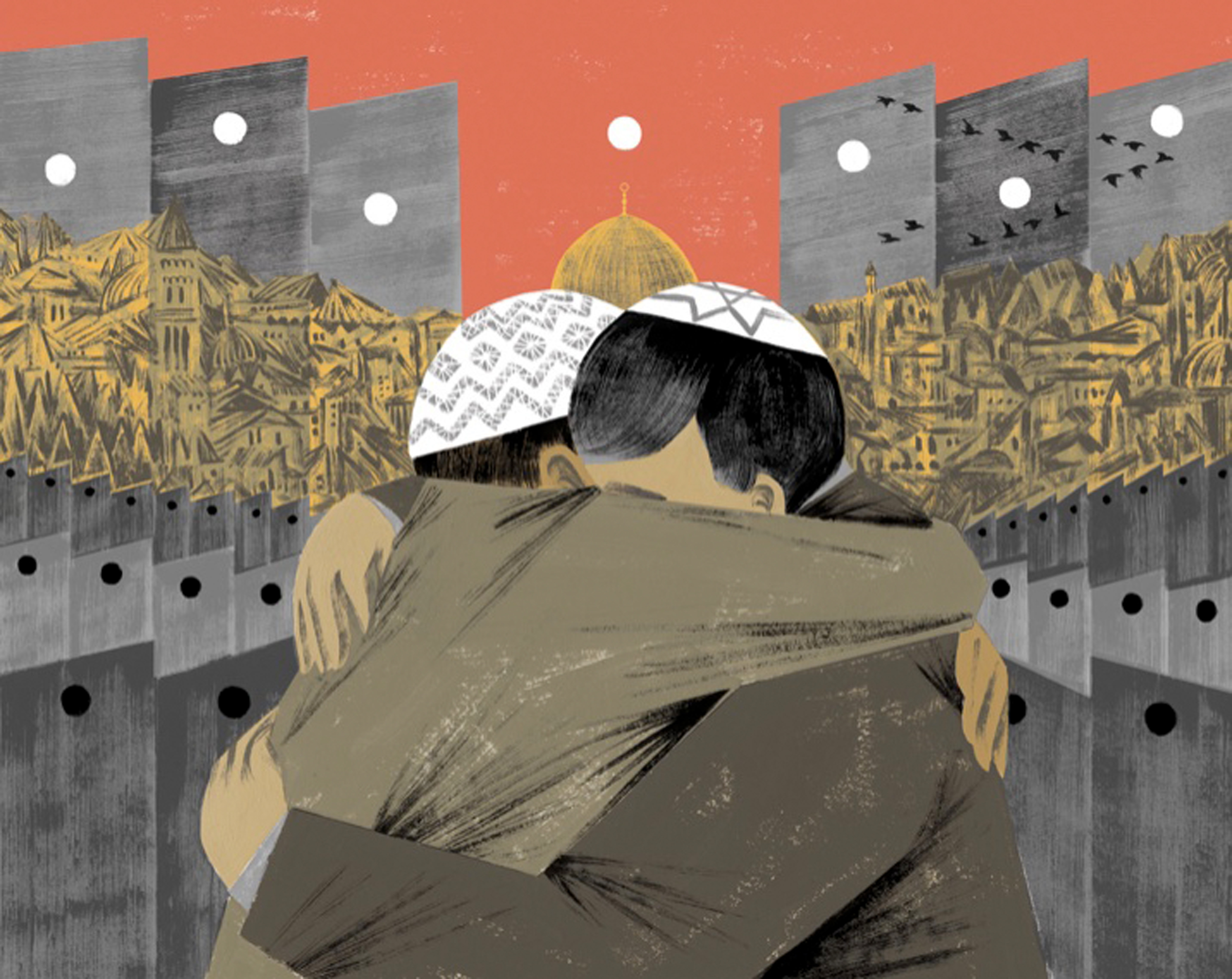 I am incredibly grateful to my friend Colleen Ryan who suggested I read this book Apeirogon by Colum McCann. Glimmers of hope, understanding are wrung from the depths of despair, it is an extraordinary book.

Colum McCann Gives Voice to Grieving Fathers, One Israeli and One Palestinian - A review in the New York Times by By Julie Orringer

On Sept. 4, 1997, 13-year-old Smadar Elhanan — dressed in a Blondie T-shirt, her hair cut short, her Walkman playing Sinead O’Connor’s “Nothing Compares 2U” — was walking down Ben Yehuda Street in Jerusalem when three young Palestinian men detonated suicide belts, killing themselves, Smadar and four others. A decade later, and less than three miles away, 10-year-old Abir Aramin, wearing her school uniform and holding a candy bracelet she’d just bought, was shot in the back of the head by an 18-year-old Israeli soldier as his jeep sped around a corner. The local Palestinian clinic where Abir was treated had little working equipment, so doctors decided to transfer her to a better-equipped hospital on the other side of the wall. Her ambulance was delayed for hours at a border checkpoint, and she died two days later at Hadassah Hospital in Jerusalem, the same hospital where Smadar was born.

These real-life events form the seed of “Apeirogon,” Colum McCann’s powerful and prismatic new novel. An apeirogon is a polygon with an infinite yet countable number of sides. This novel, divided into 1,001 fragmentary chapters — a number alluding to “The Thousand and One Arabian Nights” — reflects the infinite complications that underlie the girls’ deaths, and the unending grief that follows. Its primary subject is the fraternal relationship between the girls’ fathers, Bassam Aramin, a Palestinian Muslim, and Rami Elhanan, an Israeli Jew. Aramin co-founded the activist group Combatants for Peace; Elhanan joined up after his son Elik brought him to a meeting, some seven years before Abir’s death. By the time Abir was shot, Elhanan and Aramin were close friends. The new loss made them brothers. Since 2007 they’ve traveled all over the world together, speaking about what they experienced and why they believe that a peaceful end to the occupation is not only possible, but necessary.

The chapters that capture their experience — and convey so much else about life in the Holy Land — move freely through time and space. They’re numbered from 1 to 500 and then back from 500 to 1, with Chapter 1,001, the ending, located at the direct center of the book. Both Chapter 500s consist of the fathers’ first-person accounts of their losses and their paths toward activism. Those chapters are bookended by two pages starkly illustrated with small photos of what might be desert or ocean: the visual equivalent of a moment of silence. The text of Chapters 500 and 500 comes directly from the source material; in the note that precedes the novel, McCann tells us they’re “pulled together from a series of interviews in Jerusalem, New York, Jericho and Beit Jala.” Indeed, you can find bits of those chapters online in articles from The New York Times and The Guardian; these fathers’ grief-stricken voices are already part of the public consciousness. By placing them at the center of the book, and by setting them off formally, McCann indicates their primary importance in the novel. They’re also the most intimate pages of the book, and the most difficult to read.

“I still sit in that ambulance every day,” Bassam tells us. “I keep waiting for it to move. Every day she gets killed again and every day I sit in the ambulance, willing it to move, please move, please please please, just go, why are you staying here, let’s just go.” Rami, recounting the moments before he learns for certain that Smadar is dead, says: “You find yourself running in the streets, in and out of shops, the cafe, the ice cream store, trying to find your daughter, your child, your Princess — but she has vanished. … You go from hospital to hospital, police station to police station. … You do this for many long hours until eventually, very late at night, you and your wife find yourselves in the morgue.”

These stories are so powerful, and so excruciating, that a reader might wonder what more a writer can do beyond reporting them. Do we need to hear anything else? What can the 450 surrounding pages possibly contain? Do those pages draw attention from the source material, dilute its power — or, worse, stylize its tragedy, as often happens when an artist tries to capture a conflict outside of his own experience?

In fact, they do the opposite. McCann’s brilliant act of novel-making builds a wholly believable and infinitely faceted reality around Rami’s and Bassam’s first-person accounts, a rich and comprehensive context that allows us into the fathers’ experiences, their histories, their minds. Intricate reconstructions of the girls’ deaths are broken up by stories of what it feels like to inhabit the Israel of recent decades — what it was like for Bassam to be imprisoned for seven years beginning at age 17, for example, after he tossed a broken hand grenade at an Israeli jeep; what it was like to be beaten daily in jail, and then to learn his captors’ history and lose his ability to see them as his sworn enemies. We learn about Rami’s time in the Israeli Army, about his experience in a tank repair unit during the Yom Kippur War, fighting and killing an enemy he couldn’t see. We learn about his early relationship with Smadar’s mother, Nurit; about his successes as a graphic designer; about his desire for a “spectacularly banal” life: “A good job, a mortgage, a safe street, leafy, no knock on the door, no midnight phone calls.” We learn, in essence, who Bassam and Rami were before their daughters’ deaths, and who they became after.

Interspersed with these narratives are fragments that might at first glance seem merely tangential: lists of migratory bird species, ballistics facts, quotes from Borges and Darwish, Israeli/Palestinian bumper-sticker mottoes (“It will not be over until we talk”), excerpts from school reports, a photograph of a defunct waterpark, stories of musical performances in Theresienstadt, an account of Philippe Petit’s high-wire walk over the Hinnom Valley (yes, fans of “Let the Great World Spin,” he’s here too), and the detailed, moment-by-moment mechanics of Christ’s crucifixion, among other things. These pieces, too, quickly argue their own relevance and necessity. When we learn, for example, the names of 36 species of migratory birds that traverse an ancient and perilous flight path over Israel every year, then study the design of the slingshots boys used thousands of years ago to bring those birds down — and then learn that Bassam was in the habit of slinging stones in protest before he threw the grenade that landed him in prison, and finally that the shooter who killed Abir thought he was under attack by protesters throwing stones — we understand that the earlier sections weren’t really about birds or slingshots, but about the millions of factors — geographic, historical, political — that lead to a senseless death. Throughout the novel, McCann deftly connects these micro-narratives to Smadar and Abir’s stories, and to their fathers’; they are the complex stuff of life in Israel.

Amid this marvelous complexity I found myself listening hard for women’s voices, especially those of the girls’ mothers. Rami’s wife, Nurit Peled-Elhanan, is an award-winning philologist, academic and peace activist; Salwa Aramin, mother of six, is a mystery, though when she appears in this book, she’s fascinating: possessed of a teasing sense of humor, intellectual curiosity, fierce purpose, deep grief. McCann interprets Salwa’s silence as a choice: If the journalists “could have understood her anger, if they could somehow have captured it without making a spectacle of it, she would have talked with them, but she knew, she just knew: a Muslim woman, a Palestinian, the crime of her geography. She supported what Bassam did, Rami too, Nurit as well, but she wanted only to pursue the ordinary. She would find blessing there.” In these pages, though, her silence isn’t necessary. And, as Salwa notes, Nurit Peled-Elhanan isn’t interested in remaining silent at all. In the weeks following her daughter’s death, she spoke to the press about her belief that Israeli government policies were responsible for the suicide bombers’ act. The book includes this information, but might have allowed us more access to Peled-Elhanan’s consciousness, or perhaps to Rami’s imagining of his wife’s feelings.

Even so, the novel succeeds brilliantly at its larger project. If we grasp the minute reality of Smadar and Abir’s deaths — if we know how a suicide belt detonates and how shrapnel flies, if we understand how a rubber bullet compresses upon impact, and how it fragments a skull — then we’re forced to understand that history happens to actual human beings, to our children, to us. And if, as we read, we experience the fugue-like recurrence of those details and hundreds of others, we begin to understand what it might be like for the girls’ fathers to have to relive the minutiae of their daughters’ deaths, day after day, forever. Reading “Apeirogon,” we move beyond an understanding of Rami and Bassam’s grief from the outside; we begin to share it. And this, in fact, is what Rami and Bassam want in real life: for as many of us as possible to feel what they felt, through an accurate retelling of their story. This is why they told it to McCann and others, in a scene detailed in Chapter 1,001; it’s why they travel the world together, retelling it every day. McCann’s book is a sensitive response to their work. It carries the story forward, and leads us to experience the urgency of finding a solution to the underlying problem. “Once I thought we could never solve our conflict,” Bassam tells us; “we would continue hating each other forever, but it is not written anywhere that we have to go on killing each other. The hero makes a friend of his enemy. … When they killed my daughter they killed my fear. I have no fear. I can do anything now.”

It’s one thing to read those lines in a newspaper report; it’s another to feel them from the inside. “Apeirogon” is an empathy engine, utterly collapsing the gulf between teller and listener. By replicating the messy nonlinear passage of time, by dealing in unexpected juxtapositions that reveal latent truths, it allows us to inhabit the interiority of human beings who are not ourselves. It achieves its aim by merging acts of imagination and extrapolation with historical fact. But it’s indisputably a novel, and, to my mind, an exceedingly important one. It does far more than make an argument for peace; it is, itself, an agent of change.

“I began to think,” Rami tells us in his central chapter, “that I had stumbled upon the most important question of them all: What can you do, personally, in order to try to help prevent this unbearable pain for others?”

McCann has registered his answer, one so powerful that it impels us to find our own.