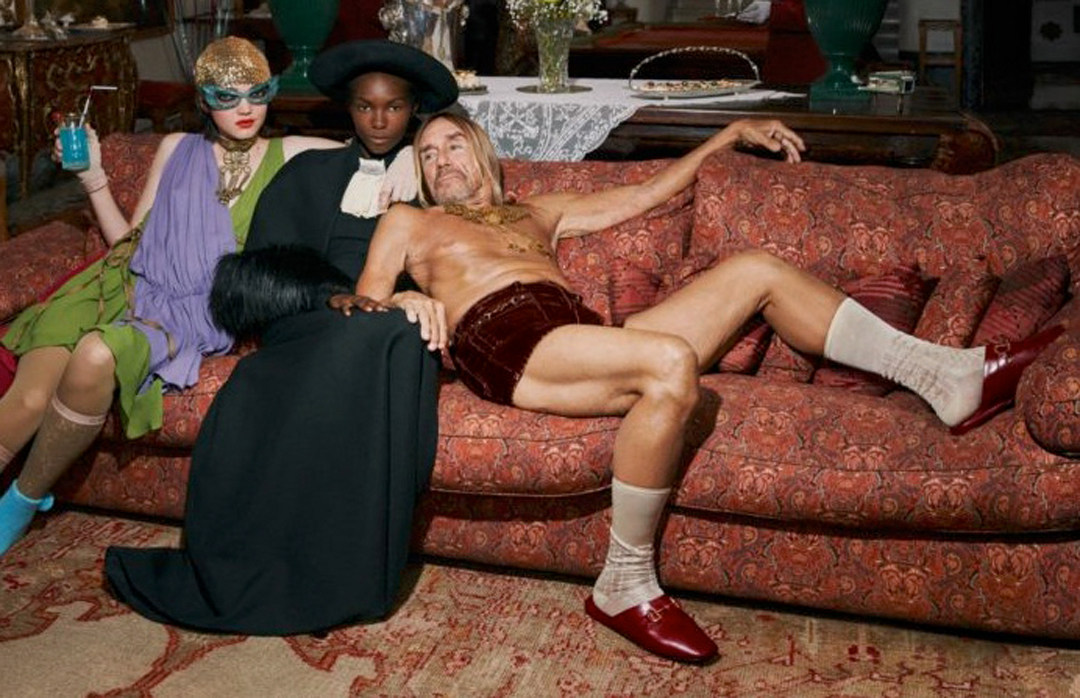 Is Cool Agless? This essay from the site The Ageist…But is Anna Wintour cool? That could be just me!

Seeing Iggy Pop (72) in the new Gucci Cruise 2020 video ad alongside Gucci Mane (39) and Sienna Miller (37) gave us pause for thought. Firstly as designers, we love the visual – kudos to director Harmony Korine. More deeply, we see Iggy just being Iggy. It’s cool and doesn’t raise any questions about his age.

Gucci is throwing a ‘Come As You Are’ party, and everyone is invited. Everyone, that is, who belongs to that specific tribe. The tribe, in this case, self-defines as kitsch, fashion-forward, risque and slightly hedonistic. The point is that the tribe’s shared values are ageless. So, by default, its members are diverse and connected on a deeper level. Ageless tribes are cool. Gucci gets it.

Back to Iggy. Is he cooler now with age or just a cool older version of his cool younger self? Perhaps a better question is why is he still at it? He’s still taking risks and clearly isn’t done yet. Is his consistency actually the cool thing?

How about Bruce Springsteen? He’s cool. He just turned 70 and has failed [awfully] and succeeded [spectacularly] on his life’s journey, but he was consistent in what he loved doing and is still doing it.

Vivienne Westwood (78) continues to dance unapologetically to her own unconventional tune, yet never fails to command relevance. Let’s face it – nobody wants to read another story about an old rocker in tights on tour defying the social narrative.

In the conversation around cool and age, there is a place we call ‘Planet Celebrity’ that comes up from time to time. It’s not really a real place, so you have to be careful drawing analogy, but can we glean any useful insights from its older inhabitants? We have the ongoing careers of people like Bryan Ferry (74), Diane Von Furstenberg (72), Sir Norman Foster (84), Sir Paul Smith (72), Anna Wintour (69) and Armani (85) to thank for veering us away from status quo and down the path of ‘modern sophistication.’

These cats all seem to bring an increasingly ‘sophisticated, yet humble cool’ to the party. Is this apparent ease due to a higher level of self-actualization only achievable with age and worldly experience? Debatable. Their continued relevance? Unquestionable.

Nobody said it would be easy. The likes of Iggy and Vivienne were all vilified at some point in their lives. Only with time have the general public adopted and appreciated the paths they stuck too. But they were all unapologetic in what they were doing. They believed in the process and that they were on the right path—seemingly oblivious to what others thought. They gave themselves permission.

So what’s the takeaway here? Can we learn anything from the older inhabitants of Planet Celebrity? We think that ‘coolness’ is a perception others have about an individual’s journey and their ‘lifestyle.’ But what all these individuals did was stay faithful to what they were passionate about – as much as at the age of 17 as they were at 70 and beyond. Failures and successes are the gifts of the journey, and there is no endpoint because you die on the inside when you give up your passions.

Remember, we are only old once and there is beauty in being proud of who you are. So, in addition to being a decent human being, be true to yourself no matter how eccentric, madcap, left field or weird your thing is – that’s what being cool as f is.