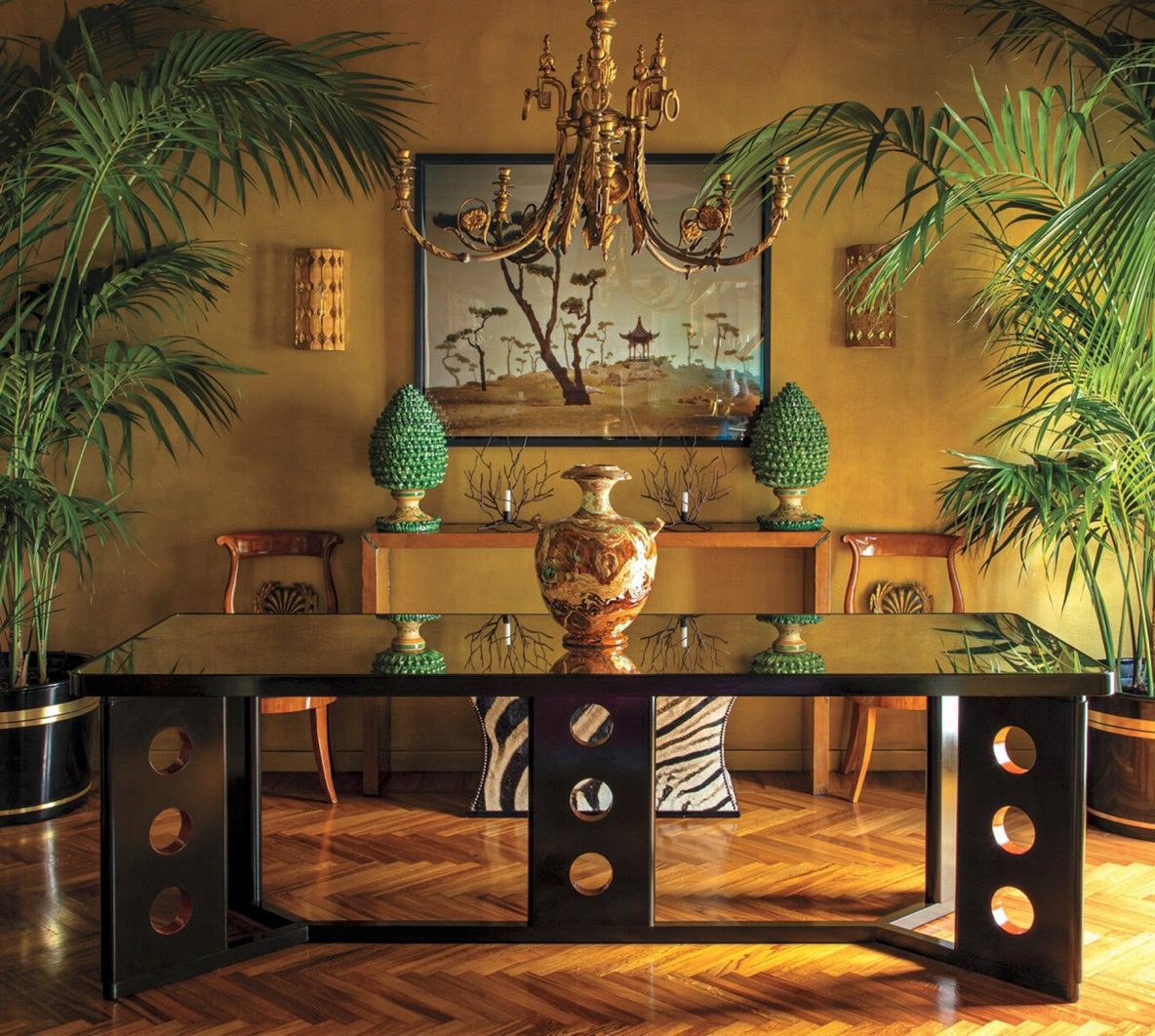 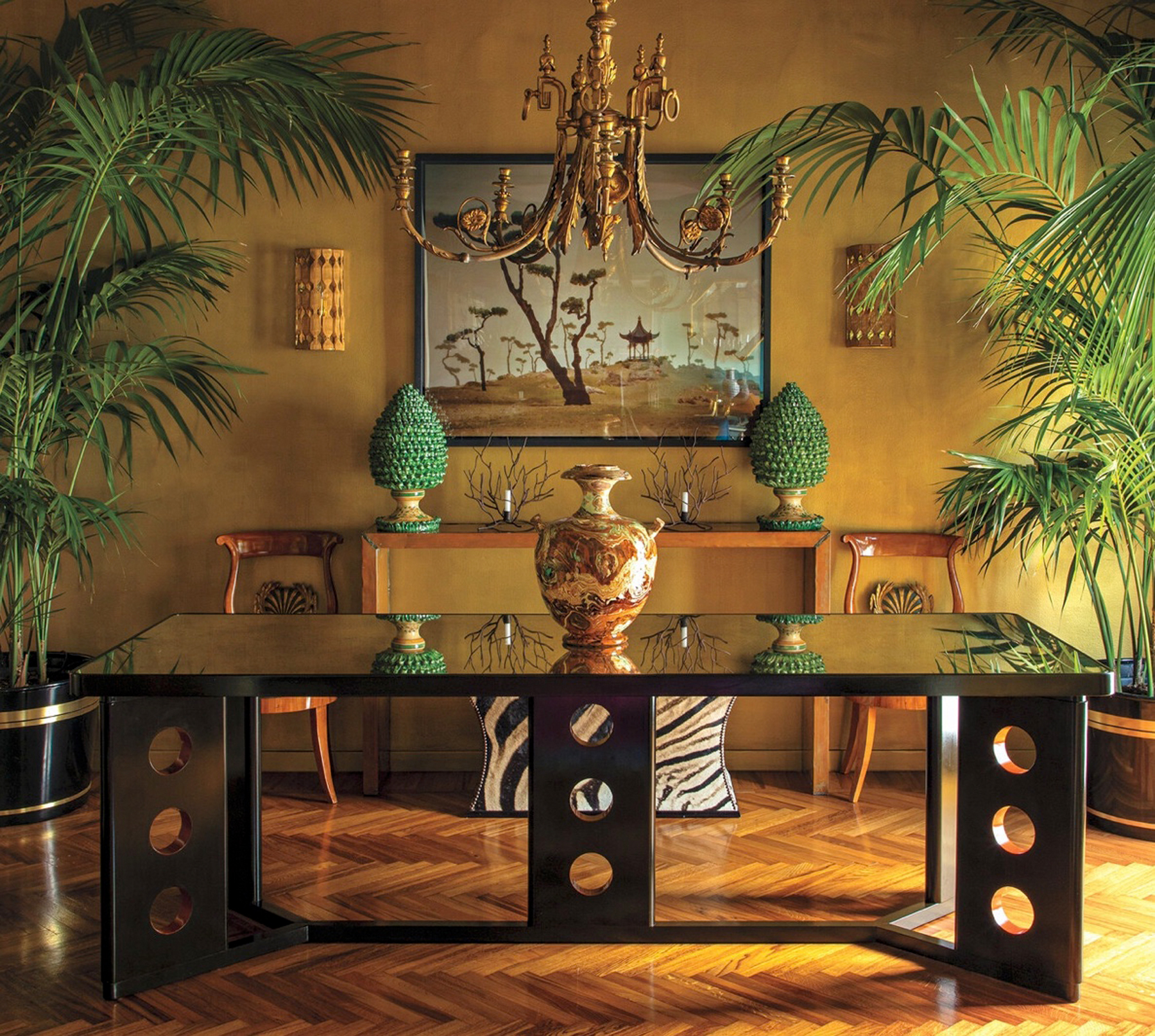 A Colorful Homecoming for a Milanese Designer
After living around the world, Nicolò Castellini Baldissera has returned to the city in which his family — and his heart — has always resided.

OF ALL OF ITALY’S big cities, Milan seems the least like a cozy hometown. Rome’s ancient ruins and joie de vivre make it warmly livable, and Venice’s canals evoke intimacy and romance, but Milan is all business. After being largely destroyed in the bombings of World War II, it was rebuilt in the decades that followed as the fast-paced, often unlovely center of the fashion and design industries.

But for the 52-year-old Milan-born interior designer Nicolò Castellini Baldissera, moving back recently after more than three decades, during which he ricocheted between London, Paris, Gstaad and Tangier, has been the gentlest of repatriations. “I found Milan very confining when I left as a young man,” he says. “But now it feels as though coming back was inevitable.” 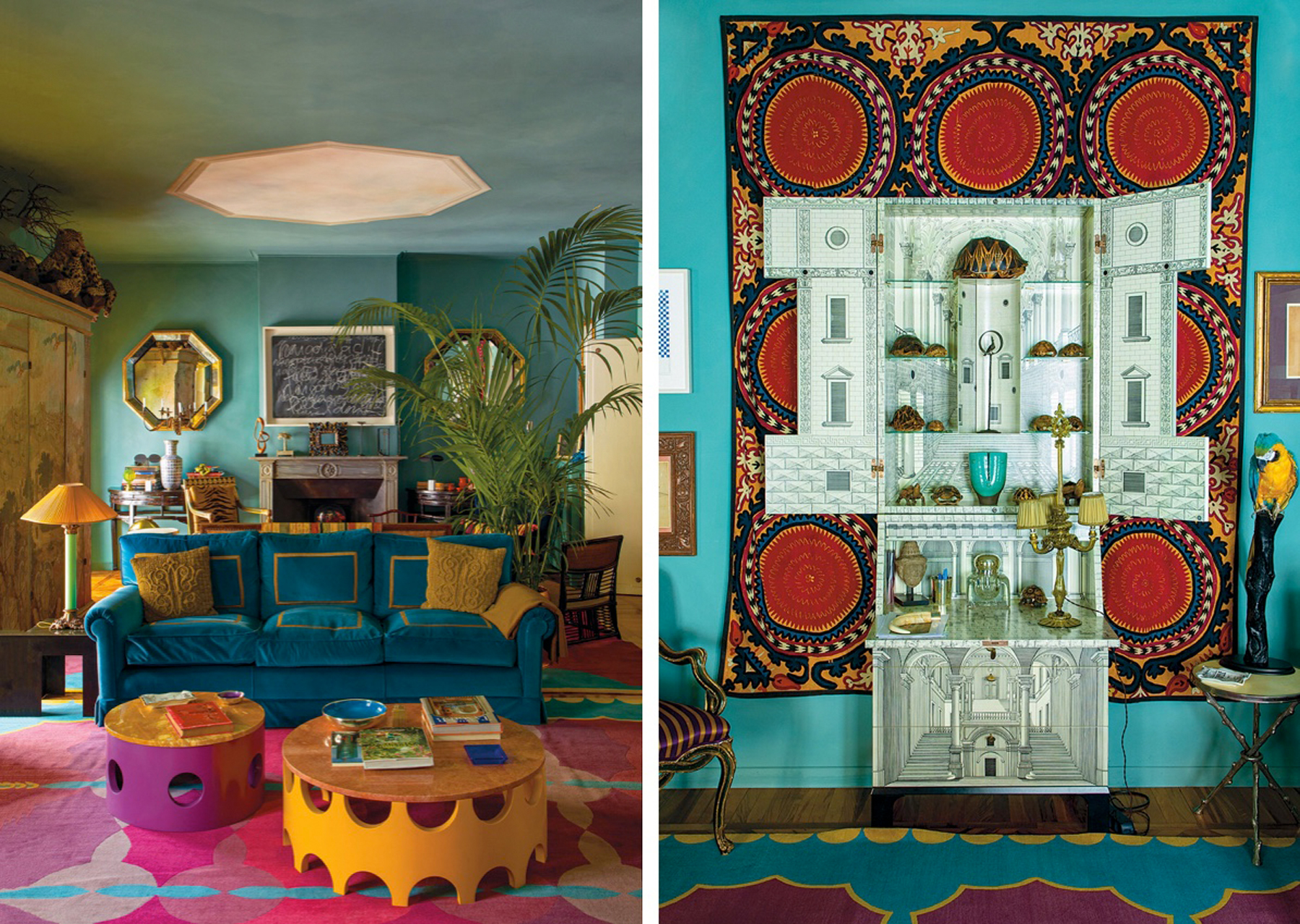 It’s easy to understand why Castellini Baldissera might once have found the metropolis of three million claustrophobic: Reminders of his illustrious family are scattered throughout the city. His paternal great-grandfather was Piero Portaluppi, the legendary architect responsible for scores of important buildings throughout Milan, including Villa Necchi Campiglio, the 1935 Modernist mansion made famous as the setting for the director Luca Guadagnino’s 2009 film, “I Am Love.” In fact, the film’s elegant (and fictional) Recchi family is rumored to have been based on the Castellini Baldissera clan, into which Portaluppi’s daughter — Castellini Baldissera’s grandmother — married. With interests in finance, real estate and textiles, the family has been an essential part of Milanese society for centuries: As a boy, the designer’s first checking account was at a bank that bore his surname. His father, Piero Castellini Baldissera, 82, is a well-known architect who, with his cousin Emanuele Castellini, started the luxury textile house C&C Milano in 1996. 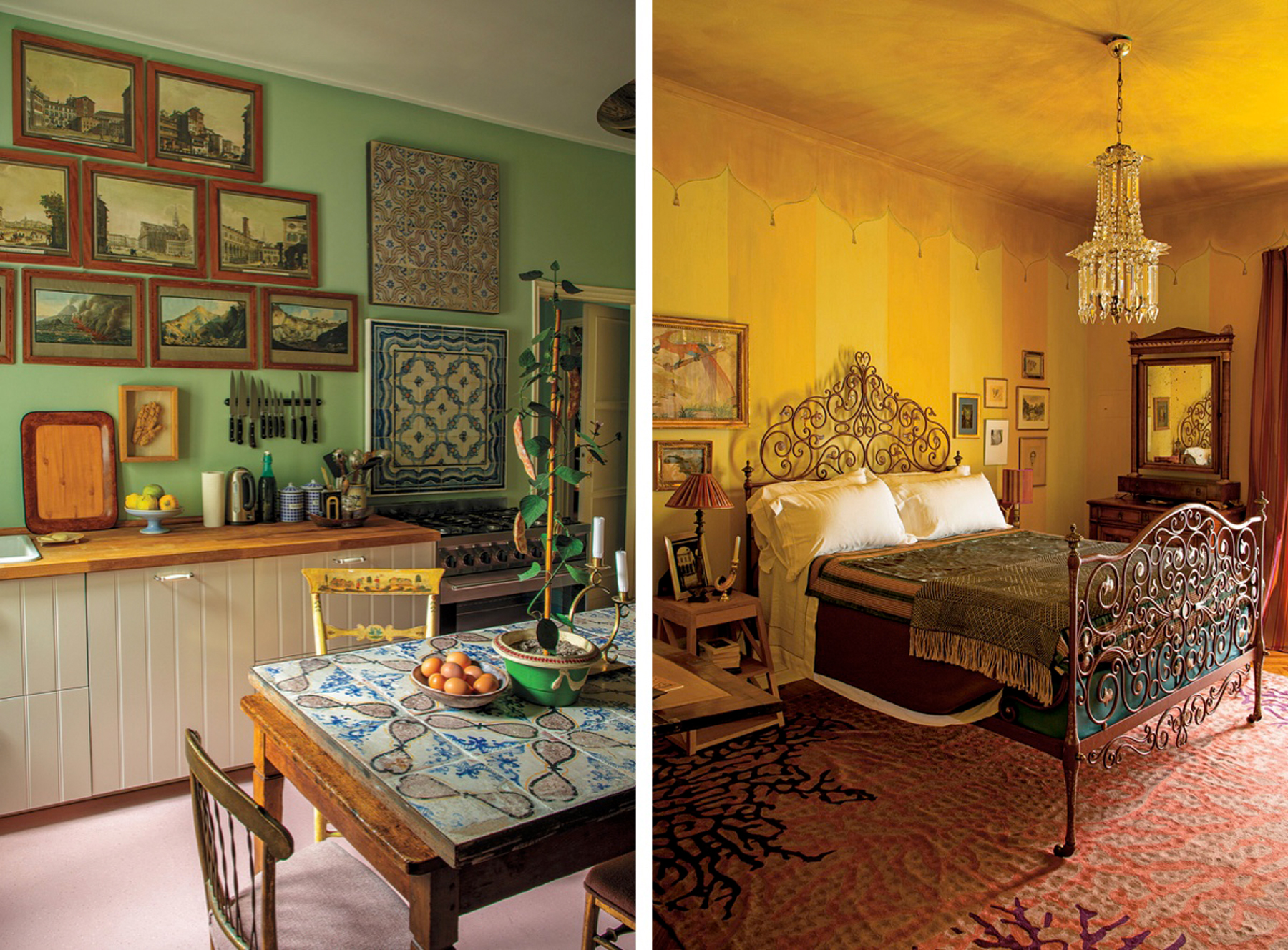 Growing up, Castellini Baldissera and his siblings, whose parents were divorced, lived with their mother, who died in 1998 (she was a descendant of the opera composer Giacomo Puccini) in a capacious Modernist apartment in a Portaluppi building that now houses the Fondazione Piero Portaluppi. His father lives a block away in a flat in the famed 15th-century Casa degli Atellani on Corso Magenta; Portaluppi had redone the building in the 1920s and had himself lived in the same space until his death in 1967. “When you’re young, being around that can be a little overwhelming,” Castellini Baldissera says.

At 18, he left to study art history at Sotheby’s in London, buying a Victorian-era house in Chelsea, which he did up in a vibrant if traditional English style, with fleurs-de-lis and deep red silks. Later, he and his wife raised a family in homes in Notting Hill and Knightsbridge. Over time, he developed an affinity for combining deeply saturated colors in unexpected ways — aubergine with sunflower yellow, hot pink with mauve — and for mixing antiques with thrift-shop discoveries. In 2009, he bought a tall, boxy house in Tangier’s medina whose terraces and gardens were created by the landscape designer and writer Umberto Pasti, where Castellini Baldissera now lives for several months a year. Called Casa Tosca — a nod to his forebear’s masterpiece — it was among the homes he included in his 2019 book, “Inside Tangier: Houses & Gardens.” 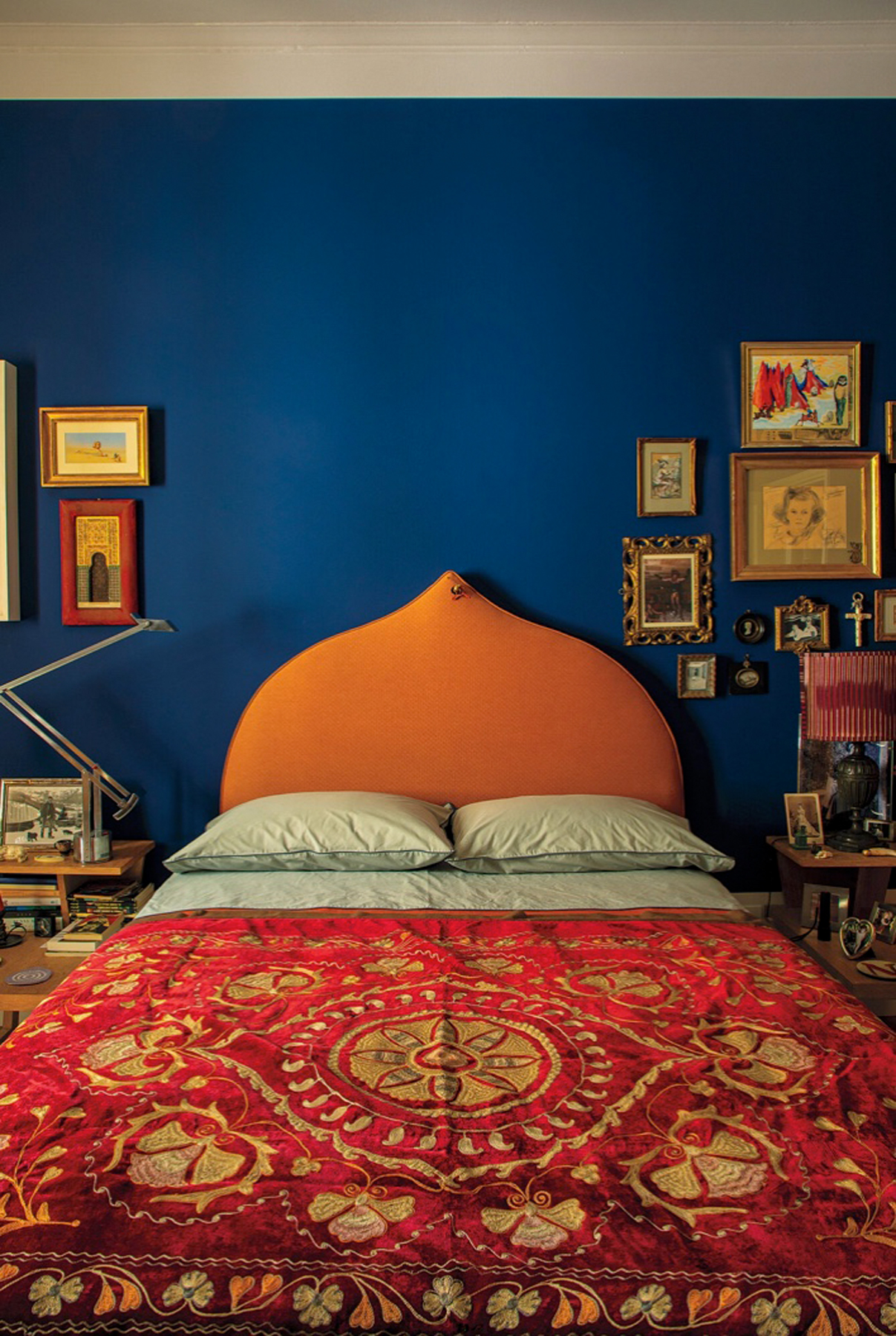 STILL, HE WAS restless. His father was getting older, and Milan, which the younger Castellini Baldissera had fled so many years before, had become a less rigid, more innovative place, re-energized by Salone del Mobile, the annual design fair. The fashion, art and design worlds had become entwined, culminating in the 2015 completion of Fondazione Prada’s cultural complex in a former distillery on the city’s southern edge. There was a new appreciation for the midcentury Modernist buildings that once had been dismissed as charmless. Castellini Baldissera found himself wanting to leave London, and his instinct was to return, at last, to where he began.

And so, in 2019, he began the search for an apartment with his romantic partner, Christopher Garis, 32, a Connecticut-born freelance editor and design consultant. Castellini Baldissera knew he didn’t want to be in his staid childhood neighborhood, so he concentrated instead on Brera, the lively art-gallery-filled neighborhood north of the Duomo.

In April of the same year, they found an apartment in a turn-of-the-20th-century building on a quiet street with plenty of small local businesses. The lobby still has its original neo-Classical appointments — marble walls and terrazzo floors — but the flat had been stripped of most of its charm, painted white and staged with “one sad sofa in front of a massive TV,” Castellini Baldissera says. 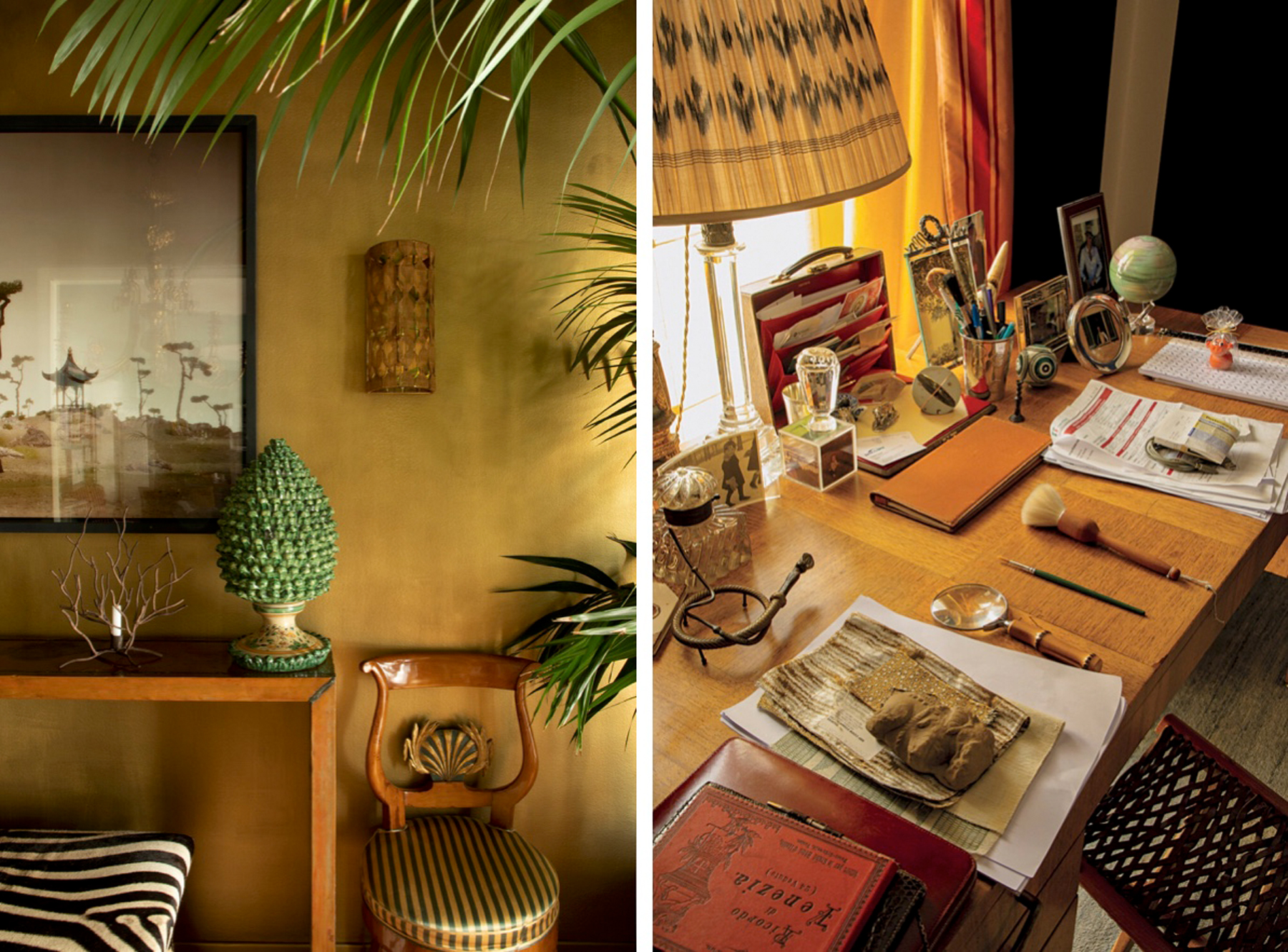 Within the year, through a pandemic, and without any real structural changes, he transformed the 2,800-square-foot, three-bedroom residence into a lush, idiosyncratic and bohemian retreat. “When you can’t just rebuild, you have to be very creative,” says Castellini Baldissera. “You have to look deeper, in a way.” For him, as usual, the key is to begin with a shocking yet unexpectedly harmonious palette. Here, the walls of the shell-pink entryway have been hand-painted by artisans at the bespoke wall-décor company Pictalab with a motif based on the frescoes of fanciful trees in a parlor of the 18th-century Tivoli Palácio de Seteais in Sintra, Portugal. The living room has teal walls, and the dining room is burnished gold. The main bedroom is painted Prussian blue, and the guest room has straw-colored striped walls crowned with trompe l’oeil tasseled sconces that evoke the sleight of hand perfected by Renzo Mongiardino, the groundbreaking midcentury Italian production designer and architect.

Castellini Baldissera loves to move; he considers each new residence an opportunity for reinvention. But he never takes all his furnishings with him. Because he creates entirely new environments each time, his method has sometimes been to sell pieces from his former homes — Christie’s recently sold a number of his possessions — which frees him to scour antique shops, auctions and flea markets for new things. There is also a warehouse-cum-upholstery factory in Brianza, the historic center of Italy’s furniture manufacturing business, a one-hour drive north of the city, where his father keeps furniture; the two men often “shop” there for pieces that they trade between themselves. Mixed in are some of the modern yet whimsical pieces he designs, such as a lofty sofa upholstered in natural-colored rattan and reed matting and Moroccan-style stackable cedar side tables painted in high-gloss hues of mustard, indigo or turquoise, for Casa Tosca, his own line.

In his living room, for example, near a sofa in petroleum-blue C&C Milano velvet and a pair of brightly painted round Casa Tosca tables, hangs a suzani in shades of scarlet and apricot bought in the market in Tangier; against it he has placed a new prize: a black-and-white cabinet by the eclectic 20th-century artist and designer Piero Fornasetti. In the bedroom, he has designed an ogee-curve headboard covered in tangerine linen; pinned to it is a coral cradle charm from Trapani in Sicily. The dining-room table was inspired by a bronze model that Portaluppi made for Casa Corbellini-Wassermann, a private residence in Milan he designed in the 1930s that was recently turned into an art gallery by the dealer Massimo De Carlo; Castellini Baldissera’s homage is made in lacquered wood with a mirrored top that reflects the gold walls.

But for all his embrace of newness, there are always items that Castellini Baldissera manages to take with him from place to place, reminding him of the past — both his own and the centuries-old relationship his family has had with exquisite objects. A large, taxidermied Seychelles tortoise he bought when he lived in Paris, from the auction house Drouot, stands in the entry hall; a branch of faux red coral, acquired in his 20s after he moved to London, occupies a niche nearby. And then there is the oil portrait of his maternal grandmother by the Italian painter Guido Tallone, presiding over it all. “She always comes with me,” he says. That both of them have returned to Milan, a place simultaneously familiar and new, brings him unexpected peace. “Coming back has been as nice for me as leaving was,” he says. “How many people are lucky enough to be able to say that?”