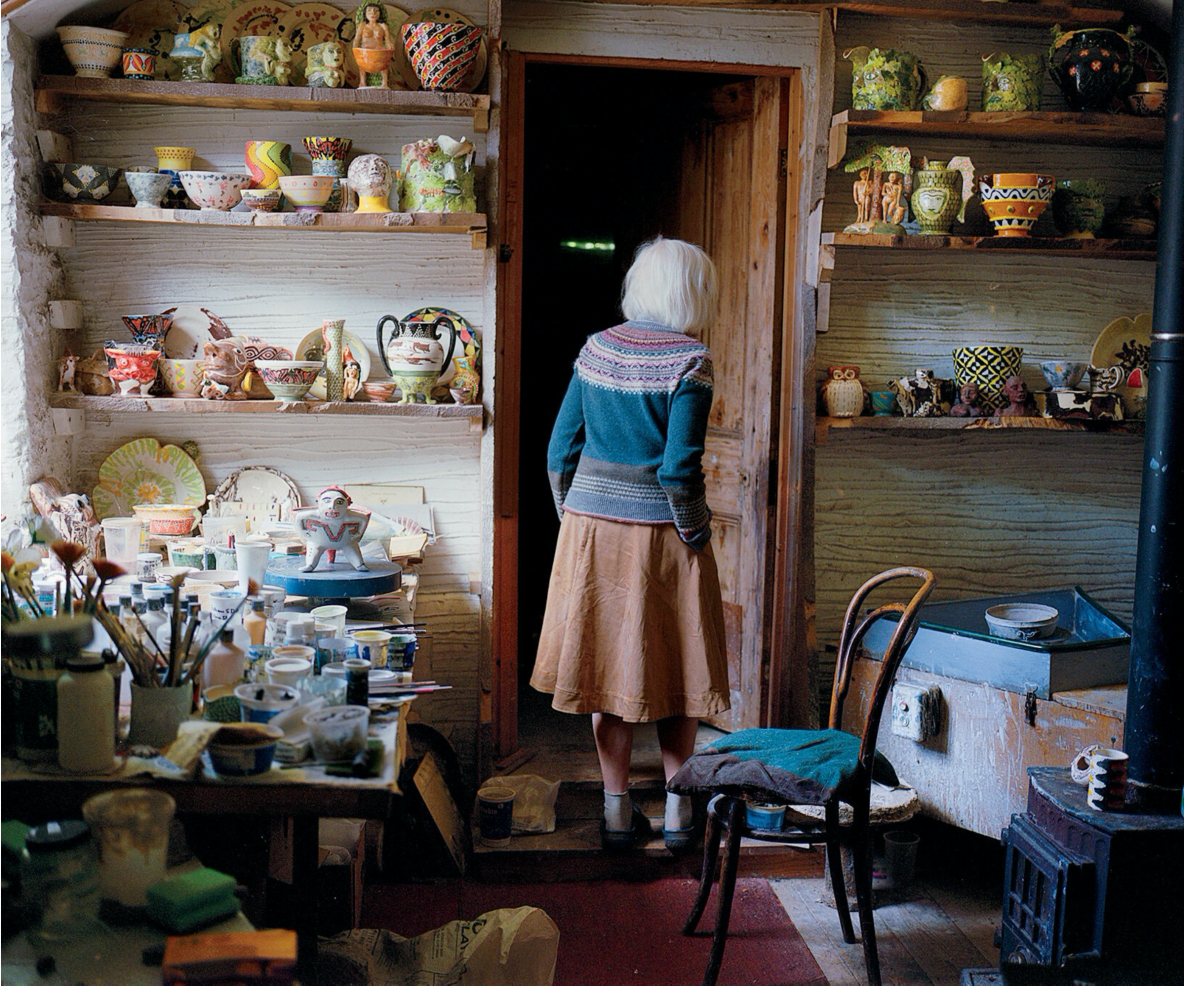 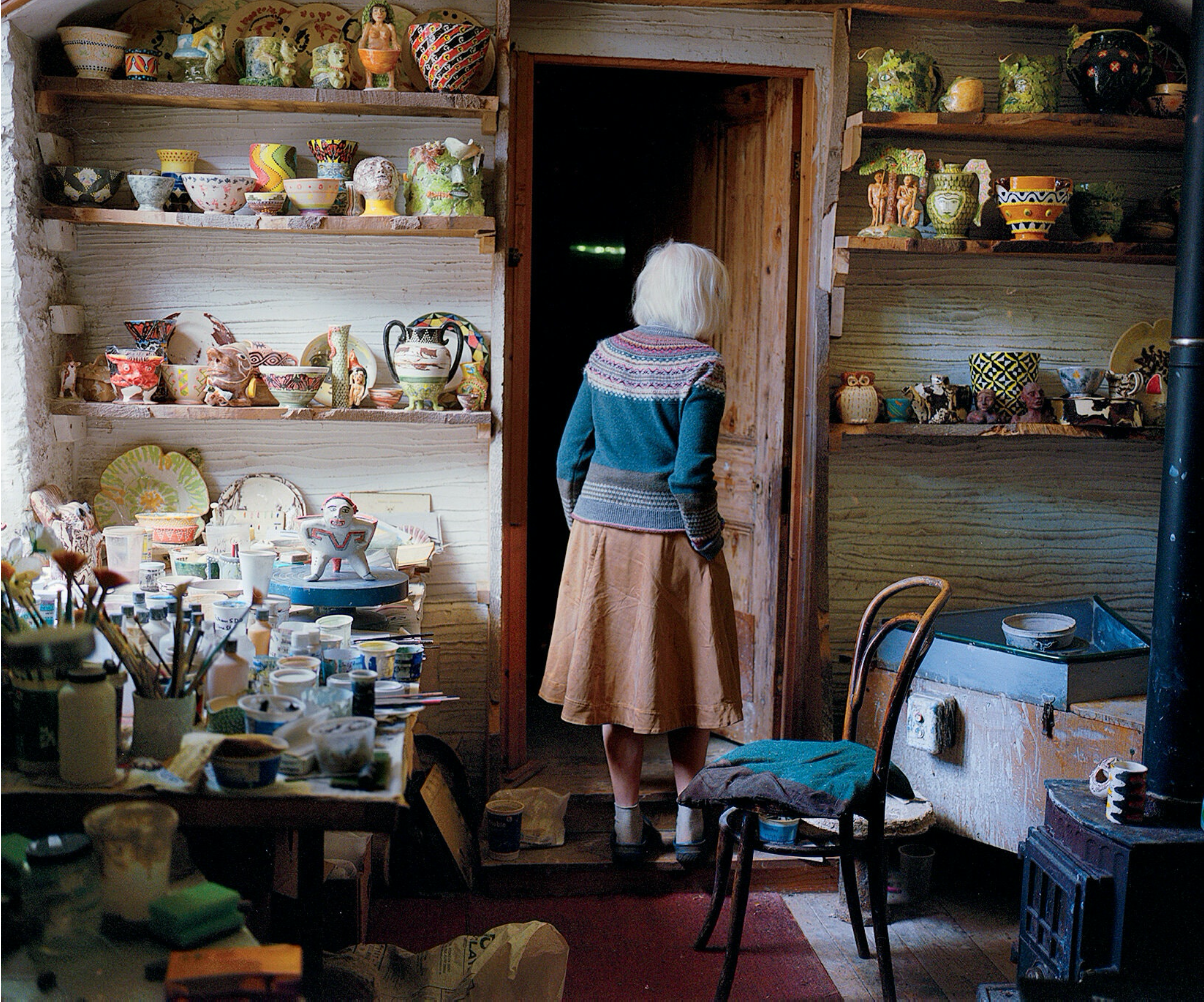 In Somerset, the artist Prue Piper has spent decades forging connections between her pottery, her garden and the myths entwined with the landscape.

FIRST-TIME VISITORS TO the ceramist Prue Piper’s house are typically late, and readily forgiven for it, because the place, a charmingly ramshackle former 19th-century laundry in Somerset, England, nestled among 11 acres of garden, orchard and woodland, is nearly impossible to find. For one, it’s in a village, Marston Bigot, that hardly exists except in name (its growth was stymied in part by the 14th-century bubonic plague). And then there is the driveway, the entrance of which is marked only by a rusted iron sculpture, made by Piper’s adult son Henry, that hides in waist-high overgrowth. The property’s integration into the surrounding patchwork of rolling fields and wild hedgerows is exactly what prompted Piper, 83, and her husband, the artist Edward Piper, to move here in 1967. 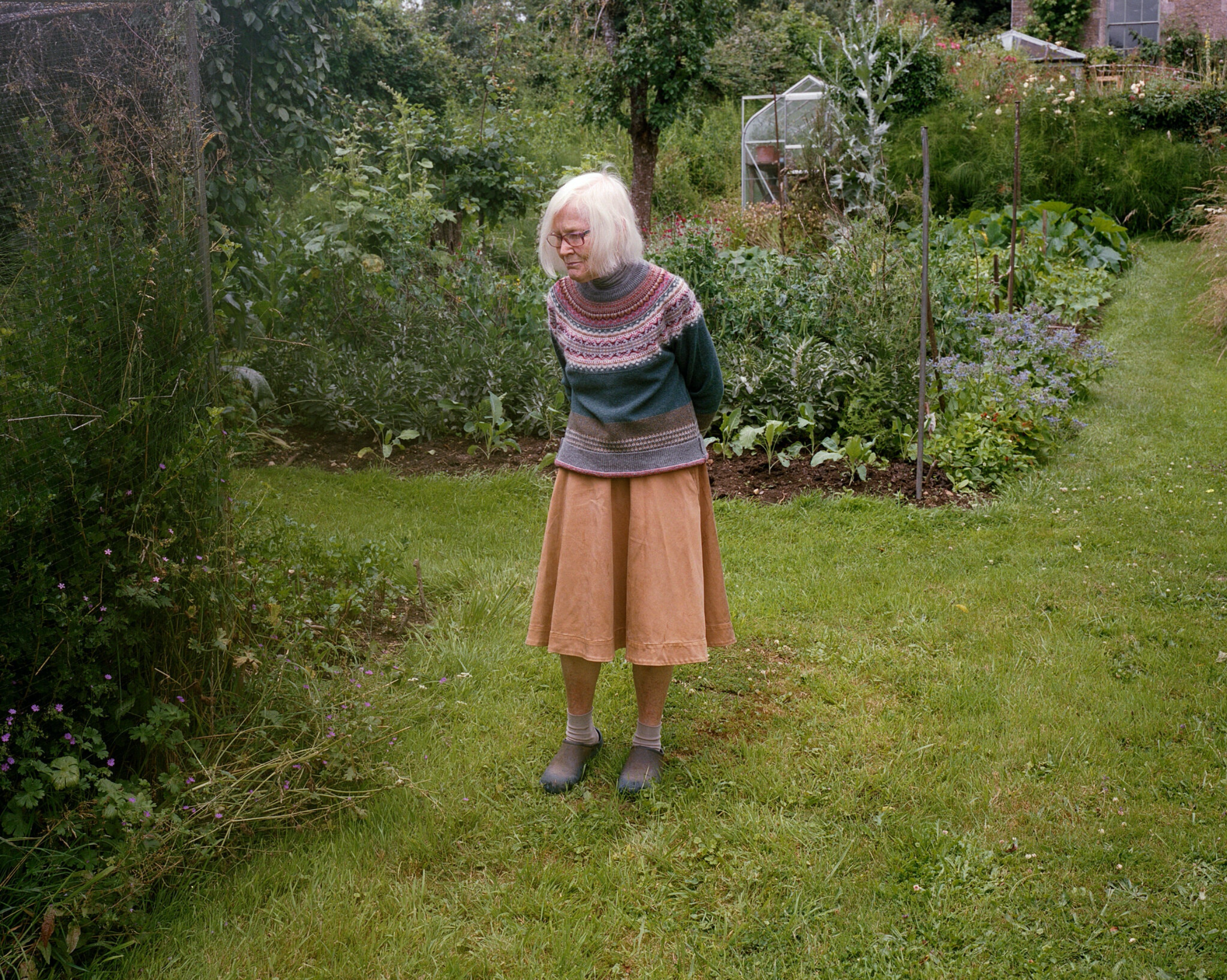 The couple had met in London in the late ’50s when they were both enrolled at University College London — he was studying fine art; she was majoring in biochemistry but, she says, “doing an awful lot of dancing to jazz and going to parties.” After a stint living in Northumberland, decided to move back closer to the city when they found out they were expecting their first child (their two sons, Luke and Henry, are now in their 50s and are also both artists). They bought the house at auction for 4,050 pounds and, while even the auctioneer admitted it was so derelict it should have gone for less, the couple saw in it a place to raise a family, make work and support themselves. Piper revived the square, field-bordered garden at the southern edge of the property, which soon yielded abundant vegetables, while her husband set up a painting studio in the west arm of the low, horseshoe-shaped limestone house, overlooking its central brick courtyard. Edward died in 1990, but Henry now lives in his father’s former work space with his own family — his wife, Janine, and their three children — and Piper herself has never left, acquiring along the way a brood of chickens, for eggs, and a flock of Wiltshire Horn sheep, for meat. Organized by practical ideas of multigenerational, self-sufficient living and largely unmarked by modern interventions, it’s a fitting home and studio for an artist who describes her work — which comprises vividly decorated vessels inspired by wildlife, folklore and ancient civilizations — as “a celebration of preindustrial cultures.”
Read More From T’s Design & Luxury Issue

Piper first took up ceramics in the ’70s, and was encouraged by Edward’s father, the celebrated British landscape painter John Piper. The older artist made work in clay himself at a pottery near Fawley Bottom farmhouse, the famously lively Oxfordshire home where he and his wife, the critic and librettist Myfanwy Piper, entertained friends such as the poet John Betjeman and the artist Alexander Calder in the 1930s. Piper later took classes — though she is still largely self-taught and prefers to coil, rather than throw, pots, after which she carves into or embellishes their surfaces — and in the ’80s set up her own studio in the easternmost part of her home, which had previously housed the children’s bedrooms. Over the decades, she has shown her ceramics with a few London galleries, gaining acclaim for her whimsical, antiquity-inspired forms and expressive, almost faux-naïf reliefs and intricately painted scenes of mythic creatures and woodland animals. These pieces have recently found a devoted following among a younger set, thanks in part to a growing interest in British handicrafts and to the rise of a certain colorful, eclectic approach to decorating epitomized by the gallery and antiques store 8 Holland Street, which sells Piper’s pieces at its three outposts; an exhibition of her work will open in the shop’s new Bath location next month.
Editors’ Picks 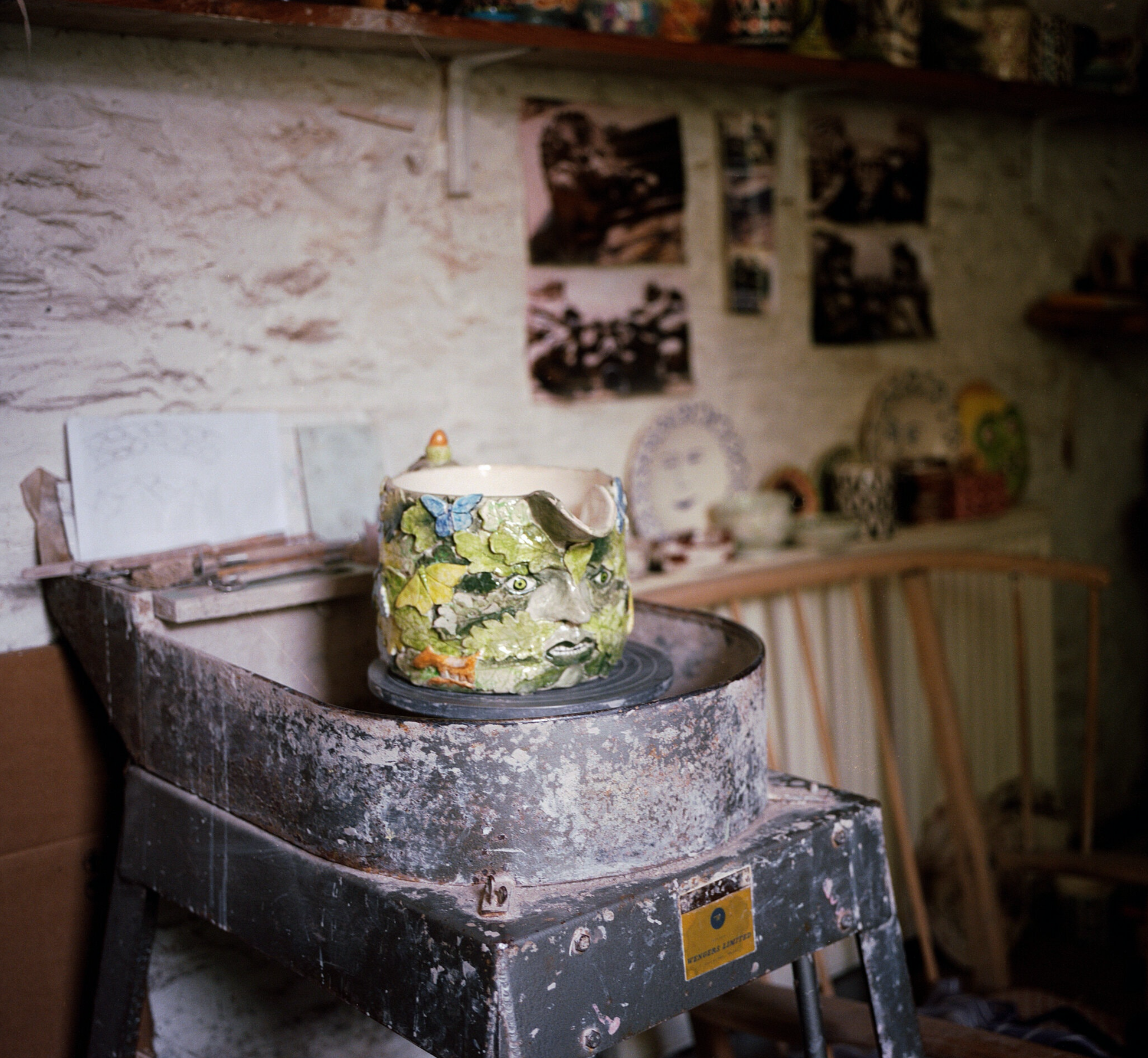 TODAY, THE ARTIST’S small, rectangular studio — barely bigger than a mudroom, with roughly plastered white walls and wide floorboards — is bordered by simple wooden worktables topped with pots of tools and paintbrushes, glaze samples and reference books, which range from a catalog of ancient Costa Rican artworks to a “Shell Guide,” one from her collection of the lyrical 20th-century travelogues about British counties. A slip-splattered wheel sits to the right of a cast-iron wood-burning stove whose pipe ascends into the cobwebbed crook of the ceiling above. Lining the walls are rows of roughly hewn shelves supporting dense arrangements of Piper’s work: a series of squat cylindrical vases from which the torsos of green-haired mermaids jut in high relief, their scaly tails curled around the bases; a small lidded pot shaped like a tawny owl with taloned feet; and endless iterations of thick dinner plates and stocky jugs on which wide-eyed faces peer out from delicately sculpted oak leaves. These last pieces, which depict the Green Man — a legendary figure, often associated with vegetation and fertility, with origins that date back to sculptural heads decorating 11th-century European churches — are among Piper’s most recognizable and express her lifelong interest in both the local landscape and its past. Since she was a girl in London gathering newts from the ponds of Richmond Park, she has felt a deep affinity for the natural world, and an abiding regret for mankind’s mistreatment of it. While she agrees with a friend’s recent observation that her work has become “looser” over the years (though she jokes this is simply because her eyesight has gotten worse), it has always celebrated flora and fauna — fish, for instance, have been a recurring motif — and the cultures that honor them. Industrialization, she adds, “has been hard on nature,” and on humans, too. 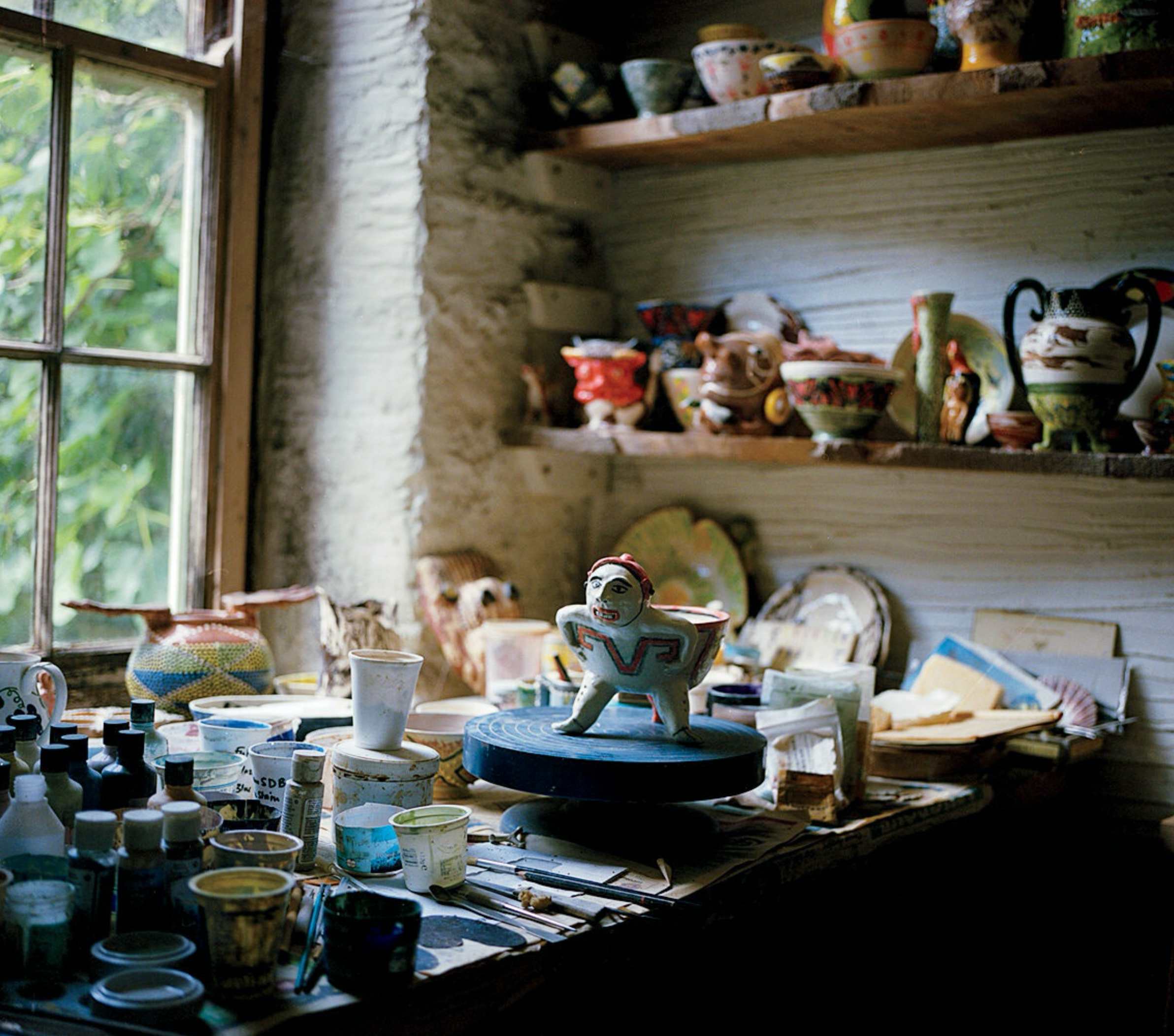 Her gardening and her pottery, then, are her way of redressing that damage. These days, it’s the former activity that often takes precedence. During the spring and summer, Piper is too busy sowing seeds and maintaining her rows of cucumbers and beans, lettuces and radishes to think about clay. And in the fall, she’s picking apples from the property’s orchard that Henry presses to make cider, or bottling preserves — jars of plum jam and green tomato chutney fill the shelves in the kitchen that abuts her work space. It’s only in the winter months, when the demands of the garden are less, that she has time to return to the studio (she produces a dozen or so pieces a year), working late into the evening, warmed by the heat of the kiln. Still, on a sunny day in June, there is a half-finished pot on the wheel that she’s been keeping wet and refining slowly in between hulling strawberries and watering purple anemone heavy with honeybees. If both pursuits have their season, they are always entwined: Walking up the driveway, a visitor might look down and notice shards of pottery mixed in with the gravel. When one of Piper’s plates has become too chipped to use, she will crush it into fragments and scatter them along the path. There, eventually, the clay will return to its original form, replenishing the earth from which it was borrowed.